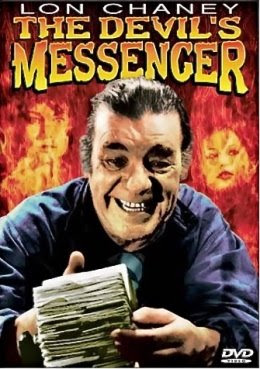 The Devil’s Messenger, released in 1961, is in fact three episodes of a Swedish TV series called 13 Demon Street cobbled together with a framing story featuring Lon Chaney jnr as Satan. What it looks like is three episodes of a TV series cobbled together with a framing story. I’ve never really been a fan of the anthology movie (with a couple of notable exceptions including Dead of Night and Asylum). This one is no worse than the average. The framing story (always the biggest potential weakness in this sort of movie) is particularly feeble, but Lon Chaney jnr makes a fun Devil.

The essence of the three episodes that comprise the bulk of the movie is that the chosen victims are offered an illusion leading to temptation. In the first two stories, one about a photographer and one concerning an anthropologist who discovers a 50,000 year-old woman frozen in the ice, the temptation is to lust. The second story gives the lust angle a definitely kinky twist. The third story involves love gone wrong, leading to revenge.

In the first installment a photographer takes a picture of a house. There is no-one in the picture, just the house, but the photographer sees the image of a woman. He is maddened by the image, and by the lust it incites. The second segment involves the unearthing of frozen woman, with whom an anthropologist becomes obsessed in a very unhealthy way indeed. The third story has a man tortured by a dream. Believing he can destroy the dream’s power by finding the building in which the dream takes place, he becomes involved in a struggle against his destiny.

The stories are all fairly low-key, but that approach works reasonably well. The emphasis is on the weaknesses that already exist in the victim’s characters, and the inevitability with which those weaknesses lead them to their doom. There are no stunning surprises, but the atmosphere of moral degeneracy, the very dark tone, and Lon Chaney’s outrageous performance make it an entertaining enough way to spend 70 minutes, especially if you don’t approach it with excessively high expectations. It’s not classic cinema, but it’s fun.

I’d love to know if the whole 13 Demon Street TV series (which was apparently filmed in English) is available on DVD.
Posted by dfordoom at 01:45