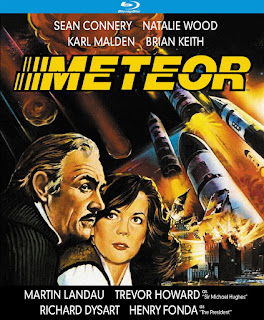 Meteor was one of the last of the 1970s disaster movies. In some ways it’s the most ambitious of all - the fate of the entire planet is at stake. Unfortunately it combines high ambitions with a limited budget and woefully inadequate special effects.

Dr Paul Bradley (Sean Connery) is a former NASA scientist who is urgently summoned to deal with a crisis. A very big crisis. A new comet had been spotted a week or so earlier. Nothing surprising in that, new comets appear regularly. This one was headed for the Asteroid Belt and as luck would have it the Americans had a manned space probe already on its way to Mars. NASA’s chief thought it would be a cool idea to divert the probe to get a good look at the comet. They ended up getting much too close a look as the comet ploughed into one of the larger asteroids, Orpheus. The asteroid broke up and now the fragments are headed towards Earth. One of these fragments is rather large - about five miles across - and it appears to be on a collision course with Earth.

Dr Bradley’s help is wanted because he was the man behind Project Hercules, a satellite armed with fourteen nuclear missiles designed for the specific purpose of dealing with just such an emergency. Unfortunately the decision was taken that rather than have the missiles aimed into outer space so they could intercept rogue asteroids they should instead be aimed at the Soviet Union. Now NASA needs someone who can realign the satellite to shoot down that pesky asteroid. 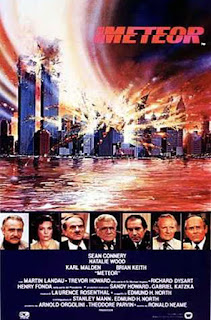 The obvious thing to do is to talk to the Russians. Since the Russians are also well aware of the approaching asteroid it isn’t too hard to get them to agree to send the astrophysicist responsible for the design of their satellite to the US to consult with Dr Bradley. Dr Dubov (Brian Keith) assures Dr Bradley that the Russians have no such satellite but speaking entirely hypothetically if they had built such a satellite it would have been armed with sixteen missiles and it would indeed have been placed in orbit exactly where the Americans believe it to be. And yes, purely hypothetically of course, it would then be possible to combine the striking power of Peter the Great and Hercules. And yes, he would be quite happy to give Dr Bradley the necessary information to realign this hypothetical satellite to aim its missiles at the asteroid.

Dr Dubov had been accompanied to the US by his trusted assistant and interpreter Tatiana (Natalie Wood). Tatiana is a widow (her cosmonaut husband had been killed a few years earlier) and Dr Bradley is separated from his wife. No viewer is going to be surprised when they take a bit of a shine to one another.

Dr Bradley and his team, along with Dr Dubov, head for the top-secret launch command centre of Project Hercules, cunningly concealed beneath New York. With the (hypothetical)  Russian satellite they now have thirty nukes, enough to deal with menacing asteroids. In theory. The trouble is that no-one has ever tried blowing up an asteroid before so no-one has any idea if the plan will actually work. meanwhile smaller fragments of Orpheus are already hitting the Earth, causing widespread devastation. If the missile plan doesn’t work it’s goodbye to civilisation. 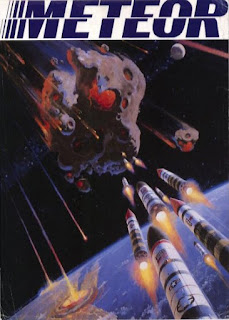 As far as disaster movie plots go this one is no sillier than average and Meteor had the potential to be a disaster movie classic. This is however an American International Pictures  production, with the sort of parsimonious budget you expect from AIP. Had the movie been released a decade or two earlier nobody would have worried about the iffy special effects. They would have been regarded as par for the course for sci-fi movies and people would simply have enjoyed the movie as an exciting B-picture aimed at the drive-in market. By 1979 however audiences expected every sci-fi movie to look as good as Star Wars. And judged by the standards of Star Wars the special effects in Meteor just don’t cut it. They don’t cut it at all. In fact they’re basically 1950s standard. Of course for someone like me that’s no problem - it just adds to the fun. But it certainly was not going to help this picture at the box office.

The Project Hercules headquarters in a disused subway station beneath the Hudson River is quite a cool idea and looks good.

Meteor does benefit from an impressive cast. The characterisation is practically non-existent so what the producers needed were actors with charisma and energy who were not afraid to go over-the-top. Sean Connery, with charisma to burn, was an ideal choice as the hero. Karl Malden is very good as the NASA chief. Henry Fonda makes a brief appearance as the US President and he manages to look grave and presidential which is all that was required of him. Martin Landau goes gleefully berserk as a disgruntled general.  For some reason it was decided to make the Russian scientist, Dr Dubov, unable to speak English. This means that Brian Keith has to deliver all his dialogue in Russian. Dramatically this does work pretty well. In fact he pretty much steals the picture with a deliciously excessive performance - he even gets to sing! In Russian! Since she’s playing a Russian interpreter Natalie Wood gets to practice her Russian as well. And since she’s an astrophysicist as well as an interpreter her character actually serves some purpose. 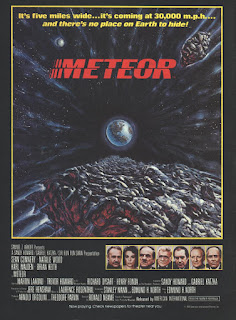 Ronald Neame had directed The Poseidon Adventure a few years earlier so he must have seemed like an obvious choice to direct Meteor. In fact Meteor does have a few very Poseidon Adventure-like moments in its later stages. Given the pitifully inadequate special effects budget Neame does his best and he keeps things reasonably exciting.

This very much a movie from the age of detente, when (relatively) peaceful co-existence and even limited co-operation between the two super powers seemed to be entirely possible. There are no bad guys in this movie. Both the Americans and the Russians were equally at fault in building satellites with missiles aimed at each other, and both are equally willing to work together to save the world. Dr Dubov is not only the most interesting and entertaining character in the film he’s also a thoroughly charming fellow.

Sir Run Run Shaw was also involved in the production of this movie, which undoubtedly explains the scenes of Hong Kong menaced by a tidal wave.

The Kino Lorber Blu-Ray looks splendid although it’s disappointingly lacking in any extras at all.

No sane person would attempt to argue that Meteor is a great movie, or even a good movie. It is however quite entertaining if you’re prepared to accept ridiculously cheap special effects as a feature rather than a bug in a science fiction disaster movie.