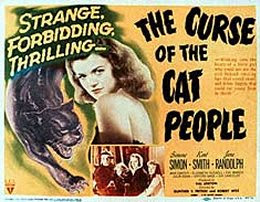 The series of horror movies produced by Val Lewton for RKO in the mid-1940s are not only among the greatest of all horror movies, they’re also among the most unconventional. And horror movies really don’t get any more unconventional than The Curse of the Cat People, made in 1944. It’s really a fairy tale about a disturbed child, and about being deprived of love, and about dysfunctional families. There are some disturbing images and some moments of horror, but this is a movie that really pushes the boundaries of the horror genre. It starts with what seems the perfect all-American family, but it’s soon obvious that all is not well with 6-year-old Amy (a stunning performance by Ann Carter). Amy is distant and distracted, and the other kids don’t like her. Her parents are pretending that the events that occurred in Cat People never happened and that Ollie’s first wife, the tragic Irena, never existed, but Amy’s mother suspects that Amy is cursed by the dead Irena (which is the only reason the title makes any sense at all). Meanwhile Amy has acquired an invisible friend. There’s also a sub-plot about an ageing actress who, as a result of an accident, does not believe her daughter Barbara is really her daughter. The daughter (played very effectively by Elizabeth Russell) has lived her entire life from the age of six without any love at all from her mother.

Apparently the shooting of the movie was chaotic, with director Gunther von Fritsch being fired and replaced by Robert Wise, and with Lewton insisting on the ending being reshot completely. The plot is a strange conglomeration of elements, but in spite of this and the chaos of the shooting the movie holds together extremely well. Nick Musuraca again contributes some magnificent cinematography. The way he photographs Elizabeth Russell is especially impressive. In fact the way he photographs the three main female characters – Amy, Irena and Barbara – is impressive. This is a sensitive and beautiful movie, which is not the way one normally describes horror movies. A brilliant movie.
Posted by dfordoom at 03:13