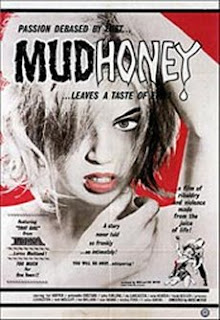 If you’re only familiar with Russ Meyer from movies like Beyond the Valley of the Dolls or Supervixens then his 1965 movie Mudhoney is going to come as quite a surprise. It has the sudden eruptions of violence that also feature in Faster, Pussycat! Kill! Kill! but it’s much darker, and much grimmer. Yes, it has huge-breasted women, and some nudity, and some of the characteristic and rather black and bizarre Russ Meyer humour, but mostly it’s an unrelentingly serious and very disturbing movie. Set in a small town during the Depression, it tells the story of an ex-convict called Calif who takes a job as a farm hand. His employer is a woman named Hannah, who lives on the farm with her kindly father and her violent alcoholic husband. The husband spends most of his time at the local whorehouse. He’s just waiting for dear old dad to die so he can sell the farm from under his wife and take off with the money. When Calif falls in love with Hannah a train of violence and madness is set in motion, partially fuelled by an hysterical and almost certainly insane preacher who has decided that both Hannah and Calif are adulterous spawn of Satan.

This is one of the most savage and uncompromisingly negative portrayals of American small town life in movie history. It has the lot – small-minded townsfolk, a bigoted preacher, mindless violence, drunkenness, lynchings, rape, mob violence and more inbred rednecks than you’ve ever seen in one movie. As usual in a Russ Meyer movie, the most sympathetic characters are the women – there’s Clara Belle, a good-natured and fun-loving whore; her mute sister Eula, also a whore; and Hannah herself, a typical strong and very sexual Meter woman. Apart from Calif, the men are mostly violent or ineffectual or both. Or, in the case of the preacher, crazed as well. To me the movie seems like a classic example of American gothic at its best. Meyer’s satire is rarely subtle, but it’s undeniably effective. Hal Hopper is superb as the drunken husband. It’s a savage little movie that still packs a punch, and I highly recommend it.
Posted by dfordoom at 02:06