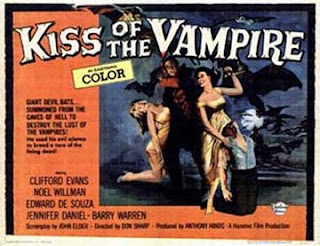 After the huge success of the first Hammer Dracula movie it was, surprisingly, eight years before Christopher Lee played the role again. Hammer were unwilling to cast anyone else in the role, but vampires were good business and they were equally unwilling to forego making vampire movies. So instead they made a couple of quite interesting vampire films without Dracula – Brides of Dracula in 1960 and Kiss of the Vampire in 1963. Kiss of the Vampire was also the first Hammer film to be helmed by Australian director Don Sharp, who went on to make the excellent Rasputin: The Mad Monk for them in 1966. The plot of Kiss of the Vampire is a stock-standard horror movie plot. A young couple are motoring through the countryside (in about 1900 judging from their car) when they run out of petrol. They find an inn, the locals are (naturally) very secretive and seem a little afraid, and they get invited to a party at the home of a wealthy doctor. They receive a warning to take care at the party, the warning coming from a mysterious middle-aged drunk who appears to have some private sorrow of his own (and the spectacularly effective opening sequence at a funeral has given us a fairly good idea what that sorrow might be). They of course ignore the warning, and get themselves into all manner of strife at this unusual social gathering. Fortunately it has other things going for it besides the plot. It’s possibly production designer Bernard Robinson’s finest moment. The vampires in this film do not live in gloomy, cobweb-infested gothic ruins – they live in a house that is all colour and light and brightness, filled with bizarre objets d’art. It’s both gorgeous and magnificently decadent, which is appropriate since these vampires are also both beautiful and decadent. I want to live in their house! These are not quite your standard Hammer vampires. They are able, some of the time at least, to walk in the open during the hours of daylight. Dr Ravna and his family (yes, this is a vampire who is also a family man) appear to be a normal, happy family. Appearances are of course deceptive, and it soon becomes apparent that this is not a normal family at all. There’s a tendency in vampire movies for vampirism to be something that happens to you through carelessness or bad luck, but in Kiss of the Vampire it’s explicitly linked to deviant behaviour. You get in with a bad crowd, and you’ve taken the first step on the road to becoming a vampire. It’s certainly not the only movie (or even the only Hammer movie) to connect vampirism with sexuality, but it is unusual in suggesting that the sexual deviance comes first and that it’s the factor that exposes you to the risk. It’s a somewhat unpleasant idea but it does add some interest to the film.

The movie lacks the familiar names associated with Hammer horror but it doesn’t really suffer as a result, and all the players give decent performances. It’s available on DVD as part of Universal’s Hammer Horror Franchise Collection, eight movies on two double-sided discs with no extras, but at a very reasonable price, and it looks terrific. I don’t regard Kiss of the Vampire as one of the great Hammer movies but it’s definitely interesting and slightly out of the ordinary and it is definitely entertaining.
Posted by dfordoom at 00:07