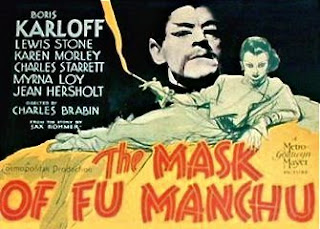 The Mask of Fu Manchu was MGM’s 1932 attempt to make a horror movie more outrageous, and with more sex and horror, than Universal’s huge recent hits, Dracula and Frankenstein. With Boris Karloff starring as Dr Fu Manchu, this is a glossy and quite spectacular movie with some truly superb set design.

The tomb of Genghis Khan has been discovered, and both the British Government and Dr Fu Manchu are determined to get hold of the most precious of the relics contained in the tomb, the mask and the sword of the great conqueror. Fu Manchu intends to use these symbols to make himself the modern successor to the great Mongol warlord, and to assume the leadership of all of Asia in a war to the death with western civilisation. Nayland Smith (Lewis Stone) of the British Secret Service must prevent this from happening while also trying to rescue the eminent archaeologist Sir Lionel Barton, kidnapped by Fu Manchu’s agents to be used as a bargaining counter. Along with Barton’ daughter Sheila (Karen Morley) and handsome square-jawed hero Terry Granville (Charles Starrett) Smith sets off to foil this fiendish plot.

What makes The Mask of Fu Manchu possibly the ultimate pre-code horror film is the way it explicitly links the sex and the horror. The sado-masochist sexual tastes of Fu Manchu’s daughter Fah Lo See (played by Myrna Loy) are very obvious, and in several memorable scenes we see her becoming very excited by the prospect of inflicting torture. Even more daring is the scene in which she has Terry whipped (while she yells “Faster! Faster!”) and then seduces him. Loy is delightfully wicked. If Loy provides the kinky sex, then Karloff provides the high camp, and he does it with style. It’s this very marked tongue-in-cheek approach that mostly prevents the movie from being especially offensive (apart from one very distasteful scene right at the very end). Karloff and Loy are in fine form. Karen Morley’s insanely histrionic over-the-top performance works in the context of what is, after all, pure melodrama, and adds to the fun.

The Mask of Fu Manchu ran into immediate problems with the censors, but oddly enough its biggest censorship problems came in the 1970s when it was hacked to pieces to remove references that were regarded as racially offensive. The recent DVD release, as part of the Warner Home Video Legends of Horror boxed set, was taken from a recently discovered camera negative and is completely uncut. On the whole it looks sensational, and it’s now possible to see why this movie has had such an outrageous reputation. It’s a good deal of fun if you don’t take it seriously, and it’s difficult to imagine how anyone possibly could take it seriously, especially with Karloff’s deliriously campy performance.
Posted by dfordoom at 00:31