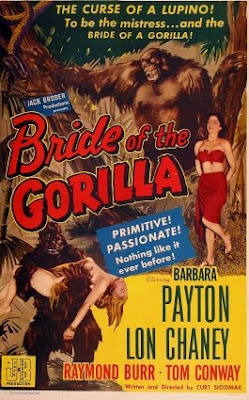 Bride of the Gorilla, written and directed by Curt Siodmak (brother of the more celebrated Robert Siodmak), boasts an all-star cast. Well, an all-star cast of low-budget movie actors anyway - Lon Chaney, Tom Conway and Raymond Burr (always fun in B-movies). It has a great B-movie title, and the central plot idea does have potential. Unfortunately what it doesn’t have is a budget, so we get lots and lots of stock footage of assorted jungle creatures and only the most feeble attempts at special effects for the man-into-monster transformation scenes.

Raymond Burr is Barney Chavez, the overseer of a plantation somewhere in the Amazon rainforest. Which of course explains the title, the gorilla being the most feared of all denizens of the Amazonian jungles. He has fallen in love with the young and very beautiful wife of the owner of the plantation, but if he is to have her he will have to do something about her ageing husband. His actions cause an elderly witch to place a curse upon him, by the use of a plant that has magical powers. The curse will make him appear to be, to himself and to the inhabitants of the jungle, a wild beast.

Tom Conway plays the local doctor and part-time coroner, and he’s also in love with the plantation owner’s wife. Lon Chaney is the local police chief, a native of the rainforest who has received an education and is now torn between civilisation and the ways of the jungle.

Sadly the movie is not quite as much fun as it sounds. Due to the lack of budget it’s quite talky and (again due ti the zero budget) almost all the action takes place offscreen. If you’re expecting lots of excitement as the man-gorilla rampages through the countryside spreading death and destruction you’re going to be very disappointed.

The acting is reasonable B-movie acting,with Tom Conway charming but oily and slightly sinister as always, Lon Chaney vaguely tortured, and Raymond Burr effective as the villain of the piece driven by lust and greed. Barbara Payton (better known for her tragic and lurid private life) projects a nicely smouldering sexuality as the faithless wife. It’s entertaining enough in a bad jungle movie kind of way.
Posted by dfordoom at 16:35

The idea of seeing both Lon Chaney jr. and Raymond Burr in the same movie seems very interesting, I must say.

(this is beautyofheart from lj)

if I recall correctly, gorillas are native only to the rain forests of Central Africa, and not South America. ;) Love this sort of thing when it's overlooked by movies.