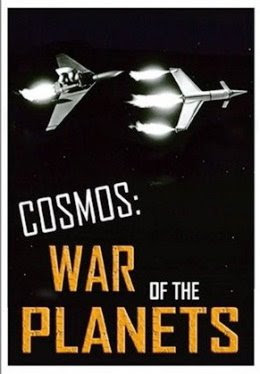 I wasn’t even aware of Alfonso Brescia until I read a recent review of his early sword and sandal epic Conqueror of Atlantis, but that review was enough to make me anxious to see some of his movies, and as luck would have it I happened to have a copy of Cosmos: War of the Planets (Anno zero - guerra nello spazio) lying around. And what a deliciously and deliriously strange little movie it is!

It’s obviously heavily influenced by Star Trek, but this is a completely crazed bad drug-trip version of Star Trek. The story has something to do with a strange unidentified signal picked up from somewhere in the galaxy. Earth spaceship MK-31 is set to investigate, and ends up on a mysterious planet. There’s an insane super-computer, and a race of degenerated human-like creatures, both survivors of a war between humans and machines. That’s as much sense as I could get out of the plot, but if you care about things like plotting what on earth are you doing watching a 1970s Italian science fiction movie anyway?

It may not have a coherent plot, or even vaguely competent actors, but it does have other much more important things going for it. It has a soundtrack with lots of goofy electronic pinging noises. It has dialogue jam-packed with the most nonsensical technobabble you could ever hope for. It has ultra-cheap (and I really do mean ultra-cheap) but very trippy special effects. It has amazingly silly costumes. If, like me, you consider these things far more important than mere plotting then you should be well and truly satisfied.

It also has a manic energy to it. There’s always something happening, and even when it makes no sense it’s fun to watch. It has those moments of weirdness you only get in European sci-fi movies, such as people plugging themselves into machines to have a kind of virtual cybersex. And it has loads of style. In some ways it’s a bit like Mario Bava’s wonderful Planet of the Vampires, with sheer style and visual inventiveness triumphing over a ludicrously small budget and a lack of any real narrative drive. Brescia isn’t the brilliant stylist that Bava was, but he makes up for it with much more weirdness. If you enjoyed Planet of the Vampires or Antonio Margheriti’s Wild, Wild Planet then you’re going to love this one.

This is wildly entertaining high camp nonsense, and a must-see for lovers of the strange world of Italian science fiction movies of the 60s and 70s. I loved it.
Posted by dfordoom at 22:47