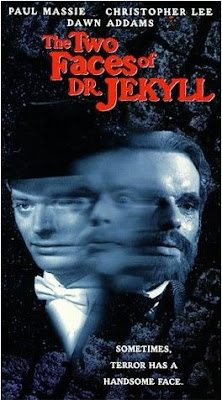 The more Hammer films I see the more convinced I am that the more obscure the Hammer film, the better it will turn out to be. A case in point being The Two Faces of Dr Jekyll. Made in 1960, it was one of two versions of Robert Louis Stevenson’s classic tale to be filmed by Hammer. Both it and the later Dr Jekyll and Sister Hyde are slightly off-beat adaptations of the story, and in their own ways both are excellent.

The Two Faces of Dr Jekyll was directed by Terence Fisher and stars Paul Massie in the central dual role. The initial transformation scene is particularly well done since we only see Mr Hyde’s back for quite a while, so we’re left in suspense wondering what kind of hideous monster Dr Jekyll has become. In fact there are no monster makeup effects at all. Mr Hyde is young and good-looking and really is just Dr Jekyll without his beard and in flashier clothes with a more outgoing personality. But it works. This Mr Hyde is, as he should be, no monster but merely a part of Jekyll’s own personality, the part that craves freedom from society’s rules, the part that wants to be a party animal.

It turns out Dr Jekyll’s wife also craves excitement. In a major departure from the original story she’s a bit of a part animal herself, and she has a lover, a debauched and profligate (and exceptionally unsuccessful) gambler, played by Christopher Lee. The fates of Jekyll and Hyde, Jekyll’s wife and her dissipated lover become hopelessly entwined. Hyde finds a lover of his own, an exotic dancer who performs a somewhat licentious dance routine with a snake, but Hyde is amused by the idea of also taking Jekyll’s wife as his lover.

Terence Fisher was renowned for his belief in a clear-cut struggle between good and evil which makes this movie a rather uncharacteristic one for him. This is a fairly sympathetic Hyde, who is reckless and irresponsible and rather childish in his selfish desires for pleasures rather than being evil as such. He’s like Dr Jekyll’s inner child become a juvenile delinquent inner child. The movie is also, for a Terence Fisher movie, just a little on the risque side. It was apparently cut for its original release but the recent DVD release (as part of the Icons of Horror boxed set) restores the cut sequences. It has a genuine atmosphere of decadance, especially in the scenes set in The Sphinx night-club. The drug-taking scenes in the opium den are pretty daring for 1960.

Paul Massie’s performance is one you’re either going to love or hate. I think he gets away with it. Christopher Lee has great fun playing a character who is neither hero nor villain and he’s delightfully slimy! Dawn Addams as Jekyll’s wife steals the picture though. She’s wonderfully wicked but without becoming a monster or a cliche.

The colours are amazingly lush and along with some splendid sets give the whole movie a kind of hallucinatory decadent feel. This is one of the more interesting movie versions of Stevenson’s tale and it’s vastly superior to both the 1932 and 1941 Hollywood versions. Highly recommended.
Posted by dfordoom at 17:11