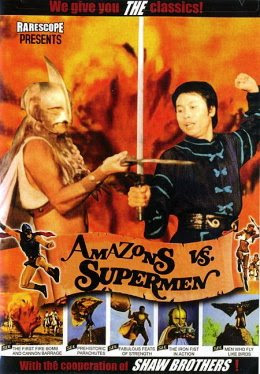 Alfonso Brescia’s Amazons vs Supermen (Superuomini, superdonne, superbotte) may well be the strangest movie you’re ever going to see. One of its many many alternative titles is Three Stooges vs the Wonder Women , and that, along with the fact that this is an Italian/Hong Kong/Mexican co-production, gives a fairly good idea of what to expect. This is a king fu superhero slapstick comedy.

A tribe of fierce amazon warriors is terrorising the communities of a valley somewhere or other. But the villagers are under the protection of Darma, a mysterious immortal caped superhero who has been fighting injustice and oppression for 400 years. Or at least he claims to be a 400-year-old immortal caped superhero; in fact he’s a middle-aged magician who relies on trickery. The amazons have a grudge against Darma; their queen wants the secret of the sacred fire that confers the gift of immortality. There’s also an African superhero, Moog, and a Chinese king fu master, Chung, although how they happen to be living in what appear to be a medieval European valley we never find out. Moog and Chung find themselves acting as slightly reluctant allies of Darma.

And then there are the bandits of the forest, remarkably incompetent slapstick bandits, and they’re trying to turn the conflict between the amazons and Darma to their own advantage. But I don’t want to give the impression that there’s a coherent plot to this movie. Nothing could be further from the truth.

I guess you really need to be a fan of slapstick humour to fully enjoy this one. It really is like a combination of an Italian peplum, a Hong Kong fung fu movie and a Three Stooges movie. With a very Three Stooges-type soundtrack. There’s plenty of weirdness, but I really prefer my movie weirdness without slapstick. There’s quite a bit of action, there’s a little romance, and lots of falling over.

The Rarescope DVD release is pretty unimpressive. The colours are drab and muddy and the picture is a tad grainy. There are no extras, aside from a few trailers. Amazons vs Supermen is certainly different.
Posted by dfordoom at 22:58

Peplum meets kung fu ... played for laughs. Need I say more? Possibly the worst sound track I have ever heard to boot.