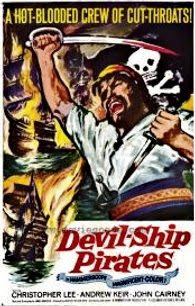 The Devil-Ship Pirates, released in 1964, was the last of Hammer’s pirate adventure movies. And, curiously enough, the only one for which the studio actually bothered to provide a pirate ship. In fact they built a small but fairly realistic galleon, after engaging the services of the man who built ship models for the National Maritime Museum. They spent £16,000 on the galleon, which in 1964 and for a small studio like Hammer was a considerable amount of money. The ship looks rather splendid, although as in Hammer’s other pirate movies these buccaneers spend most of their time ashore.

The idea behind the movie is quite a good one, and the movie is unusual for several reasons. Period settings for Hammer films were fairly standard, but this one is set in the 16th century so it has a slightly different kind of look. And some nice costumes. And while it might not be surprising to find Christopher Lee in command of the pirate ship Diablo, what is surprising is that he isn’t a dashing English corsair in the style of Sir Francis Drake, plundering the Spanish Main - he’s a Spanish pirate. At the beginning of the movie Captain Robeles is in fact a semi-reformed pirate, serving as a privateer in the service of the Kong of Spain, and forming part of the Spanish Armada. With the Armada defeated Robeles decides to return to piracy, much to the disgust of his second-in-command.

Before his plans can be put into action urgent repairs are needed to the Diablo and the nearest place to take shelter for that task happens to be a rather marshy stretch of the English coastline. The Spanish were not exactly Flavour of the Month in England in the summer of 1588 so they can expect a hostile reception from the local villagers, but Captain Robeles has a cunning plan. They will tell the locals that Spain was victorious and that they have come to take possession of this particular small piece of England on behalf of King Philip of Spain. They place a cordon around the village, but not everyone is convinced by their story of a great Spanish victory. With the militia on its way they must complete the repairs as quickly as possible, while maintaining control of the increasingly restive townspeople.

The biggest problem with the movie is that the characters are badly underwritten, and we don’t really know enough about either the heroes or the villains to become totally engaged. Listening to the commentary track makes the reason for this weakness very obvious, as screenwriter Jimmy Sangster cheerfully admits it was his standard practice to do no research at all for a script. Mostly it didn’t matter, but in this case a small amount of research might have allowed him to flesh out the characters a little. There’s potential for an interesting conflict between Robeles and his second-in-command, but we just don’t have sufficient background to understand why they detest each other so much. None of the characters really come to life. There is a love interest, but it’s very low-key and not very involving.

On the other hand, this is just a low-budget pirate adventure flick, so perhaps I’m asking for too much. It’s harmless fun, and director Don Sharp was always good at action sequences on a tight budget. It looks good, the ending is fairly spectacular, it has Michael Ripper overacting even more outrageously than usual as a Spanish pirate, and there’s the race against time as the pirates desperately try to get their ship ready to put to sea before English troops arrive and that adds the necessary dramatic tension. It’s more of a kids’ adventure movie than most of Hammer’s productions, but it’s still an enjoyable enough romp.
Posted by dfordoom at 10:39