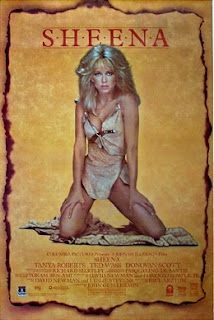 Sheena is one of those movies that raises the question - do the people running movie studios have any clue at all what they’re doing? Made in 1984 for a reputed $25 million (a sizeable sum by the standards of the time) it’s such an old-fashioned B-movie that it must surely have been obvious it had no chance of turning any kind of profit.

While Star Wars was also a B-movie and made a fortune at the box office, Sheena just doesn’t have the dazzling action sequences or the spectacle to match movies like that. It’s questionable whether such a movie was viable at all in 1984. The kinds of alternative distribution channels, such as the drive-in circuit, that made low-budget B-movies so profitable were rapidly disappearing. In the age of the multiplex such movies simply had nowhere to go, so it probably wasn’t going to work even on a modest budget, much less the sum that Columbia spent on it.

You also have to wonder what target audience the film-makers and the studio had in mind. It mostly has a Saturday morning kids’ TV kind of feel to it, with cute animals, action scenes that are mostly low on graphic violence, and a generally good-natured rather goofy ambience. But then there are the nude scenes, and the extraordinary number of shots with the camera positioned to shoot straight up Tanya Roberts’ skirt. Given that the skirt is almost non-existent to start with and she’s wearing nothing but an incredibly skimpy thong underneath, you can’t help being a little surprised they got away with a PG rating. On the other hand the movie handles its only major sex scene with amazing coyness. The impression it gives is that they were aiming for two different audiences, and the end result was unlikely to be entirely satisfactory for either. It’s a movie that either should have had a lot more sex and nudity, or a lot less.

As or the plot, it’s harmless enough by B-movie standards. Set in contemporary Africa, it has the wicked brother of an African king conspiring to murder his brother and claim the throne, so he can begin mining the sacred mountain of the Zambuli tribe. The Zambuli tribe is ruled by Sheena (Tanya Roberts), the daughter of two white explorers who managed to get themselves killed in the prologue. Sheena has been raised by the shaman of the tribe, and has all the usual Tarzan-like abilities to communicate with animals, travel by swinging from tree to tree, etc. Although she has lived among this remote tribe since early girlhood she still manages to look like she’s just had an appointment 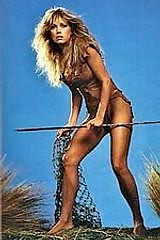 with a very expensive Beverly Hills hairdresser. Helping her in her struggle to save the sacred mountain are two American TV reporters. She naturally falls in love with one of them.

There are relatively bloodless battles with a band of mercenaries employed by the wicked prince, some fairly unspectacular stunts, a very moderate amount of excitement, and some rather chaste romantic scenes. There are also occasional moments when the level of violence escalates surprisingly, which again tends to indicate a fumbled attempt to reach two quite different audiences. And there are the killer flamingoes.

None of it really works as it was presumably intended to work. But luckily all of it works beautifully on the level of camp. What really makes this a camp classic though is Tanya Roberts. She delivers one of the most staggeringly atrocious and incompetent performances in the history of movies. She’s an absolute delight. The role of Sheena was apparently originally intended for Jodie Foster(!!!) which would certainly have made it a very different movie. I imagine Foster would have played the part in a much more self-consciously tongue-in-cheek way, which might have worked but I suspect it would have been less fun. Tanya Roberts is simply awesome in her awfulness. You have never seen acting like this before. She’s a goddess of camp. 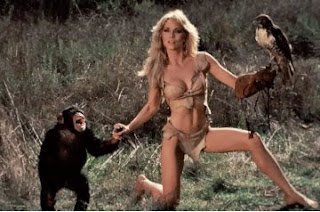 Columbia’s DVD release is an object lesson in how not to release a movie on DVD. The image is frequently grainy, and it’s fullscreen. And this is a movie that desperately needs to be seen in its correct aspect ratio. Without ever having seen it in its proper format I can still state this as an absolute fact - there were just so many shots that were simply butchered by being pan-and-scanned. And while this is a terrible movie, it’s a gorgeously photographed and extremely handsome terrible movie, and it would have been nice to see it properly. And there are no extras. The good news is that it’s available at rock-bottom bargain-bin prices if you shop around, and despite the horribleness of the DVD presentation it’s still worth picking up. What can I say? I'm a sucker for jungle girl movies, and this one is enormous fun.
Posted by dfordoom at 12:51