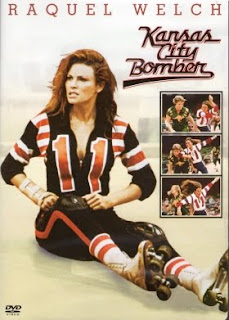 One of the oddest cultural phenomena of the 60s and 70s was the immense popularity of women’s roller derby leagues. They were a cross between pro wrestling and gladiatorial contests, but on roller skates. In the past few years they’ve made something a comeback, and have spawned a recent Hollywood movie, Whip It. But the original female mayhem on roller-skates classic was Kansas City Bomber , back in 1972.

This was the real thing. Or as close to the real thing as Hollywood ever gets. Raquel Welch is K. C. Carr, star skater of the Kansas City Ramblers and popularly known as the the Kansas City Bomber. In the rough tough world of the roller derby it’s easy to make enemies, and K. C. has made a bitter enemy of Big Bertha Bogliani. Big Bertha challenges her to a one-on-one no-holds-barred match race, and under the rules of the roller derby the loser will have to leave Kansas City forever. K.C. Loses, and finds herself traded to a team in Portland.

Unfortunately the team in Portland already has a star skater, Jackie Burdette, and Jackie is not well pleased at the arrival of a challenger for the title. They’re on the same team but they spend most of their time on the track trying to beat the daylights out of one another. K.C. has also attracted the attention of the manager of the Portland team. He’s a middle- 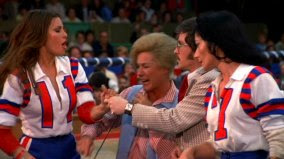 aged businessman, a little bit sleazy, but K. C is divorced and lonely and needs some masculine company. When the news gets out that she’s the manager’s girlfriend she finds herself with a crop of new enemies.

She’s also trying to be a mother to her two children (including a daughter Rita played a very young Jodie Foster) but it’s not easy being on the road all the time, and how own mother is always giving her a hard time. Why can’t she settle down down and marry the nice local store owner who ants to marry her. The fact that K. C. might want more out of life than marrying a local shopkeeper hasn’t occurred to her mother.

K. C. soon finds that the world of the roller derby is more cynical and vicious than she had realised, especially when one of her few friends, a male skater, gets victimised by almost everybody. K.C. is a very tough cookie on the track, but she has a few weaknesses. She is loyal to pe 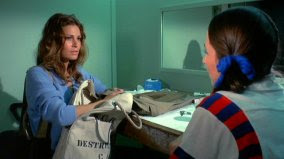 ople, she has some integrity, and she prefers to keep the aggression on the track. Off the track she’s just a woman looking for the same things everybody else is looking for - love, a home, friendships, a decent life for her kids. But she finds it’s just not possible to keep the increasingly bad feelings confined to the track. And and as Jackie spirals into self-destructiveness her bitterness towards K.C. grows.

Most of the performances are good, but this is Raquel Welch’s movie. Raquel Welch had the great misfortune to produce her best acting performances in movies that were either critical and commercial disasters (like Myra Breckinridge) or were the sort of movies the critics were never going to take seriously (like Kansas City Bomber ). It’s doubly unfair because one of her strengths as an actress has always been her willingness to take on the kinds of roles that are never going to get an actress an Oscar nomination.

This was her great opportunity to prove herself as a serious dramatic actress, and she gives it a pretty good shot. It’s an interesting role. K. C. is not a straightforward heroine, and she isn’t the kind of character who immediately tugs at our heart-strings. She has 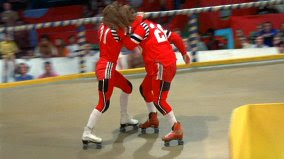 her faults, and she can be a cynical operator, but then her basic decency keeps getting in the way. She’s likeable, but not in an overtly emotionally manipulative way.

It was also a physically demanding role. Miss Welch did most of her own stunts, and sustained quite a few injuries during the course of filming. But it was worth it, since it’s obvious that most of the time it really is her on the track. And when she looks battered and bruised after a match, she’s convincing because she knew how it felt to be battered and bruised after filming the action scenes.

This is one of those low-key movies that I’m very fond of, not an Oscar-bait movie but a sensitive movie about real people. And in 1970s Hollywood, increasingly dominated by macho action movies and male-bonding buddy movies, this is very much a woman’s movie. It’s really a chick flick, but with a lot of extreme violence! A strange quirky movie but I liked it a lot.
Posted by dfordoom at 17:26

I didn't know this was on DVD! Awesome review, D! I used to love roller derby so much. Me and friends used to tune in on Saturday afternoons to watch it and it also used to come on at night, too. Roller Derby was great stuff. They tried bringing it back in the 90's, but that incarnation was right stupid. They sometimes had players wrestling alligators(!)

venoms5: Unfortunately the DVD of Kansas City Bomber is out of print. Copies are still around, but they're getting a little pricey. It's one to grab immediately if you see it anywhere. Raquel is awesome!