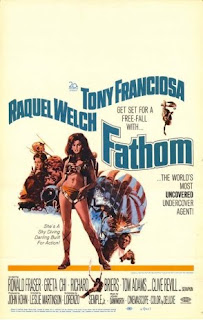 Fathom is one if those movies that works extremely well for what it is. If you expect more than it’s capable of delivering you’ll be disappointed, but if you accept it as a light-hearted adventure romp you’ll have a thoroughly enjoyable time with it.

It starts out giving the impression it’s another 60s spy spoof movie, but really it’s more of a spoof of crime caper movies.

Raquel Welch is the improbably named Fathom Harvill. She’s a dental technician who spends her weekends sky-diving. She’s a little surprised to find herself recruited by the British security services for a secret mission involving the recovery of a top-secret H-bomb component. At least the two guys who recruit her tell her they’re from British Intelligence, and that the Fate of Civilisation As We Know It is at stake. Fathom isn’t a fool and she’s sceptical, but it sounds like her part in the mission is fairly minor and not overly dangerous.

All she has to do is to accidentally land her parachute in the grounds of a house in Spain that is being used as a base by a couple of Red Chinese spies (played by Greta Chi and Tony Franciosa). This is when Fathom gets double-crossed for the first time, finds herself a murder suspect, and is told yet another very convincing tale.

-bombs, but rather with ancient Chinese treasure. There are three groups all trying to get their hands on the fabled Fire Dragon, and all of them have very convincing stories to prove that they’re the good guys and the others are just crooks, and all of them seem to need Fathom’s help. And since she’s been framed for more than one murder she doesn’t much choice other than to become more and more involved.

Fathom throws in lots of silly fun elements, from exploding ear-rings to speedboat chases and Fathom even finds herself in a bullring facing a rather annoyed bull. This is no James Bond film, it doesn’t have that kind of budget, but it has some reasonable stunts involving scuba diving, train chases, aircraft chases and car chases. And of course sky-diving.

e about this for a 1967 movie is that Raquel Welch is not the hero’s girlfriend, nor is she a helpless female who needs to be rescued constantly, nor is she there merely to provide glamour (although of course being Raquel Welch she does provide considerable glamour). She’s the action hero, and she gets to do the hero stuff herself. But she’s not an ice-cool professional lady spy/crime-fighter like Emma Peel. She’s a reluctant amateur who just happens to be smart enough and resourceful enough to deal with the situations she finds herself in. And since her hobby is sky-diving we accept that she’s athletic enough and brave enough to get away with it.

Raquel gets able support from Tony Franciosa as a smooth talker who could be anything from a private eye to a jewel thief to a spy. He’s the sort of guy who can char

m himself out of most situations. Richard Briers is an unlikely action hero, but then he’s not supposed to be a competent action hero. As the offsider of the mysterious Colonel Campbell he’s probably more dangerous to himself than to anyone else. Ronald Fraser is amusing as always as the man who may be a spymaster or a common crook. Clive Revill overacts outrageously as yet another mysterious stranger who wants the Fire Dragon.

But it’s Raquel Welch’s movie. She’s very much the star, and the success of the movie depends entirely on her performance. She’s more than equal to the task. It’s actually a nicely judged performance - she’s feisty but not

aggressive, smart but not annoying, competent at action hero tasks but not unconvincingly so, and she doesn’t do overdo the tongue-in-cheek approach. It’s a silly movie (and intentionally so) but she resists the temptation to be overly hammy. And she’s likeable enough and amusing enough to keep us interested when the plot gets a bit creaky. Welch has always been underrated and this sort of comic action movie was the kind of thing she did very well indeed.

This was 1967 and the movie was clearly intended for the widest possible audience so there’s no sex, no nudity and no graphic violence. Today it would probably get a G rating without too much trouble. It’s also great fun. This is a lightweight unpretentious romp that succeeds admirably in what it sets out to do.
Posted by dfordoom at 16:19