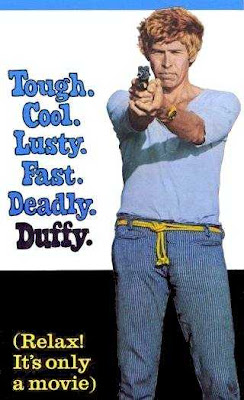 Duffy is one of those odd little late 1960s movies that tries to capture the spirit of its era, in all its tasteless excess and pop-psychology silliness. Duffy is more entertaining than most because it combines these elements with a highly entertaining heist story.

James Mason is shipping mogul J. C. Calvert. He has two sons, equally bereft of talent or of any desire to earn a living. Antony Calvert (John Alderton) is forced into what he sees as outrageous wage slavery in his father’s business empire. He contributes nothing of value to the company but it amuses J. C to force his feckless on to turn up to the office every day. The other son, Stefane (James Fox), is luckier. His mother’s will provided him with sufficient access to the family money to allow him to live a life of fashionable indolence. And to keep him well supplied with extraordinarily tacky 60s fashions.

Antony spends most of his time trying to come up with schemes (invariably unsuccessful) to rob his father’s business. When he overhears the old boy making plans to send a million pounds in hard currency across the Mediterranean by sea he believes he’s finally lucked out. He persuades Stefane and Stefane’s beautiful ditzy girlfriend Segolene (Susannah York) to join him in steali 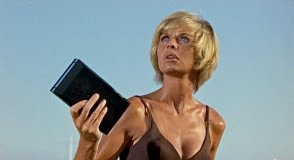 ng the money. To do this they need someone with hands-on experience of nautical matters. Stefane’s old friend Duffy (James Coburn) seems like the obvious choice.

Duffy is an ex-navy man who is now a kind of flower child drop-out. He lives in a groovy pad cluttered with bizarre artworks, and appears to spend most of his time chasing women.

They come up with the kind of over-complicated outrageously over-the-top plan that makes 1960s caper movies so much fun. Their scheme requires so much equipment that one can’t help thinking it would probably have c 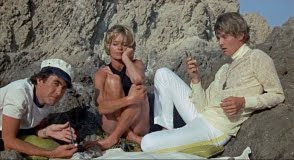 ost them most of their expected million pound profit. But Antony and Stefane don’t really care about the money. Antony just wants to get back at their father, and Stefane sees the adventure as a kind of performance art happening - the sort of thing that would amuse a bored spoilt rich kid.

While their planning progresses Segolene indulges herself in a game of musical beds. Stefane doesn’t mind if she shares Duffy’s bed because he’s into peace, love and sharing.

The heist itself is great fun, and of course there are various plot twists after the heist where we find that things were not quite what they seemed. There are double-crosses in abundance. 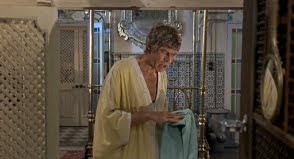 There’s plenty of amusing 60s dialogue, which becomes even more amusing when it’s delivered by James Coburn. There are more fashion disasters than you’ve ever seen in one place. It’s not every day you get to see James Coburn in a yellow kaftan. For which we can be truly thankful.

This is the first of the Columbia ma 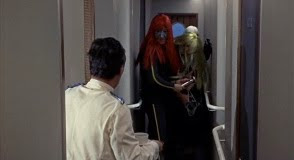 de-on-demand DVD-R releases that I’ve risked buying. I’d heard worrying reports that these discs won’t play in DVD recorders or in computer DVD drives. In fact this one played without any problems at all in both the internal and external DVD burners of my iMac, as did the one Warner Archive made-on-demand DVD-R that I’ve purchased so far. So perhaps the problems associated with this format have been exaggerated. The picture quality is excellent and the movie is presented in its correct aspect ratio (which also applies to the Warner Archive DVD-R release that I bought recently) so tentatively I’d have to say that these DVD-Rs are a lot more impressive than I’d expected.
Posted by dfordoom at 23:46