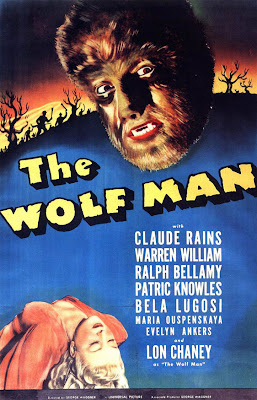 While Universal liked to claim the movie took its inspiration from European folklore the truth is that screenwriter Curt Siodmak made most of it up. In doing so he created the werewolf legend that was to become so familiar.

Larry Talbot (Lon Chaney Jr) is the second son of an English baronet, Sir John Talbot (Claude Rains). Being the second son he could not expect to inherit either the estate or the title and feeling that his father cared little for him he packed his bags and moved to the United States. As a result of the unexpected death of Sir John’s eldest son everything has changed. Larry has returned to the family seat, although perhaps more out of a vague sense of family duty than any great enthusiasm. Nonetheless when Sir John suggests they should forget the past he is prepared to do so and to try to accept his position as heir with good grace.

When he meets Gwen Conliffe (Evelyn Ankers) he starts to feel more enthusiastic about his prospects. He is immediatel 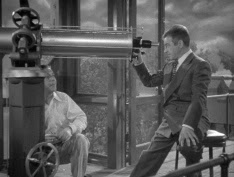 y attracted to her and, although she is engaged to Sir John’s head gamekeeper it’s clear that she fees at least some interest in him as well.

All is going well until fate steps in. He visits a gypsy camp, accompanied by Gwen and Gwen’s friend Jenny Williams. Jenny wants to have her fortune read. The gypsy Bela (Bela Lugosi) becomes very agitated when he looks at her palm and tells her to flee. Moments later Larry sees Jenny attacked by a wolf and goes to rescue her. In doing so he is bitten by the wolf. He kills the wolf but the only body that is found is the body of the gypsy Bela.

Bela was of course a werewolf, and now that is to be Larry’s destiny as well. There is no escape. 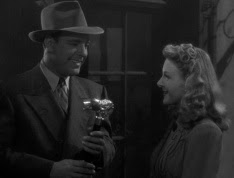 The story behind the movie is as interesting as the movie itself. Curt Siodmak’s original script had the Larry Talbot character as an American named Larry Gill who was no relation to Sir John Talbot. He has simply come to Britain to install a telescope. More importantly, this first version suggested that Larry may have simply believed he was a werewolf but left the question as to whether he really transformed into a wolf ambiguous. There are still traces of this early version in the final film. Sir John Talbot believes his son is suffering from a delusion brought on by shock, and that the werewolf is a metaphor for the dark side of the human personality, a metaphor that has become real in Larry’s mind.

While that version could ha 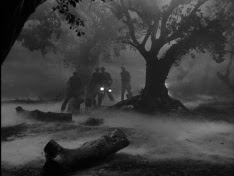 ve made an interesting film, and in fact that very idea is the basis for the superb Val Lewton-produced Cat People made at RKO the following year. Universal however made the correct decision to ask Siodmak to rewrite the script to make the werewolf real. That is after all what Universal’s audience would have expected. The Lewton films took a very different approach to horror, but both approaches are valid in their own way.

This is one of Lon Chaney Jr’s finest performances. He makes Larry Talbot a very sympathetic character indeed and this is the key to the movie’s great success. He is the most tragic of all the Universal monsters, a man who has done nothing whatever to des 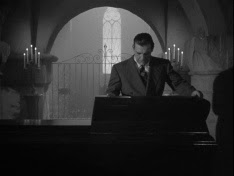 erve his fate. Chaney manages to convey this without resorting to cheap sentimentality.

Claude Rains is excellent as always, the only problem being that I don’t think anybody could possibly believe that Lon Chaney Jr could be his son. Two men more physically dissimilar would be difficult to imagine. Bela Lugosi is shamefully under-utilised but makes the most of his brief screen time.

George Waggner might not have been the world’s most inspired director but he’s competent enough and he certainly understands how to pace a horror film. 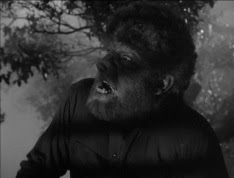 Valentine and art director Jack Otterson combine to make this a visually very satisfying movie. Otterson’s forest set, built on a sound stage, is superb. It look outrageously artificial, giving the movie the feel of a dark fairy tale or a story out of legend. Jack Pierce’s wolf man makeup is the one element that in the past has caused me to have a problem with this movie. It’s not really very wolf-like, but I’ve finally learnt to accept it and to enjoy the movie’s other very considerable strengths.

A movie that works wonderfully well as a horror film but with more emotional punch than most of Universal’s monster flicks.

The DVD from the Wolf Man Legacy set looks very good and includes a documentary and commentary track.
Posted by dfordoom at 13:56

My all time fave! I have nothing to add that you (and I) haven't already said. Just remember: love and life are fleeting; THE WOLF MAN is forever! :)

Vicar, I can't believe I used to dislike this film. Son of Dracula, the 1934 The Black Cat and The Mummy are still my favourite Universal horrors but if I see The Wolf Man again I may well find myself liking it even more. I rented the Wolf Man Legacy set but I'm seriously considering buying a copy now.