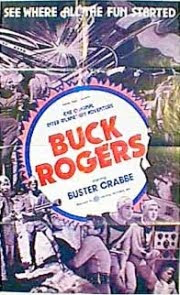 The 1939 Buck Rogers serial combines most of the clichés of the adventure serial, and it does so quite entertainingly.

Lieutenant Rogers (Buster Crabbe) is the pilot of a military dirigible that is forced down in a storm in a remote snow-covered mountainous location. Since there was no time to get off a last radio message the two surviving crew members, Rogers and the teenaged Buddy (Jackie Moran) are never found. Not at the time anyway. But luckily they had on board a canister of a new experimental gas that can put people into a state of suspended animation. So when they are finally found five hundred yeas later they are still alive.

Things have changed on Earth, but not for the better. Civilisation has paid the price for allowing racketeers to flourish. Now one such racketeer, the infamous Killer Kane, runs the entire planet. Well, almost the entire planet. One last outpost of law-abiding citizenry remains - the Hidden City. 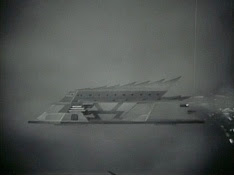 y pretty much the same as piloting a 1930s dirigible so he doesn’t need any extra training.

The Hidden City is by no means defenceless. Under the leadership of the Scientist-General Dr Huer they have built up their own fleet of spaceships and they have some nifty technology, like an invisibility ray. They’re still heavily outnumbered though so some allies would come in handy. Someone suggests that the inhabitants of Saturn would be ideal allies so Buck and Buddy are off to Saturn, accompanied by the beautiful Lieutenant Wilma Deering (Constance Moran). 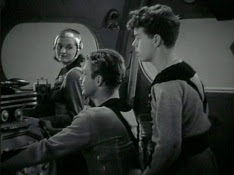 paceships to Saturn, hoping to persuade the Saturnians to ally with him instead. Luckily Buck and his companions have gained the loyalty of the brave Saturnian Prince Tallen.

Being a serial there are naturally endless obstacles to overcome and the fortunes of war swing back and forth.

It’s all great fun, although perhaps not as good as the Flash Gordon serials.

Killer Kane is not the most memorable of serial villains, and gangsters as the bad guys, even gangsters with ray guns and spaceships, don’t quite measure up to Ming the Merciless and his minions from the Flash Gordon serials. 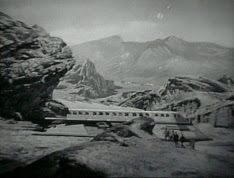 The most dreaded weapons in Killer Kane’s arsenal are his amnesia helmets which turn people into mindless robots. They have the advantage of being reasonably fearsome without requiring any additional special effects!

No-one in 1939 had any clear idea what an actual spaceship would look like. The spaceships in Buck Rogers look a bit like a combination of an aircraft and a very small ocean liner. They’re silly but kind of cool. The special effects in general are delightfully silly.

Buster Crabbe had been a famous athlete, winning a swimming gold medal at the 1 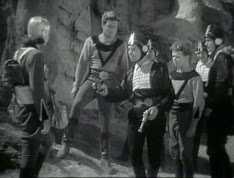 932 Olympic Games, so he looks the part of a hero. As an actor he’s not the greatest but he’s impossible not to like and he became the king of the serials. Constance Moran is quite good. In general the acting is what you want in a serial - it’s not great but everyone is very excited.

Anthony Warde is adequate as Killer Kane but the role really needed to be overplayed a bit more.

The twelve episodes are not in fantastic shape and haven’t been restored for DVD release but the picture quality is quite watchable. The slightly flickering quality resulting from minor print damage actually enhances the atmosphere.

This is good clean goofy fun.
Posted by dfordoom at 16:50