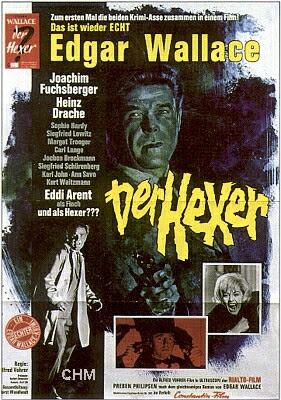 Der Hexer (The Magician or The Ringer) is one of the Edgar Wallace krimis made by Rialto Studios in Germany from the late 50s and right through the 60s. And it’s one of the best.

In a good krimi you expect a touch of the gothic, an ingenious and very intricate plot, some fairly decent comic relief, a hint of sleaze, plenty of action and a dash of weirdness. Der Hexer ticks all of those boxes. The only element missing is the usual obligatory night-club scene which was an excuse for a bit of mild sleaze (the producers of these pictures were under the rather charming impression that the English at that time spent much of their lives in strip joints in Soho). But it certainly has all the other ingredients and they’re combined rather nicely.

This one is based on The Ringer, one of Wallace’s 175 novels. It opens in fine style with the secretary to a London solicitor being murdered and her body being paced in a midget submarine! What the murderers don’t realise is that the secretary was the sister of Arthur Milton, the notorious criminal knows as The Ringer (although the subtitles always refer to him as The Magician). He was a criminal but his victims were other criminals and the implication is that he was a kind of vigilante/private crimefighter. He was deported to Australia (apparently the British were still transporting convicts to the penal colonies in Australia in the early 1960s

!) where he now lives in exile.

Inspector Bryan Edgar Higgins of Scotland Yard (Joachim Fuchsberger) is assigned to the case by his superior, referred to only as Sir John (most people in Britain of course have knighthoods). The Inspector’s name is a typical krimi in-joke since Edgar Wallace’s son Bryan Edgar Wallace wrote crime thrillers as well, many of which were made into krimis. Inspector Higgins lost his drive’s licence for speeding but luckily he has a beautiful blonde girlfriend named Elise to drive him around. Higgins also does some photographic work for the police although as we discover early on his photographic work seems mostly to involve taking nude photos of Sir John’s glamorous secretary

Higgins knows that The Magician will try to return to London for his sister’s funeral, so it should be easy to pick him up. It’s a good theory but The Magician is a master of disguise and he eludes the police.

What Higgins has stumbled into is a white slavery racket involving bogus clergymen and midget submarines. I love these Edgar Wallace krimis so much! The Magician is as keen as is Scotland Yard to bring these criminals to justice but his me

thods are likely to be rather more brutal and rather less legal than the Yard’s. The Magician has an ally. His beautiful blonde wife is now in England as well (the only women in this movie who aren’t glamorous blondes are the glamorous brunettes). An Australian named James Wesby (Heinz Drache) is snooping around as well and seems a likely candidate to turn out to be The Magician but with the characteristically convoluted plotting of these films the solution to the mystery is unlikely to be as simple as that.

oving and stylish movie. Eddi Arendt is on hand as always in the Rialto krimis to handle the comic relief duties which he does quite well. One of the strengths of these films is that the comic elements never become annoying and don’t interfere with the action. Herbert Reinecker’s screenplay is packed with red herrings and outrageous coincidences and I wouldn’t have it any other way.

Joachim Fuchsberger and Heinz Drache will be familiar faces to krimi fans. These movies were the mainstay of the German film industry in the 60s and they could call on the services of some very fine actors. The acting is always very good. Sophie Hardy as Elise is both competent and suitably glamorous (English

policemen at this time always had girlfriends who looked like lingerie models).

These movies were always set in England and filmed entirely in Germany and the film-makers’ knowledge of what England was really like was gleaned mostly from Edgar Wallace novels! The English police are always heavily armed and always willing to resort to gunplay. The entirely erroneous nature of their knowledge of England is one of the great joys of the krimis.

The German Tobis DVD includes both the English dubbed version and the original German soundtrack with English subtitles and as usual they’ve got their hands on a very nice widescreen print.
Posted by dfordoom at 00:08

Nice write-up and damn does this movie look great! I've been meaning to explore the krimi genre and this looks like the perfect place to start. Thanks for opening my eyes to this wonderfully looking flick.

The German's cockeyed view of England is definetly one of things that make these movies fun. It's like they take place in some alternate reality England.

Absolutely awesome - definitely one of the very best so far! Apart from a nightclub or dodgy bar, the only other thing missing was Klaus Kinski (maybe he was getting his ego massaged lol)

Doesn't make the blindest bit of sense, but who cares? Great to see both the regular Rialto leads, and also Siegfried Lowitz as the older Inspector all having a blast (it's a shame they didn't think to make the coppers they played the same character in each movie).

About four films later in the series, they did a direct sequel to this - not seen that yet.