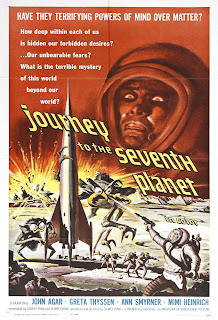 Released in 1962, it was one of three notable B-movies made in the early 60s by independent producer Sid Pink, the others being The Angry Red Planet and Reptilicus. They’re notable not for being great movies, but for being highly entertaining bad ones.
Journey to the Seventh Planet, like Reptilicus, was a US-Danish co-production which is why the cast features so many Scandinavian actors and the crew of the spaceship is a mixture of Americans and Scandinavians.

A UN space mission is sent to explore Uranus. When they arrive they are surprised (to say the least) to find the planet looks just like Denmark. And it seems to be inhabited by lots of beautiful Danish girls. It doesn’t take too long for our astronauts to figure out that some kind of intelligence has been probing their minds, and that the Danish scenery comes from their own minds, their own memories. 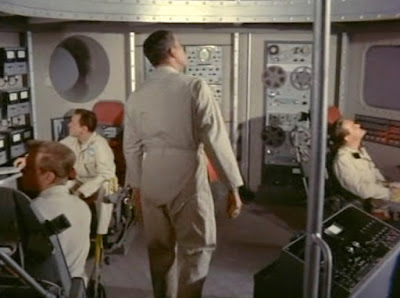 As well as recreating their fondest hopes (a planet that looks just like Denmark and is full of beautiful Danish girls) it can also recreate their deepest fears. If one of them is afraid of rats they will be menaced by giant monster rodents. And what is this strange intelligence’s objective in doing all his? You don’t win any prizes by guessing that it intends to invade the Earth.

The five astronauts are trapped in an enclosed world behind a force field, a force field so powerful that it can only be penetrated by walking straight through it. On the other side they find the monsters. Now they must save both themselves and the Earth.


The special effects, like the movie itself, are a mixture of good ideas and bad execution. The stop-motion monsters are pretty laughable. No matter how bad the social effects might be they’re delightfully goofy and campy. The sets betray the very limited budget Pink had to work with but in general they don’t look too bad by the standards of 50s B-movies.

The acting can best be described as atrocious, apart from John Agar (who had started his career in A-movies and worked his way down) who is reasonably good. 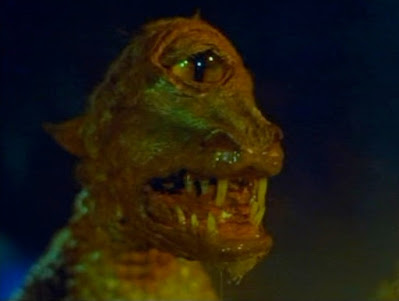 The main problem from which this movie suffers is that it doesn’t make the best use of its most interesting ideas. We would be more affected by seeing the astronaut’s hopes and fears turned into realities if we knew a little bit more about them, and if we knew why these hopes and fears were so important to these individuals. There is one tantalising hint, when the crew commander admits that he’s never been in love. That could make the appearance of a girl he’s once been fond of rather poignant and could have given the movie a solid dramatic punch, but the idea is just thrown in randomly and then forgotten. Ib Melchior’s screenplay (from a story by Sid Pink) must take some of the blame for this.

There is the usual use of stock footage for the rocket launches and animation is used (not outstandingly well) for the shots of the spacecraft in space. 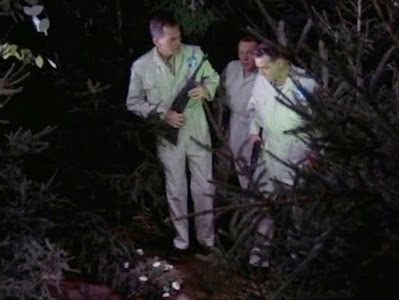 Despite all these flaws Journey to the Seventh Planet is great entertainment in the way that only 1950s B-movies can be. Don’t expect too much and you’ll have a lot of fun with this one. Recommended.

I caught this movie on cable TV a while back but it is available on DVD. The print I saw was unfortunately fullframe and had been cut but apart from that it was unexpectedly good.
Posted by dfordoom at 23:34