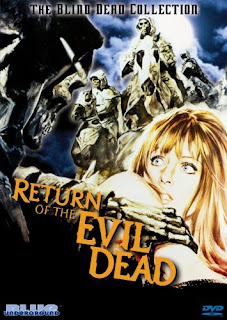 The Return of the Evil Dead was the first of three sequels to Spanish director Amando de Ossorio’s very successful 1971 Tombs of the Blind Dead. Together these four movies make up his celebrated Blind Dead series, widely regarded as among the classics of Spanish horror movie-making.

The Return of the Evil Dead (the Spanish title is El Ataque de los Muertos Sin Ojos which literally means The Attack of the Blind Dead), made in 1973, functions perfectly well as a standalone film. It explains the origins of the Blind Dead, although from memory their origin is explained differently in the first film.

In the town of Bouzano in Portugal during the Middle Ages (presumably the early fourteenth century) the townspeople have grown tired of the excesses and wickedness of the Knights Templar. They sack the order’s abbey and burn the knights. When one of the knights vows that they will return from the dead to raze the town the villagers decide to blind the knights first so that even if they fulfil their threat they will be unable to find the town. They then burn the knights. 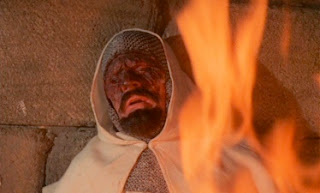 We then move forward to the present day. Each year the town celebrates a festival in remembrance of their victory over the Templars. The legend that one year the knights will return has by his time been consigned to folklore. Nobody believes such stories any more.

Nobody except the hunchbacked village idiot, Murdo. Murdo has his own reasons for hating the people of Bouzano, having been ceaselessly mocked by all and sundry. He decides the bring back the Templars by performing a human sacrifice, an operation that proves all too successful (and an operation that the movie suggests was used by the Templars themselves in order to gain a kind of immortality). Pretty soon the blind dead Templars are slaughtering the good folk of Bouzano. Only one man seems inclined to put up a fight against them - Jack Marlowe (Tony Kendall), an outsider who is organising the fireworks display for the festival. 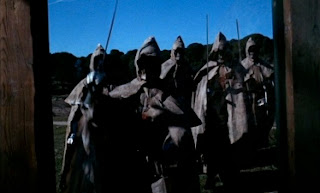 The mistress of the corrupt mayor of the town happens to be an old flame of Marlowe’s, a circumstance which earns Marlowe a beating. Such matters are soon put on hold however as news starts to filter in from the countryside about rampaging dead knights riding dead horses. The movie then follows a familiar horror movie pattern, with a small group of survivors hiding out in the village church. They turn out to be as much of a threat to each as the Templars are.

The basic plot is hardly anything startlingly original but what makes the Blind Dead series so exceptional is the Templars themselves. The makeup effects are gruesome and genuinely horrifying. It’s the idea itself that is de Ossorio’s masterstroke. The dead blind knights are among the most original and effective of horror movie monsters. They are not exactly zombies, and not exactly ghosts or revenants. 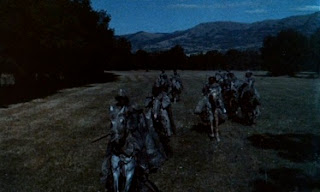 Amando de Ossorio (who wrote the screenplay as well as directing) has based his idea to a large extent on the evil reputation of the Templars themselves. Interestingly enough they are not actually referred to as Templars but as knights from the east. The Templars were one of many medieval orders of warrior monks and their eastern origin may indicate that they were based not just on the Templars but also on other military orders such as the Teutonic Knights, who had a fairly bloodthirsty reputation as well. But it is the legend of the Templars’ gradual drift into heresy and sorcery that forms the core of de Ossorio’s idea. The Templars were in fact suppressed by the Pope in 1312 and many of the knights did in fact end their days being burned at the stake or meeting similar grisly fates.

The use of slow motion photography whenever the dead knights are on the move, especially on horseback, is a simple technique that works remarkably well. The director creates an extraordinary mood of implacable and mindless malevolence. The knights are capable of executing effective military tactics, so they are perhaps not entirely mindless so much as entirely and terrifyingly single-minded and obsessed. They are certainly more than mere zombies and this makes these movies vastly superior to the average zombie movie, both in terms of horror and in terms of atmosphere. 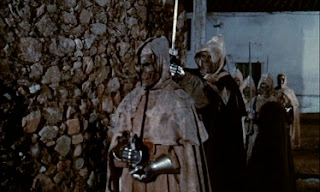 Blue Underground have done a fine job with their DVD release and have included both the sub-titled Spanish version and the English dubbed version. I watched the sub-titled version so I can’t say if there are any differences between the two versions.

The one major weakness of this movie is the excessive use of gore. This is unfortunate since the movie has more than enough atmosphere to make the gore unnecessary and it actually has the effect of deadening the senses and lessening the horror. But in a 1973 European horror movie gore had become a commercial necessity, and despite this minor criticism The Return of the Evil Dead is a well-paced and very effective piece of horror film-making and is highly recommended.
Posted by dfordoom at 11:57

This is funny,because I just finished watching this! I watched the dubbed version.In the film we see about 4 or 5 Templars burned,when they rise there are about 20,hmmm People forget how to run or actually defend themselves against the slow moving monsters,too many things had me rolling my eyes.Disappointing,since the first one is great.I have the coffin box set and hope the next two films are better,pity

I just watched it and was disappointed,first one was great,have yet to watch the other two

I love all the Blind Dead movies, but I do feel that they took a nosedive immediately after the first one. They're all great, but the first one is the only one that I feel really holds up to other films from the era.