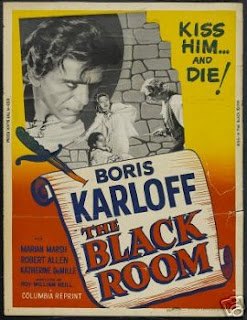 The Black Room is a very good 1935 Boris Karloff gothic horror vehicle from Columbia, which happily is now available in the Boris Karloff: Icons of Horror DVD boxed set.

The movie opens in the mid-18th century, in 1760 to be exact. Baron de Berghman’s wife has just given birth to an heir. You’d expect the baron to be delighted but in fact he’s horrified. He’s horrified because it’s not one heir but two - twins. And he knows the ancient prophecy (and what’s a gothic horror movie without an ancient prophecy) that the family will end the way it began. It began with twins, with the younger twin murdering the elder, and according to the prophecy that’s how the family will end.

And the murder will take place, like the original murder, in the Black Room of the family castle.

The baron thinks he has found a way to evade the prophecy - he has had the Black Room bricked up. But we all know that no matter how hard you try to evade an ancient prophecy it will never do you any good.

Many years later the twins will meet again.


Gregor (Boris Karloff) is the elder twin and has inherited the family title. He has now sent for his younger sibling Anton (also played by Boris Karloff). Gregor is an unpopular lord; within minutes of his arrival Anton finds himself the victim of an attempted assassination, an assassination aimed at his brother Gregor.

Gregor is cruel and debauched. The peasants hate him and there have been countless plots against his life. Many of the village women have gone to the de Berghman castle, never to be seen again. Anton, who has a withered right arm, is by contrast kindly and civilised. He believes his brother has sent for him because he is lonely, but as we will soon see Gregor has another agenda. 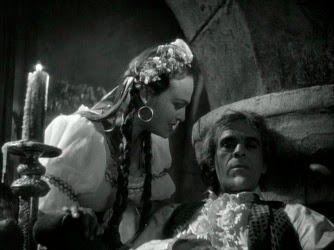 Gregor has found a foolproof scheme both to escape the prophecy and to avoid the consequences of his wickedness. His problem is that he also has to get around Colonel Hassel, who still remembers his father. And Gregor also has plans to marry Colonel Hassel’s beautiful daughter who is in love with a handsome young lieutenant. Can Anton prevent his brother from doing further evil, and can he save himself from his brother’s unreasoning hatred?

Of course there will be a great deal of further wickedness and we will see that prophecies often take very unexpected forms. And we will discover the secret of the Black Room. 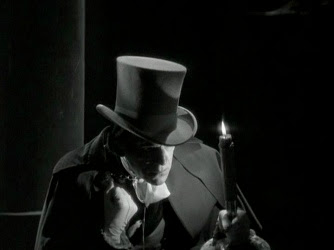 Karloff is excellent in his dual roles, being charming and sensitive as Anton and degenerate and sadistic as Gregor. Marian Marsh is good as Colonel Hassel’s daughter and Thurston Hall gives a fine performance as Colonel Hassel, but with Karloff in this sort of form he dominates the movie completely.

Roy William Neill was always a very capable director and he was always comfortable with hints of the gothic (as in several of the Universal Sherlock Holmes movies he directed). This movie is fully-fledged gothic and he does an excellent job, as does cinematographer Allen G. Siegler. Columbia weren’t known for gothic horror but this movie manages the gothic atmosphere admirably. 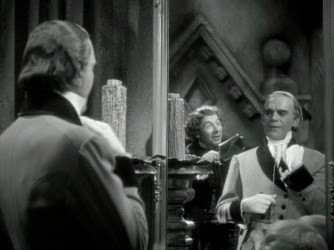 Columbia have done a fine job with the DVD presentation of this movie. Both picture quality and sound quality are more than acceptable. The DVD boxed set includes four Boris Karloff horror movies including several that have hitherto been difficult to get hold of.

With Karloff in dynamic form and with all the gothic trappings you could wish for - secret passageways, dungeons, prophecies, good and evil twins, murder, a young man’s life hanging in the balance, a beautiful heroine betrothed to an evil nobleman, mysterious disappearances and general wickedness, this movie ticks all the gothic horror boxes. Highly recommended.
Posted by dfordoom at 11:45

The Black Room is a great little film that was really well-done. Karloff in his prime. He could play both extremes of good and evil so easily. Vincent Price was also great in that regard. I wish director Neill had done more in the horror vein. Scarlet Claw is probably my favorite of the Rathbone/Bruce films. I just caught an earlier film from Neill called Black Moon (1934) with Fay Wray. Really good little voodoo film. Available on-demand from Sony.