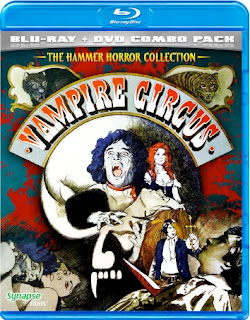 Vampire Circus was one of Hammer’s best 1970s productions. This was partly because they’d brought in a lot of new blood - producer Wilbur Stark, screenwriter Judson Kinberg and director Robert Young. The result was a gothic horror movie that felt fresh and original.

Combining circuses with horror always works well and this movie handles the combination particularly well. The circus us more than just a colourful background setting - the Circus of Nights is the cause of the horror.

It starts with what seems like a very traditional Hammer opening sequence. Led by the Burgomeister, villagers with flaming torches descend upon the castle of the evil Count Mitterhaus, who has been seducing and murdering the village girls. The castle is razed and the wicked count is staked. Before he dies the count threatens not just the destruction of the village but also all its children.

Sixteen years later his threat seems to be coming true, although not in quite the way you’d expect of a vampire movie. The village is being decimated by a horrific plague. The surrounding villagers have put a cordon around the village and threaten to shoot anyone who tries to leave. The village doctor believes this is purely a medical problem and forms a plan to escape and reach the capital so he can bring back medicines to cure the plague.

With the village under quarantine the last thing you’d expect would be for the circus to come to town, but that’s what happens. The Circus of Nights is led by a gypsy woman (Adrienne Corri). In fact she’s someone the townspeople should recognise but don’t. 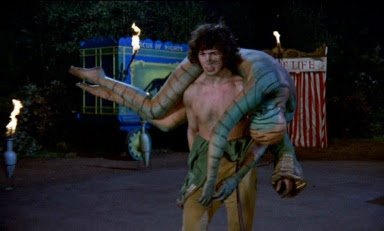 What the villagers don’t know is that the circus is composed mostly of vampires and their plan is not just to carry out Count Mitterhaus’s threat, but also to resurrect the count. They will start by killing the children of the men who led the attack on the count’s castle. There isn’t really much more to the plot than that but it’s more than sufficient for a gothic horror film. The focus is on atmosphere and on the characters of the men who had destroyed the vampire count.

Apart from Thorley Walters who plays the Burgomeister (and plays the part very well as usual) the actors are mostly fairly new to Hammer, although Anthony Corlan who plays the mysterious animal tamer Emil had appeared previously in Taste the Blood of Dracula. He’s particularly impressive. Also impressive is Lalla Ward (later to be better known as Romana II in Doctor Who) as a vampiric acrobat. 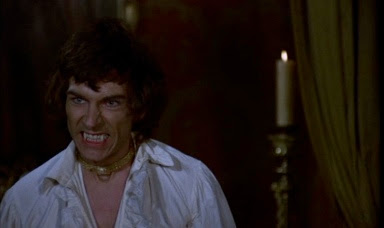 The circus scenes are the highlight of the movie and feature some quite impressive visual effects with acrobats transforming into bats and panthers transforming into beautiful women. There’s also a memorable routine with an almost naked panther woman. And of course there’s an evil clown.

There’s more nudity than was usual in Hammer films and there’s a general air of depravity and perversity that is more reminiscent of European horror than of Hammer’s usual offerings. 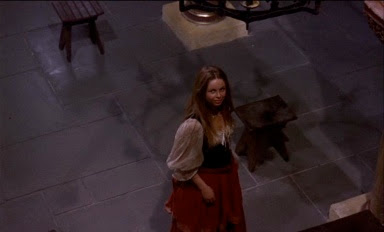 The Synapse combo set includes both DVD and Blu-Ray discs. Both transfers are excellent but the DVD is so good that the Blu-Ray transfer is more or less superfluous. Also included is an excellent and fairly lengthy (and very informative) documentary on the making of the film.

Vampire Circus proves that Hammer could still make the grade in the early 70s. This is a gothic horror classic and is highly recommended.
Posted by dfordoom at 16:55