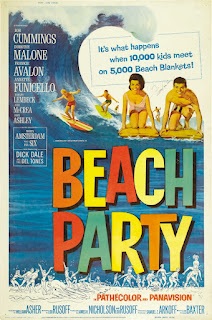 Cult movies means more than just low-budget horror, sci-fi and juvenile delinquent movies.  It also means beach party movies, and the daddy of them all is AIP’s 1963 Beach Party. It wasn’t the first beach party movie, but it’s the one that really got the genre rolling. It was also the first teaming of the fabulous Annette Funicello and Frankie Avalon.

To keep an audience interested this type of movie needs more than just surf and bikinis. And Beach Party does have an actual plot. It’s a very silly plot, but this is not Citizen Kane and the plot is more than adequate for the job.

Frankie (Frankie Avalon ) and Dolores (Annette Funicello) are on their summer vacation and they’ve rented a beach house. Frankie says it will be very cozy with just the two of them there. Sort of like being married. Dolores is worried that it may be just a little bit too much like being married. So she takes steps to preserve her virtue - unbeknownst to Frankie she has invited a dozen of their friends to stay. Any girl’s virtue should be safe with that many people around.

What none of the surfers realise yet is that they are being watched. In fact they are being studied. Professor Sutwell (Robert Cummings) is an anthropologist who has studied primitive societies everywhere from the South Seas to the Amazon jungles, with a special emphasis on courtship and mating rites. Now he is turning his attention to the mating habits of an even more exotic and primitive society - teenage American surfers! He has a camera with a telephoto lens and a long-range directional microphone set up and he’s busily making notes.

Of course to really understand a primitive society it is necessary at some point to make contact with some of the natives. His first contact is with Dolores, and it has unexpected consequences. Dolores has decided to pay Frankie back with some of his own medicine and she’s looking for a man to canoodle with to make her surfer boy jealous, and she decides that Professor Sutwell would be just perfect. The professor might be a distinguished anthropologist but he’s a bit of a novice when it comes to actually putting mating rites into practice and he’s soon smitten with young Dolores. This romance between the 53-year-old Cummings and the 20-year-old Funicello would certainly raise eyebrows today but it’s all in good fun and we know right from the start that Frankie and Dolores are destined to be together, and that Professor Sutwell will undoubtedly end up with his glamorous but much more suitable thirty-something assistant Marianne (Dorothy Malone).

The movie also has its villains, in the person of Eric von Zipper (Harvey Lembeck) and his motorcycle gang. They are known as the Ratz, and their girlfriends rather inevitably are known as the Mice. But this is strictly a fun movie and the bumbling von Zipper isn’t much of a real threat to anybody. He’s certainly no match for Professor Sutwell, who has picked up a few tricks on his travels, such as a martial arts technique that allows him to send anybody into suspended animation with the touch of a finger. The climactic fight scene involves nothing more lethal than custard pies.

Now it has to be admitted that Frankie Avalon and Annette Funicello were not the greatest actors who ever graced the silver screen but they’re likeable and they’re ideally cast and their performances work perfectly for the sort of movie this is. Robert Cummings is called on to provide much of the movie’s humour, which he does admirably.

The songs (of which there are quite a few) are of mixed quality but Dick Dale and the Del Tones are on hand to provide a few boppy surf classics.

MGM has released this movie as part of its Midnite Movies range. It’s barebones but it’s presented in an excellent 16x9 enhanced transfer that makes the most of the 2.35:1 aspect ratio. The colours are rich and vibrant which is of course absolutely essential for such a movie to work on DVD.

This is silly goofy fun with a great deal of charm. It’s romantic and it’s genuinely funny and it’s simply impossible to dislike. And Yes, AIP’s biggest star, Vincent Price, does make an appearance!
Posted by dfordoom at 10:02