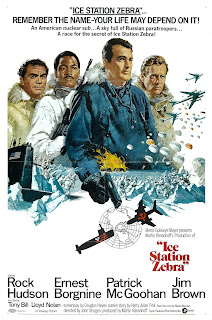 After the spectacular success of The Guns of Navarone in 1961 it was safe to assume that more movies based on Alistair MacLean’s action-adventure novels would follow. And they did. None of them managed to achieve the same success, but Ice Station Zebra in 1968 tries hard.

A radio message has been received from a British civilian weather station in the Arctic, Drift Ice Station Zebra. The message is garbled but apparently there has been a fire or an explosion, or both. Either way the men of Ice Station Zebra are in big trouble. And there is a huge storm in the area, making it impossible for aircraft to reach the station to rescue the men. So the American nuclear submarine USS Tigerfish is dispatched from Scotland to rescue them.

To the surprise of the submarine’s captain, Commander James Ferraday (Rock Hudson), he is to have a passenger aboard for this rescue mission. The passenger is a British civilian, a Mr Jones (Patrick McGoohan). The admiral who gives Ferraday his orders cannot give him any further information, other than the fact that there is something at stake here beyond a mission of mercy.

It seems safe to say that Mr Jones is a representative of some sort of British intelligence agency and that his name is not Mr Jones. Ferraday’s orders are that he is to do anything that Mr Jones asks him to do as long as it does not endanger the submarine or the crew. The wording of those orders will cause problems for both Ferraday and Mr Jones. Also included as passengers are a platoon of Marines. You don’t send Marines if the operation is a straightforward rescue mission.

Even more surprisingly, once the submarine is at sea Ferraday receives orders to pick up two more passengers. Boris Vaslov (Ernest Borgnine) is a Russian, but Ferrady is assured that he’s on the side of the free world. Mr Jones vouches for him. The other new passenger is a tough hardbitten Marine captain by the name of Anders (Jim Brown). Mr Jones is suspicious of Anders. Anders is suspicious of Jones and Vaslov. And Commander Ferraday is suspicious of all three.

Before they can carry out their somewhat mysterious mission they have to reach Ice Station Zebra, which entails a hazardous voyage beneath the Arctic ice, a voyage that will prove to have more dangers than Arctic ice. As you’d expect, the mission is not as straightforward as anybody expects. Even Mr Jones is taken by surprise by some of the plot turns.

The main problem with this movie is that it is too big. Too big in every department. It was filmed in Cinerama and on a big budget, with a big star, and with expensive special effects. And a very long running time of 148 minutes. Everything is on too big a scale, leading the audience to expect a very big movie. You’re led to anticipate more thrills and more action than the movie can deliver. This is not really an action-adventure movie in the sense that the term is generally understood, especially by modern audiences. Or even audiences of the 1960s - if they were expecting the non-stop thrills and action of a Bond movie they weren’t going to get them.

What we in fact have here is a modest spy thriller, a movie that relies on traditional spy movie-style suspense rather than large-scale spectacular action set-pieces. That’s not to say that it’s by any means a bad movie. It’s simply that it probably wasn’t worth spending quite so much money on. Director John Sturges made many movies in this and similar genres and he handles this assignment quite competently. His biggest problem is trying to keep the audience’s interest through 148 rather long minutes, and it’s a problem he is unable to solve with complete success.

Rock Hudson gives a low-key but reasonably convincing performance, although at the end of the film we don’t really know much more about what makes Commander Ferraday tick than we knew at the beginning. That’s more a fault of the script than of Hudson’s acting. The character is somewhat underwritten. Ernest Borgnine is much too hammy, and Jim Brown’s character is simply a stereotyped hardbitten Marine officer. Patrick McGoohan has the only really interesting role and luckily he makes the most of it.

The special effects are extremely variable, at times embarrassingly inept (especially the opening scenes of the satellite), at other times exceptionally good and very convincing. The first half of the movie, the voyage to the Arctic, is much stronger than the second half. Once they reach Ice Station Zebra they discover that there really isn’t quite enough plot to justify  so much effort.

The Region 4 DVD presents this movie in a beautiful 16x9 enhanced transfer which looks glorious.

Ice Station Zebra is, despite its flaws, an enjoyable enough movie. If you accept it as more of a low-key espionage drama than a straight-our action movie you should find it entertaining.
Posted by dfordoom at 09:05

Don't forget: for whatever (narcotics-enabled) reason, Howard Hughes had his own print of this film and watched it about 150 times!
That said, I like to think of this as the missing link between Secret Agent (a.k.a. Danger Man) and The Prisoner--that McGoohan's character has become so disenchanted with the spy game--b/c of the events of ISZ--that he resigns from MI6. But that's me filling in the blanks...
Thanks,
Ivan

I rather enjoy this film everytime TCM shows it. I love the music, and the premise. I think Tony Bill, Patrick McGoohan, Jim Brown, Rock Hudson all do a great job. But the movie drags so many times -- under the ice trying to find a place to surface, the race through the blizzard to the encampment, the fall into the ice fissure and rescue, and when they get to the base, what do they do? They stand there for 5 seconds before they take turns rushing toward to quonset huts one at a time. I have to blame that on the director who really needed to sit down with the editor to make this film more interesting.

Alister McLean's novel's got some significant differences, too, and makes a good read.