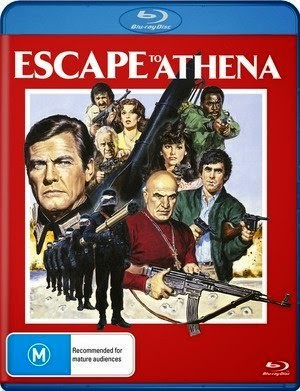 Escape to Athena is an action adventure comedy. Some viewers might feel it leans too heavily in the direction of comedy but to compensate for this it has enough good ideas to carry off the action adventure elements.

Producers David Niven Jr and Jack Wiener assembled a notable cast for this production and they had plenty of money to play with. Director George P. Cosmatos came up with the original idea which was licked into shape by screenwriter Edward Anhalt.

The setting is a German prisoner-of-war camp on one of the Greek islands in 1944. This is a prisoner-of-war camp with a difference. Its purpose is to loot the island of its archaeological treasures. The loot is supposed to be sent to Berlin but the camp’s commandant, Major Otto Hecht (Roger Moore), makes sure that the choice items find their way to his sister in Switzerland. Before the war Hecht had been a crooked dealer in antiquities and he is fleecing his political masters in Berlin the same way he fleeced his pre-war customers.

Hecht is a thief but in other respects he’s a decent enough fellow. He has no interest in ideology and since he’s using the prisoners to dig up the archaeological treasures he treats them quite well. Hecht is patriotic enough as long as it doesn’t interfere with his plans to enrich himself. His lack of nazi fervour puts him at odds with the island’s SS commander, Major Volkmann (Anthony Valentine). Volkmann is efficient but brutal and he indulges his taste for cruelty rather freely. 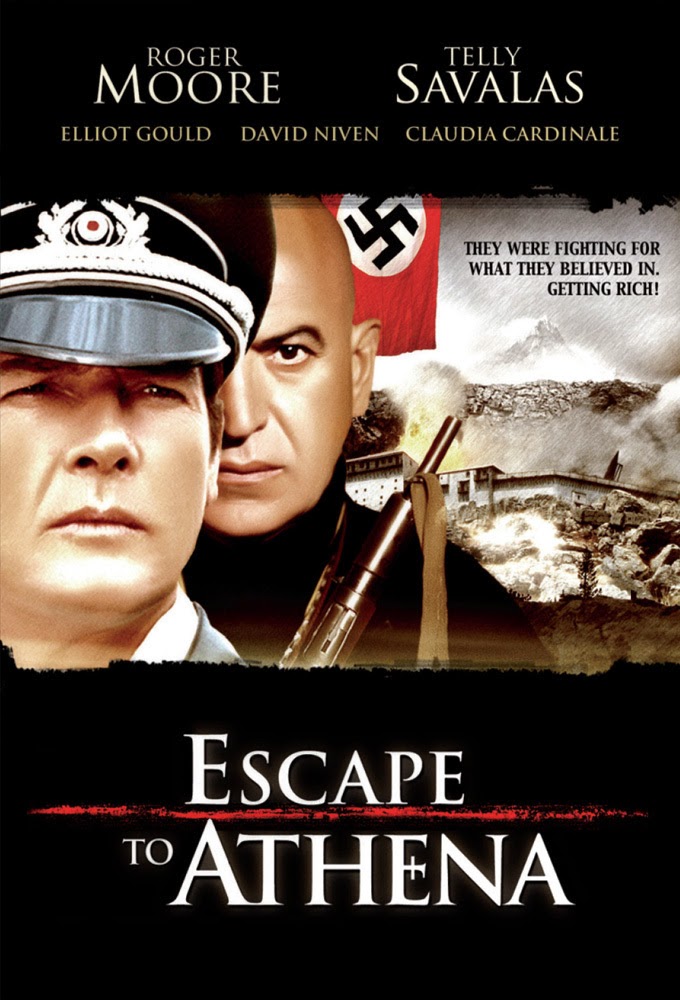 Hecht has assembled the sorts of prisoners best suited for his purposes including archaeologist Professor Blake (David Niven).

The latest batch of prisoners comprises two American entertainers shot down on their way to a USO concert. Dottie del Mar (Stefanie Powers) happens to be a champion swimmer as well as a singer and dancer and her swimming abilities are likely to be useful to Hecht in obtaining sunken treasures. Charlie Dane (Elliott Gould) is a standup comic who is unlikely to be of any use but Hecht is oddly fond of him, partly because they share a passion for American jazz.

The Greek Resistance is active on the island. Their leader is a defrocked monk named Zeno (Telly Savalas). Zeno’s girlfriend Eleana (Claudia Cardinale) runs the local brothel which is in reality the centre of the Resistance’s intelligence-gathering on the island. With an allied invasion in the offing Zeno has orders to take control of the island in order to destroy its U-boat refuelling depot and certain other much more top-secret installations. The island is also a missile base and its V2 missiles pose a major threat to an allied invasion fleet. Which is complete nonsense militarily, but this is only a movie after all and the missile base does add a very cool touch.

To take over the island Zeno will need the assistance of the prisoners. He gains their co-operation by promising to allow them to loot the island’s cliff-top monastery of its Byzantine treasures. This aspect of the operation appeals particularly strongly to Charlie Dane, and also to the camp’s Italian cook Bruno Rotelli (Sonny Bono) and to Nat Judson (Richard Rowntree), an ex-circus performer whose acrobatic talents promise to be useful. The potential difficulty is that the plans of the Resistance will also require the assistance of Major Otto Hecht. Hecht dislikes the idea of treason but he’s amenable to persuasion. 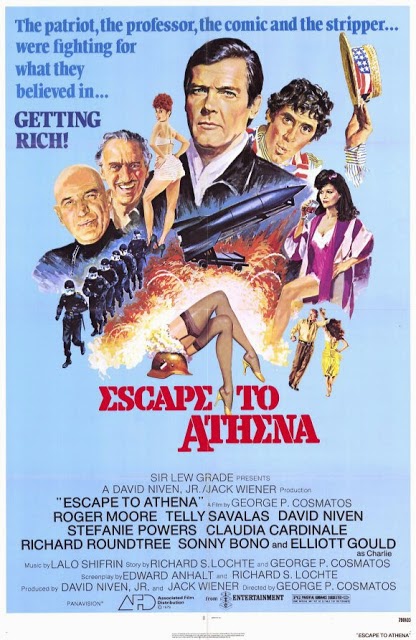 There are some impressive action scenes and some very impressive sets including the monastery which was built specifically for the film. There are enough explosions and gun battles to keep action fans happy. There’s also an exciting motorcycle chase through the narrow streets of the nearby village.

The aspect of the movie that is most problematical is the comedy which threatens to take over completely. Elliott Gould and Stefanie Powers often seem to be involved in an entirely separate movie from the one that Telly Savalas, Roger Moore, Anthony Valentine and David Niven are making. Whether this is a problem for you depends on how much tolerance you have for Powers and Gould’s very over-the-top comic mugging.

Casting Roger Moore as the commandant was certainly bold. He may have been somewhat miscast but Hecht is basically a sympathetic character and he carries it off reasonably well. Personally I’d have liked to see him given more to do, and I’d have liked to see Anthony Valentine given a lot more to do. Telly Savalas dominates the movie, as he usually tended to do. Savalas plays things fairly straight, albeit with a hint of tongue-in-cheek humour.

The movie was shot entirely on location on the island of Rhodes.

The Australian Blu-Ray release offers an excellent transfer and contemporary interviews with the cast and crew.

Escape to Athena could have been a fun adventure romp but the comedic elements are jarring and become irritating. It’s ultimately a misfire although it has its moments. Worth a rental.