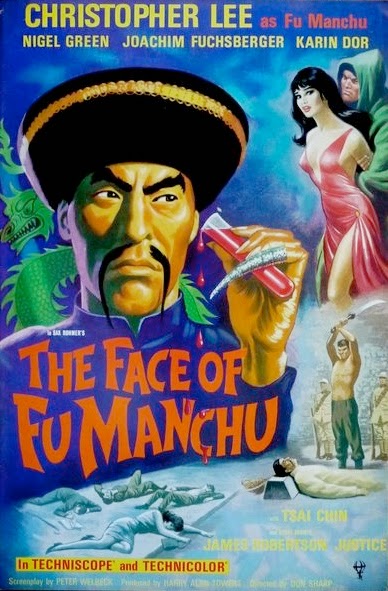 Considering the immense popularity of Sax Rohmer’s Fu Manchu novels it’s a bit surprising that the character made so few appearances on the screen after the very successful 1940 Republic serial Drums of Fu Manchu. There was an unsuccessful TV series during the mid-50s and that was pretty much it. That is until producer Harry Alan Towers got hold of the rights in the 1960s and saw the potential in relaunching the Devil Doctor on his career of crime and attempted world domination.

The result was The Face of Fu Manchu, released in 1965. Towers was known mostly as a low-budget producer but for this production he obtained German financing and enough of it to give the film reasonably high production values.

Towers wrote the screenplay himself and it provides all the plot elements required for such a movie. It has a diabolical conspiracy by Fu Manchu involving mass murder and world political control and it has the right plot twists. Most crucially it captures the feel of Sax Rohmer’s books pretty effectively.

Dr Fu Manchu (Christopher Lee) has been trying to discover the secret of a rare poppy grown only in Tibet, a poppy that can produce a poison of unimaginable horror. He intends to use this as a threat to gain political power. He does however lack one essential piece of information, known only to the High Lama. A British expedition to Tibet some years earlier had discovered this secret and the information is contained in the papers from the expedition, now under lock and key in a museum in London.

Naturally Fu Manchu has kidnapped a scientist, Professor Muller (Wolf Rilla), who will be forced to assist him. And naturally Fu Manchu will also kidnap the professor’s daughter Maria (Karin Dor) and threaten her with all kinds of torture in order to persuade her father to cooperate.

To convince the British government of the seriousness of his threats Fu Manchu plans to wipe out an entire town in Essex, an event portrayed with surprising (and effective) grimness.

Towers managed here to assemble the perfect cast for a Fu Manchu movie. Without taking anything away from Henry Brandon’s fine performance in Drums of Fu Manchu or Boris Karloff’s deliriously over-the-top interpretation of the role in MGM’s wonderful 1932 The Mask of Fu Manchu there’s no question that Christopher Lee would turn out to be the finest of all screen Fu Manchus. Lee’s performance works because he takes the character seriously (which was always Lee’s instinctive approach to any role). He gives Dr Fu Manchu some real substance and more importantly he imparts some genuine menace to the role.

Nigel Green was by far the best Nayland Smith. He makes Nayland Smith actually seem like the sort of man who would present a real threat to Fu Manchu. There’s nothing bumbling about Green’s Nayland Smith. He’s a bit pompous but he has the steely determination that the character has in the books.

Howard-Marion Crawford is (as always) a delight as Dr Petrie. And Tsai Chin is just right as the daughter of Fu Manchu - sexy and glamorous and evil with a dash of sadism. Her obvious joy at the prospect of flogging one of her women is a definite highlight of the movie, adding the touch of perversity that it needs.

The movie also benefits from a fine German supporting cast. Joachim Fuchsberger was a veteran performer in the wildly popular German Edgar Wallace krimis of the 60s like Zimmer 13 and Der Hexer and he knows how to provide the kind of acting this type of movie needs. He can do the action hero stuff and he plays his role fairly straight but with just a suggestion of tongue-in-cheek playfulness. Karin Dor had made several krimis as well and she makes an admirable heroine. Wolf Rilla was another veteran of both krimis and the wonderful early 60s Dr Mabuse movies (such as The Invisible Dr Mabuse).

The movie benefits also from having Don Sharp as director. Sharp had directed a couple of movies for Hammer (including The Devil-Ship Pirates) and had demonstrated his ability to handle both gothic horror and action adventure films. He was the perfect choice for this movie and he keeps the pacing pleasingly brisk.

The sets are quite effective. Fu Manchu’s secret hideout beneath the Thames was clearly inspired by Sax Rohmer’s The Trail of Fu Manchu and it adds something of a gothic touch. The water chamber linked to the Thames is a nice perverse touch. The decision to set the movie in the 1920s rather than the 1960s was a very wise one and the period look is achieved quite successfully.

The Face of Fu Manchu was followed by four sequels, although with increasingly limited budgets.

The Face of Fu Manchu is enormous fun and it’s at least reasonably faithful to the spirit of Rohmer’s novels. Fans of old-fashioned action adventure thrillers with a dash of outrageousness should get plenty of enjoyment out of this one. The performances of Christopher Lee and Nigel Green are major bonuses. Highly recommended.
Posted by dfordoom at 00:19

A very entertaining movie. I wish Nigel Green had stayed with the series. He made a fine Nayland Smith. I agree that Lee is the best Fu Manchu. Fu Manchu may be evil but Lee gives him a certain dignity that works well.