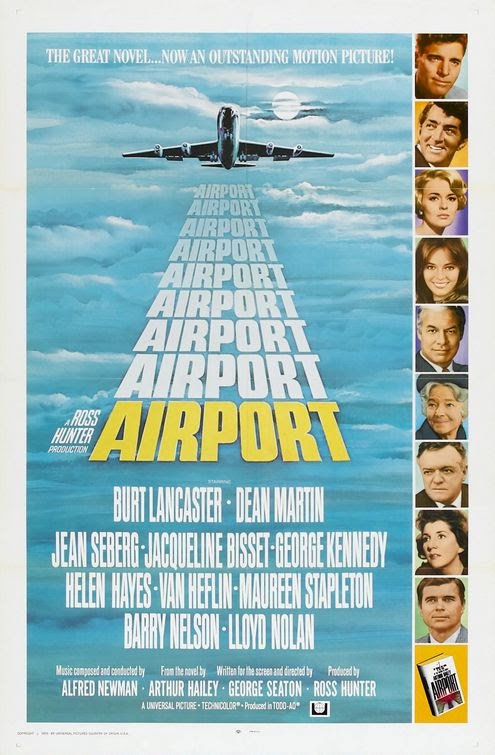 Airport was one of Universal’s biggest ever hits and it certainly played a role in setting off the disaster movie craze of the 70s. Airport though differs from the classic 1970s disaster movies (such as the sequels Airport 1975, Airport '77 and The Concorde...Airport '79) in several important respects which we’ll get to later.

The blockbuster movie (and it does have some claims to being the first bona fide blockbuster of the 70s) was based on Arthur Hailey’s blockbuster novel. The novel is pure melodrama (with definite soap opera tendencies) and it was just the sort of material that would appeal to producer Ross Hunter. The movie follows the same formula as the book, mixing melodrama with a thrilling story of terror in the skies.

Mel Bakersfeld (Burt Lancaster) is the general manager of Chicago’s Lincoln International Airport and he’s having a bad day. That’s nothing unusual. Bakersfeld has to keep the airport’s budget under control, keep the airlines happy, keep the passengers happy and he has to keep the politicians happy as well. That last bit is the biggest nightmare, especially with constant complaints about airport noise from nearby residents. The only chance of keeping the noise within vaguely acceptable limits is by having as many flights as possible take off from the airport’s main runway. And now Chicago has been hit by its worst snow storm for years and a Trans Global Airlines Boeing 707 has managed to get itself hopelessly bogged right slap bang in the middle of that vital main runway, thus closing the runway. That’s quite enough to wreck Mel Bakersfeld’s day but before the night is out the lives of over a hundred passengers will depend on Bakersfeld’s ability to do the impossible and get the blocked runway back into service.

On top of that there are the usual headaches associated with running an airport, including the activities of serial stowaway Ada Quonsett (Helen Hayes). Mrs Quonsett is a nice old lady but she knows every trick in the book when it comes to stowing away on airliners and she’s utterly shameless about it. Mrs Quonsett is really more a problem for Tanya Livingston (Jean Seberg) to deal with, Mrs Livingston being the local representative of Trans Global Airlines. But since Mrs Livingston is Mel Bakersfeld’s mistress he finds himself having to help her out with the ageing but indefatigable stowaway.

Mel Bakersfeld has problems with his personal life as well and they’re going to come to a head on the very night when he really does not need more things to worry about. He devotes so much time to his job that his marriage has started to crumble and his wife Cindy (Dana Wynter) is fed up.

Trans Global’s chief pilot Vernon Demerest (Dean Martin) has problems as well. He’s been having an affair with beautiful stewardess Gwen Meighen (Jacqueline Bisset) and now she’s pregnant. And Vernon has discovered something far more disturbing than that - he’s fallen in love with her.

Another man with problems is Trans Global’s chief engineer Joe Patroni (George Kennedy). He has to find a way to move that 707 blocking the main runway.

It was going to be a difficult night anyway but sad loser D. O. Guerrero (Van Heflin) is about to make it a potentially disastrous night. He’s decided that the only way he can provide for his family is to blow himself (and a hundred or so passengers) to bits on board Trans Global’s evening flight to Rome so that his family can collect his flight insurance.

If Burt Lancaster had a fault as an actor it was a tendency to be overly intense but he keep that tendency in check here. He knows that he has to make Bakersfeld a sympathetic character and he succeeds in doing so. Mel Bakersfeld is a difficult man whose devotion to his job has wrecked his marriage but he is aware of this flaw in his character, and he’d like to do something bout it. He just can’t figure out what he can do.

For the most part Dean Martin regarded his acting career as an amusing hobby and he loved nothing better than to ham it up as outrageously as possible (as he did in the delightful Matt Helm spy spoof movies such as The Wrecking Crew). That does not however mean that he couldn’t act. When serious acting was required he could turn in a remarkably effective performance, as he did so memorably in the brilliant Howard Hawks western Rio Bravo. Martin takes his role in Airport quite seriously and he makes Vernon Demerest an interestingly complex character. He can be quite an abrasive character and he has an ego as big as all outdoors. Underneath this not entirely attractive exterior he is however a man of genuine substance. He’s a dedicated professional and as the movie progresses he finds (somewhat to his own surprise) that he’s a man of substance when it comes to his emotional life. Whatever the cost he is determined not to let Gwen down. It’s a nicely judged performance by Martin.

The fateful Trans Global flight to Rome has not just one senior pilot but two. Demerest is doing a routine evaluation of Captain Anson Harris (Barry Nelson), a pilot with as much experience as Demerest. The relationship between the two men is played quite cleverly. The temptation either to make the two pilots buddies, or to make them antagonists, is resisted. The two men know each other reasonably well professionally but being polar opposites in temperament they have never become close friends nor are they ever likely to. Nonetheless they get on quite well and have no difficulty working together in a crisis.

Ada Quonsett is the sort of character who could have been extremely irritating but Helen Hayes avoids the twin temptations of making her merely ridiculous or sentimentalising her performance. She’s there to provide some comic relief and she does it very effectively. Jean Seberg is equally impressive and is able to make Tanya Livingston a three-dimensional character. Jacqueline Bisset proves to be perfectly competent as Gwen. Dana Wynter is also good as Bakersfeld’s shrewish wife.

This movie has producer Ross Hunter’s fingerprints all over it. Hunter liked big glossy glamorous movies with plenty of star power, very high production values and packed with entertainment. His philosophy was simple - people go to the movies for entertainment so that’s what you give them. Hunter had used the split-screen technique in his 1959 hit Pillow Talk and that technique is used also in Airport. And it’s used in exactly the same way - whenever two characters are talking by telephone (or radio or whatever) the split-screen is used. It’s used very extensively indeed in Airport but it works. If this movie has a theme it’s the importance of effective communication and this technique conveys that quite nicely.

Airport is in some ways an old-fashioned movies, even by the standards of 1970. All Ross Hunter’s movies are rather old-fashioned, but old-fashioned in a good way. It really is pure entertainment and it delivers the goods. It has melodrama but it’s done extremely well and when the disaster subplot kicks in it’s handled with consummate skill. The special effects are in general exceptionally good.

If old-fashioned entertainment appeals to you then there’s no reason not to love Airport. Highly recommended.