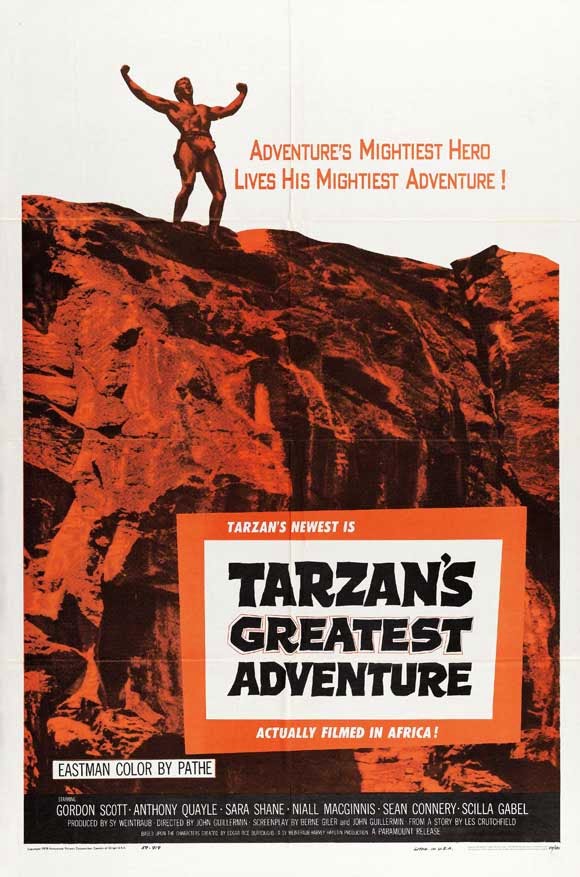 Tarzan’s Greatest Adventure, released in 1959, was notable as being one of the few attempts to bring Tarzan to the screen in a form that was reasonably faithful to Edgar Rice Burroughs’ conception of the character as delineated in his novels beginning with Tarzan of the Apes in 1914. Burroughs’ Tarzan was not a wild man who could barely speak intelligible English. He was literate and although his education was spotty he was certainly not an uneducated man. He was genuinely a man caught between two worlds but the key to understanding the character was that he was quite capable of existing in both worlds. His understanding of the jungle was profound but he understood the ways of civilisation perfectly well.

In some ways this makes the rôle more of a challenge to an actor since he has to make both sides of Tarzan convincing. Gordon Scott does a very creditable job of doing just that.

This movie is also noteworthy for its very strong cast overall with Anthony Quayle being being particularly good as the sinister Slade. A pre-James Bond Sean Connery is quite entertaining as the ruffian O’Bannion.

There is no Jane in this movie but Tarzan does acquire (much against his will) a sort of female side-kick in the person of the glamorous but cynical Angie (Sara Shane). 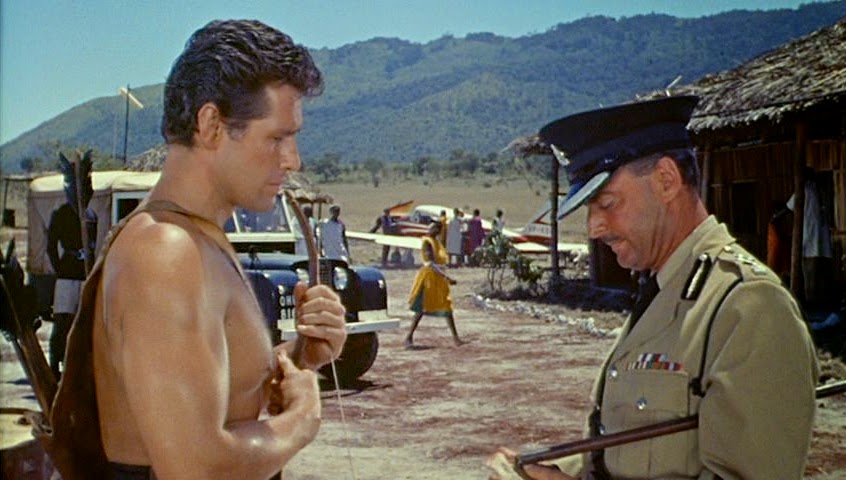 The movie starts with a robbery by a group of what appear to be natives (although we will soon discover that they are in fact white men). The robbery ends with a couple of brutal murders and this sets the tone for the film - this is to be no light-hearted jungle adventure romp.

Slade (Anthony Quayle) and his villainous cohorts carried out the robbery, their object being explosives. They will need the explosives when they reach the diamond mine which is their real objective. Kruger (Niall McGinnis) is a somewhat sleazy German who may or may not be an ex-Nazi. Slade needs him because although he doesn’t know too much about mining but he does know about diamonds and he knows how to cut the stones. Dino (Al Mulock) provided the boat, an essential requirement if they are to reach the mine. O’Bannion (Sean Connery) is there to provide muscle. The fifth member of the party is Slade’s girlfriend Toni (Scilla Gabel). 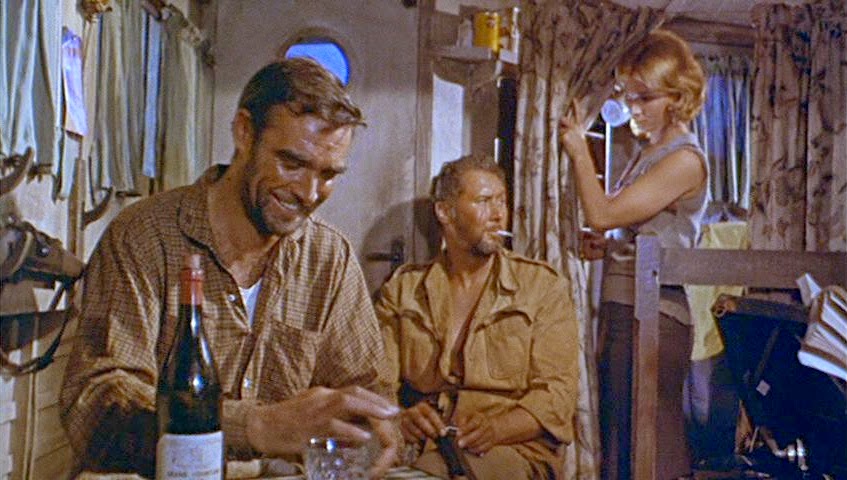 Tarzan and Slade have encountered each other before. Tarzan’s objective is to bring the murderers to justice but he has a personal motivation as well, having experience of Slade’s treachery and viciousness. Slade is well aware that Tarzan is a very dangerous enemy. It’s four men against one but Slade realises that those odds may not be enough when dealing with Tarzan.

While Slade’s party sets off upriver to reach the mine Slade knows that they are the quarry and Tarzan is the hunter.

Tarzan acquires a companion when daredevil pilot Angie, who was amusing herself by showing off her flying skills while Tarzan paddled his canoe, gets a bit too clever for her own good and crashes her aircraft. There’s no time to take her back to civilisation so Tarzan reluctantly accepts that she will have to accompany him. 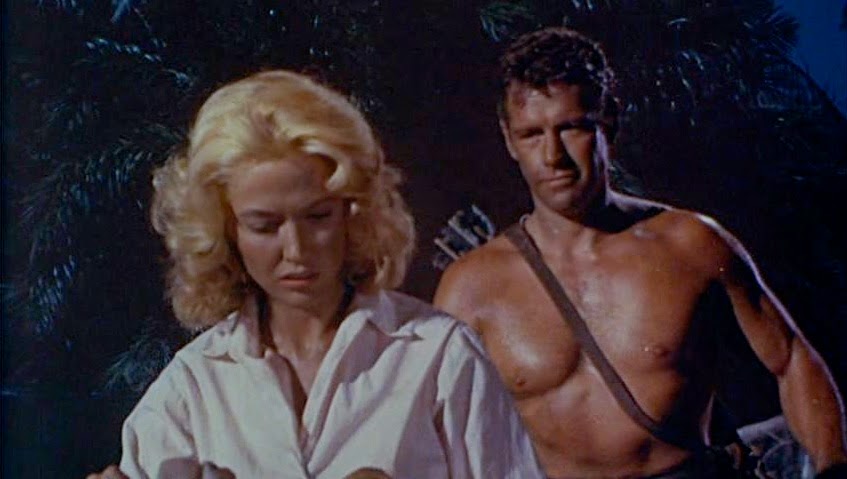 Another very unusual feature for a Tarzan film is that it was shot partly on location in Kenya. This adds verisimilitude and while the scenes on the river necessarily involved quite a few process shots they’re very well done. It might not have been a very big budget movie but it looks impressive.

There’s no shortage of action either. British director John Guillermin had a lengthy and fairly interesting career which included one of the best air war movies ever made, the criminally underrated The Blue Max. He would also helm a much later jungle adventure movie, the enjoyably camp Sheena: Queen of the Jungle. Guillermin handles the action scenes well. Not having a huge budget made it difficult to stage spectacular action set-pieces so Guillermin instead relies largely on the tension inherent in Tarzan’s hunting of his deadly human quarry (who is also trying to hunt him). 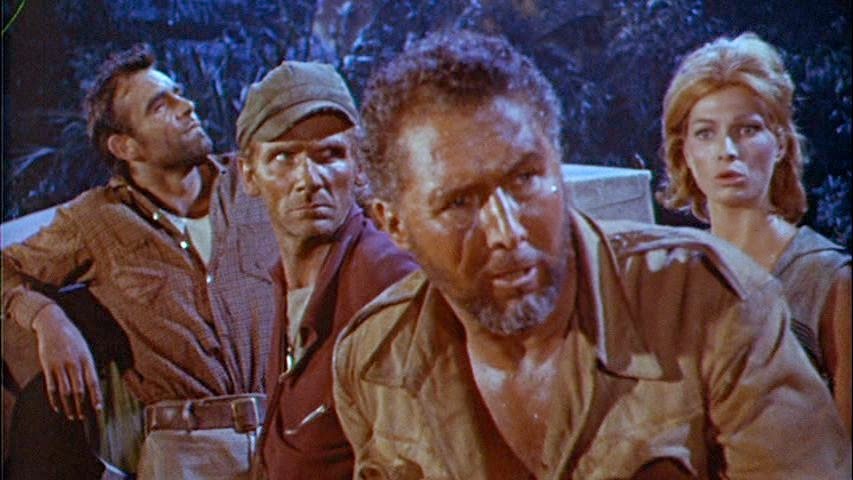 The Warner Archive made-on-demand DVD is more than satisfactory, providing a fine anamorphic transfer. Image quality is generally reasonably crisp and the colours are pleasingly vibrant without being excessive.

Tarzan’s Greatest Adventure offers us a much more interesting than usual Tarzan. There’s  some terrific acting from Anthony Quayle (an actor who could play heroes or villains with equal effectiveness and in this instance gives us a very nasty villain with a bit of depth). While Gordon Scott is good as Tarzan he’s overshadowed a little by Quayle, who has the advantage of being the villain (it’s always easier to play an entertaining villain than an entertaining hero) and of course Quayle was a very experienced and very distinguished actor. The supporting players are all very competent. The story is pretty basic but it’s very well executed and there’s plenty of excitement. Highly recommended.
Posted by dfordoom at 21:56

Dfordoom, I enjoyed your really good write-up of TARZAN'S GREATEST ADVENTURE(1959). I agree with you on every point. I'm a Tarzan movie fan from a long way back. Also, I like the Edgar Rice Burroughs Tarzan novels.

I'm having trouble being able to comment on your Classic Movie Ramblings site. When I click on to comment, I'm informed to click on the button below to sign in with Google, which I do, but it just takes me back to the top and the only sign in is to create a blog, which I'm not doing. Am I doing something incorrect?

Walter, I can't explain the commenting problems. Comments on Classic Movie Ramblings are now unmoderated so comments should just go through. I don't think it's a problem with the blog. I think it's a problem with Google. Signing on to Google is sometimes tricky. Try signing on and then open a new tab and go to the blog. Sometimes Google keeps giving you a screen telling you to sign on when you've already signed on successfully.