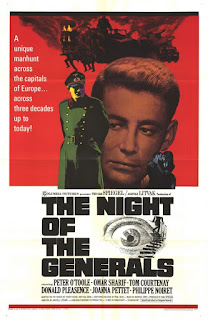 Movies that try to mix genres and do several things at once often succeed on one level and fail on another. The Night of the Generals is an ambitious film that tries to do lots of things, and it fails on every level.

The story begins in Warsaw in December 1942. A polish prostitute is murdered. Apart from being a prostitute she also happened to be an agent for German Military Intelligence. A man was seen leaving the apartment house in which the murder took place. The witness however did not see the man’s face. All he saw was the uniform, and it was the uniform of a German general.

Intelligence officer Major Grau (Omar Sharif) undertakes the investigation of the murder. There were a lot of German generals in Warsaw at the time but only three who had no alibi - General von Seidlitz-Gabler (Charles Gray), General Kahlenberge (Donald Pleasence) and General Tanz (Peter O’Toole). With a war going on in which millions of people were dying the murder of a prostitute might seem to be a trivial matter but that’s not how Major Grau sees it. Murder is still murder. And to Major Grau it makes no difference if the murder was committed by a general. As he remarks to his aide, “If it is a German general…we shall have to hang him.”

Not surprisingly Grau’s investigation makes little progress. Generals are in a position to frustrate attempts by junior officers to investigate them. In this case getting Grau out of the way is extremely simple. He finds himself promoted to Lieutenant-Colonel and transferred to Paris.

A year and a half later another murder is committed, in Paris. The victim is a prostitute and the killing bears a remarkable similarity to that Warsaw murder. As it happens all three generals who were the suspects in the Warsaw slaying just happened to be in Paris at the time. And of course Major Grau is still in Paris. Grau is the sort of detective who just never gives up and he re-opens the investigation, and this time he has the assistance of Inspector Morand (Philippe Noiret) of the Paris police.

The second murder takes place on July 19th 1944, the day before the most famous of the many attempts by the German Army to assassinate Hitler. Both General von Seidlitz-Gabler and General Kahlenberge are involved in the plot.

General von Seidlitz-Gabler’s daughter Ulrike (Joanna Pettet) has been having an affair with Corporal Hartmann (Tom Courtenay), a member of the general’s staff. Corporal Hartmann is assigned as General Tanz’s driver. Tanz is not involved in the plot to kill Hitler and von Seidlitz-Gabler and Kahlenberge are anxious to have him out of the way on the day of the assassination attempt so Tanz is ordered to take a couple of day’s leave, which he spends seeing the sights of Paris.

Major Grau believes he may be getting close to solving his case but July 20th 1944 turns out to be a bad day on which to try to arrest a general, with everything in a state of confusion after the abortive assassination attempt.

These wartime events are intercut (in a rather ham-fisted fashion) with events that occur twenty years later in Hamburg, when yet another prostitute is murdered.

The sad thing about this movie is that the central idea is a very good one and could have made an excellent story. Unfortunately the various sub-plots are only connected together in a tenuous and clumsy manner and the sub-plots slow things down very badly. At 148 minutes this is a very long film. Much too long, especially when it’s padded out to that length by completely irrelevant sub-plots.

The movie was based on a novel by Hans Hellmut Kirst and a story by James Hadley Chase. The screenplay, by Joseph Kessel and Paul Dehn, is poorly structured and unfocused. The main plot is a mystery plot and it had the potential to be a very interesting one but it’s ruined by its incredibly clumsy obviousness. The identity of the killer is revealed too soon but this hardly matters because I doubt that there would be a single viewer of this movie who would not have correctly guessed the identity of the killer within the first 20 minutes.

Major Grau might be an admirably determined fellow but we don’t see him doing any actual investigating. He simply keeps turning up trying to interview the generals without succeeding in doing so. There is absolutely no attempt made to develop the mystery plot.

The plot against Hitler sub-plot isn’t terribly exciting since everyone already knows that it failed. The romance sub-plot between Corporal Hartmann and Ulrike is uninteresting and irrelevant.

The film’s biggest flaw however is that we learn virtually nothing about the three generals. We know that von Seidlitz-Gabler is an ambitious political general and that he likes women. We know that General Kahlenberge is a pretty decent fellow. We know that General Tanz is a fanatic and a psychotic and is utterly ruthless in carrying out orders regardless of civilian casualties. The trouble is that we know nothing about their private lives or their motivations. We are told nothing that might suggest why one of these men might be a murderer.

The performances are all over the place. Omar Sharif is surprisingly good as Major Grau. Casting an Egyptian actor as a German officer was an odd choice but Sharif just about gets away with it. Unfortunately he does not get enough screen time. Charles Gray is extremely good. It’s strange seeing Donald Pleasence playing a kindly sort of chap but he does a reasonable job and he’s very effective in portraying a man slowly becoming more and more disillusioned and yet still trying to conform to his moral principles.

Major Grau, General von Seidlitz-Gabler and General Kahlenberge are all potentially fascinating characters but their personalities are not explored in any depth and the actors are not given the opportunity to make them fully rounded characters.

The supporting characters, of whom there are far too many, are mere ciphers. Tom Courtenay and Joanna Pettet make no impact at all. Philippe Noiret plays Inspector Morand as a tedious stereotypical French Resistance hero. It’s a clumsy attempt to show us the contrast between the brave noble French and the dastardly Germans.

Peter O’Toole’s bizarre and absurd performance would have been enough on its own to sink this movie, if it hadn’t already been sunk by the incoherent script. This may be O’Toole’s worst ever performance, which is saying quite a lot.

This movie is obviously trying to tell us something profound about the nature of evil and about the evil of the Nazis, although exactly what it’s trying to tell us I’m not sure. It also tries to show us that Germans weren’t all evil but it does so by presenting us with stereotyped Good Germans (who all hate the war and hate Hitler) and stereotyped Bad Germans (who all love the war and love Hitler).

This is a train wreck of a movie but while train wrecks can often be morbidly fascinating this one does not even have that going for it.

A potentially excellent idea, entirely wasted. A chaotic mess of a film. Connoisseurs of spectacularly bad acting might want to see it for O’Toole’s outlandishly awful performance. A movie to avoid.