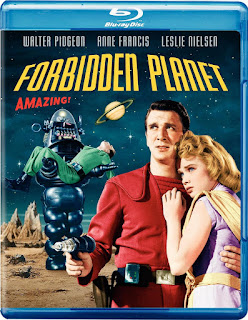 Forbidden Planet was perhaps the most ambitious of all 1950s Hollywood science fiction movies. It was ambitious in terms of visuals, being made in colour and in Cinemascope with a big budget and special effects that were cutting edge at the time. It was also ambitious in terms of ideas. This is not just a space adventure movie or a western transferred to outer space. It really does try to say things about the human condition, and despite some moments of Freudian silliness it doesn’t embarrass itself too much in doing so. And of course it’s ambitious in its choice of source material - Shakespeare’s The Tempest.

A United Planets cruiser captained by Commander Adams (Leslie Neilsen) arrives at the distant planet Altair-IV in the early 23rd century, its mission to search for survivors of an earlier expedition. There’s only one survivor from that original spaceship (the Bellerophon) and that’s Dr Morbius (Walter Pidgeon), but he’s certainly made himself comfortable. He lives in luxury, pursuing his scientific work, and he most definitely does not want to be disturbed. He’s especially keen to keep his daughter Altaira (Anne Francis) away from contact with visitors from Earth.

It seems like Morbius has turned Altair-IV into a paradise in outer space but there is a serpent in this Garden of Eden. Something killed everyone on board the Bellerophon except for Dr Morbius and that something could return, and Morbius suspects that it has returned. 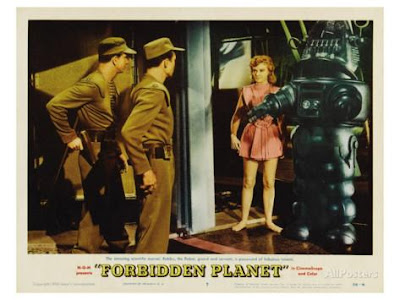 It’s a long wait for the action to start but then this is not an action-oriented science fiction film. The action is there because the studio knew the audience would expect it in a sci-fi movie. When the action does begin it proves to be quite satisfactory.

Cyril Hume’s screenplay is workmanlike. There are some big ideas here but while they’re treated intelligently enough they’re not developed in very great depth, which is perhaps just as well. MGM took a big risk with this film and it was important to keep the right balance between ideas and entertainment, and Forbidden Planet does in fact strike just about the perfect balance. 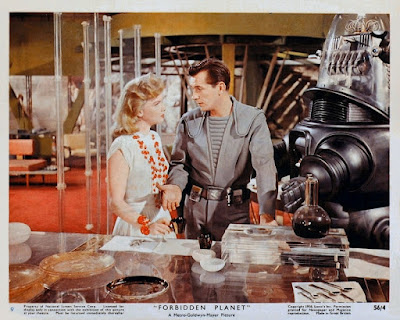 Director Fred M. Wilcox enjoyed his greatest success with family-oriented fare like Lassie Come Home. He was probably the wrong director for this movie - it needed a bit more of a sense of urgency and excitement. Wilcox’s pacing is a bit leisurely and his overall approach is just a little on the bland side. We know that there’s going to be some kind of climactic action scene but the tension possibly needed to be built up just a bit more gradually.

The alien landscapes are rendered using matte paintings and they do look like matte paintings. That’s a characteristic of the technology of the time that you just have to accept, and personally I think they look pretty cool. They do look artificial but that’s not as much of a problem as you might think - this is not a movie that is obsessed with realism, in fact it’s a movie that deliberately chooses to eschew realism, aiming instead for a hint of the dream-like. 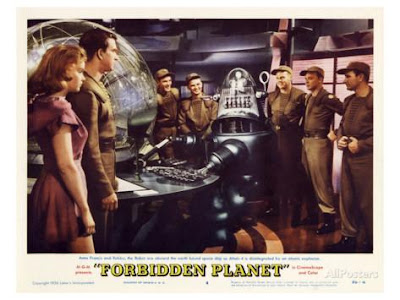 The sets are simply marvelous. This is 1950s futuristic style at it its most awesome. The Krell complex is extremely impressive. There’s some truly dazzling production design here.

Dr Morbius, based on Shakespeare’s Prospero, is played with class by Walter Pidgeon. Anne Francis as his daughter (based on The Tempest’s Miranda) looks gorgeous and is quite convincing as a girl who has lived her whole life apart from all human contract other than her father. The role of Ariel in the play is fulfilled, not entirely successfully, by Robby the Robot. He’s a very cool robot but he’s used almost entirely for comic relief. Leslie Neilsen (who was a decent enough dramatic actor before turning to comedy late in his career) does a fine job as Commander Adams. 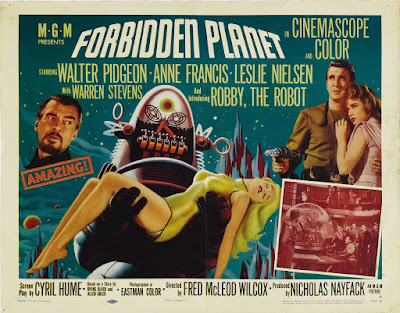 Warner Brothers have done a terrific job with their Blu-Ray release. It looks superb and this is the kind of movie that can only be appreciated if it’s given this sort of treatment. It’s definitely worth the money to have this one on Blu-Ray. There are also plenty of extras.

Forbidden Planet tries to be intelligent sci-fi that is also fun and on the whole it succeeds. It’s a bona fide classic and a must-see movie. Highly recommended.
Posted by dfordoom at 19:23

Not only did it have a much more sophisticated premise (Freudian psychology vs. radiation induced giant monsters that most used at the time), but it has a cool theremin soundtrack!

Yes, the soundtrack is very effective and was extremely innovative for the time.

I think that Forbidden Planet's failure at the boxoffice was interpreted by the major studios that there was a limited audience for Sci Fi movies and it wasn't worth spending a lot of money on them. And this killed Science Fiction as a subject for any big budget movies for the next couple of decades. From the middle of the 1950's on, The American SF movies that came out were always independent, low budget productions. Distributed through a major studio, but not produced by them. Only Toho Studios in Japan made a regular practice of producing Science Fiction features at this time.
I think that not only is the direction in this film lacking, but the casting of Leslie Neilsen was not the best choice. He was not an A-List lead actor. The two other successful major studio Science Fiction features of the early 1950's did have A-list actors in them "Day The Earth Stood Still", Paramount (1951), had Patricia Neal, who was in the midst of a scandal involving her affair with married actor Gary Cooper, and Disney's 1954 release "20,000 Leagues Under The Sea" had two,Kirk Douglas and James Mason. Universal International's "This Island Earth"(1955) had no A Level actors in it. Now Neilsen is fine, but he wasn't at this time any sort of a box office draw. This film needed someone like Sterling Hayden, William Holden or Rock Hudson in the lead, performers whose name on the marque bring people into the theater in spite of what type of movie they are in. But, in my opinion the studios never like Fantasy or Science Fiction much to begin with. I'm guessing that it is mainly a generational thing, the studios were still being run by the same men who had started them back before 1910. And if a movie of this typed flopped, it was a good enough reason to just not bother making any more like it for a while.
The failure of "Forbidden Planet" was that they focused too much on getting the effects right, but not enough attention to what works in a movie; mainly the script, the director and the casting. In this case the script for Forbidden Planet was fine, it just needed a better director and a popular lead actor to become a movie that would have made back its production expenses.