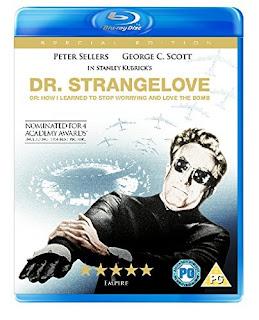 In the early 1960s Stanley Kubrick had become obsessed by the subject of nuclear war. He had been particularly impressed by a novel called Red Alert by Peter George. The idea of a nuclear war breaking out by accident seemed like a horribly real possibility. Kubrick’s original intention was to film the novel as a straight thriller. In 1964 he changed his mind and decided to treat the subject as comedy. This represented an enormous risk and there were those who thought he was about to throw away his career. In the event of course Dr. Strangelove or: How I Learned to Stop Worrying and Love the Bomb was a huge hit when it was released by Columbia in January 1964.

The basic idea is that the commander of a Strategic Air Command airbase, General Jack D. Ripper (Sterling Hayden), decides that he can no longer stand by and watch communists steal the nation’s precious bodily fluids so he launches his own personal nuclear strike. He orders the thirty-four B-52 bombers under his command to attack targets in the Soviet Union. Ripper believes that once the president realises the bombers cannot be recalled he will have no choice other than to launch an all-out nuclear war. The Soviets will launch their missiles and bombers in a retaliatory strike so the US might as well get in the first strike.

Due to a series of blunders and misfortunes there seems to be no way to prevent General Ripper’s B-52s from going ahead with their strike. 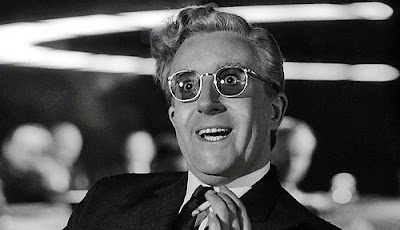 The President, played by Pete Sellers, is appalled. He’s even more appalled when his scientific adviser, Dr Strangelove (also played by Peter Sellers), conforms that the Soviets have a doomsday device. If General Ripper’s bombers reach their targets the doomsday device will be triggered and it will be the end of life on Earth.

Sellers also plays the stuffy Group Commander Lionel Mandrake, an RAF officer on secondment to the Strategic Air Command and acting as Ripper’s executive officer, is horrified also and quickly realises that Ripper is quite mad. Unfortunately Ripper is smart as well as mad and he’s seemingly thought of every counter-move that could be made to stop the bombers from launching their attack. 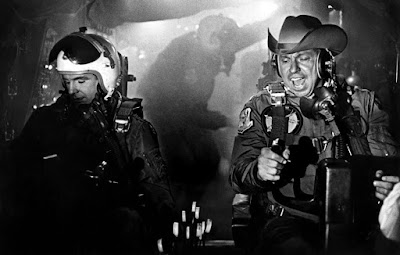 General Buck Turgidson (George C. Scott) is horrified but also oddly excited by the prospects. He knows Ripper is mad but Ripper’s twisted logic makes sense to him. Why not take the opportunity to start a nuclear war? He’s confident that US casualties can be limited to only ten or twenty million dead which seems to him to be perfectly acceptable.

The decision to play this as a mixture of satire and black comedy mostly works. It works because the performances mostly work. George C. Scott is an absolute delight as the excitable Buck Turgidson, swinging wildly between sanity and his own kind of madness. Sterling Hayden is a joy as the terrifyingly insane Ripper. Keenan Wynn as Colonel Bat Guano (who is ordered to attack Ripper’s airbase and capture the mad general) and Slim Pickens as Major Kong, the pilot of one of the B-52s and a man who treats war as if it’s a rodeo event, are both wonderful. 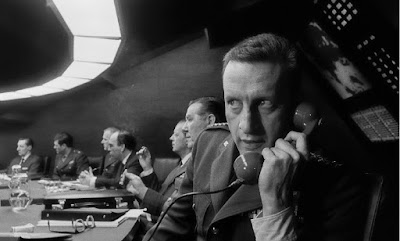 Now we come to Peter Sellers. I’ve always had serious reservations about Sellers as a comic actor. He’s not bad here although his performance as Dr Strangelove seems to me to be too over-the-top and threatens to nudge the film over the line into mere silliness.

One  can only be thankful that Kubrick was prevailed upon to drop the pie fight scene. Treating this kind of subject matter as comedy was risky but apart from that mercifully cut aberration it succeeds.

The first time I saw this movie I wasn’t overly impressed. The Cold War was still going on and the movie seemed to me to be a bit silly. The idea of people in a position to start a world war being maniacs or bumbling fools (or both) seemed implausible. Today it all seems very plausible indeed. 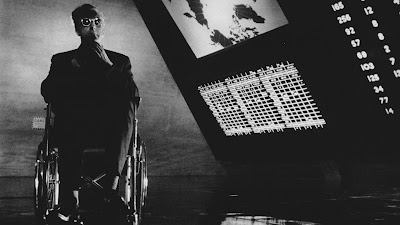 It’s also undeniably very funny. The gamble of playing it as comedy not only pays off, in retrospect it’s hard to see how it could have achieved its impact in any other way.

The highlight is undoubtedly George C. Scott’s inspired performance. And whatever misgivings I have about Peter Sellers he is very funny here (and apparently improvised most of his dialogue).

Mention must  also be made of the superb War Room set designed by Ken Adams. The black-and-white cinematography is stunning and the social effects still hold up pretty well.

While Dr Strangelove was in production Columbia was also making Fail-Safe, a straight thriller with an eerily similar plot. So similar that Kubrick promptly sued. Dr Strangelove beat Fail-Safe into the theatres and was a huge hit while Fail-Safe did only modest  business at the box office. Which was hardly unjust since Dr Strangelove is by far the better film.

Dr Strangelove is a rare political film that manages to be wonderfully entertaining as well. Highly recommended.
Posted by dfordoom at 23:28

In addition to Slim Pickens as Major Kong, the bomber crew is terrific with Shane "Thunderbirds" Rimmer and James "Darth Vader" Earl Jones as the co-pilot and bombadier. I always find it amazing that you end up rooting for them to succeed. :)

@Randall Landers
"I always find it amazing that you end up rooting for them to succeed. :)"

Yes, that's quite a clever touch in the film. Did you know that Major Kong was originally going to be played by Peter Sellers?