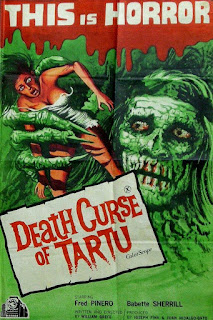 The Death Curse of Tartu was made in 1966 by Florida film-maker William Grefé and while it’s not one of the all-time great horror movies it is quite impressive for a production with the incredibly minuscule budget of $27,000. And it does entertain.

Archeologist Sam Gunter is heading off into the swamps of the Everglades to excavate an ancient Indian burial mound. Guide Ed Tison (Fred Pinero) and his wife Julie (Babbette Sherrill) have arranged to take a group of Gunter’s students (two guys and two girls) out to meet up with Gunter to assist in the excavation. Sam had set off alone in a canoe but the students have a couple of airboats.

There is a local legend that 400 years earlier a witch-doctor named Tartu had placed a curse on anyone who disturbed his burial place but of course no-one takes the legend seriously. It remains a joke until Tartu claims his first victim. His first victim, but not his last.

Tartu claimed to have the power to transform himself into wild animals and it is this power that will be awakened if the curse is invoked. This was a clever move by writer-director Grefé. It allowed him to have a supernatural monster but without having to do special effects. He could just use real wild animals, which was no problem since he had a friend who was accustomed to dealing with everything from anacondas to alligators. 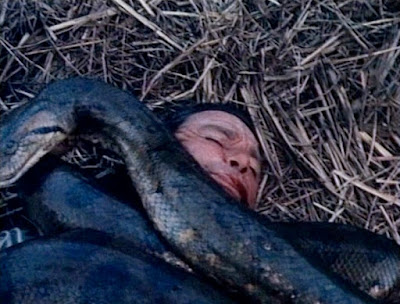 The realisation soon dawns on the party of students that Tartu’s curse is a reality and to make matters worse their airboats have been wrecked and they’re stuck in the middle of the Everglades with the nearest help at least twenty-five miles away.

It’s a nice simple uncomplicated plot which Grefé happily admits was based on the legend of the curse of Tutankhamun. It allows for lots of action and terror.

The movie’s biggest asset is the setting. Being pursued by savage supernaturally empowered wild beats is not a good thing at any time but when you’re stuck in a swamp it’s a whole lot worse. Grefé uses the Everglades pretty effectively to heighten the apparent hopelessness of the situation and the swamp itself seems to be consciously malevolent. 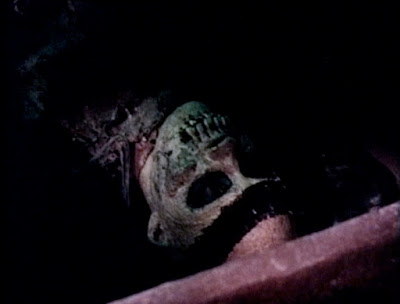 The wild animal scenes vary in quality but considering the tiny budget most of these scenes work pretty well. They work because, as Grefé explains in the commentary track, they were all done for real. That’s no rubber snake that is supposedly squeezing the life out of one hapless character, that’s a real and very large anaconda and it’s very much alive. And the alligator chasing young Cindy (Mayra Gomez) is a real alligator and it’s not even a tame one and it really is a couple of feet behind her. How Grefé managed to persuade his performers, especially the actresses, to do such scenes is a mystery that not even Grefé can explain. Apart from being menaced by incredibly dangerous wild animals these lucky actresses also got to be tossed into stinking swamps (infested with deadly snakes) which must have been great fun for them given that they had no luxurious dressing trailers to head for afterwards - the nearest showers were miles away. These gals had plenty of pluck.

The Tartu makeup is pretty creepy as well, and the burial cave (created on a makeshift set in as storeroom) doesn’t look too bad. 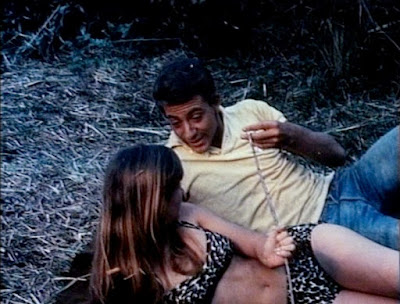 Grefé wanted to introduce some movement and excitement by employing some tracking shots so he came up with his own technique - using canoes as dollies. It works very well.

A major highlight comes when in the middle of the swamp the students suddenly decide to have a beach party. Luckily these intrepid girl archaeologists remembered to pack their bikinis. You can’t do proper go-go dancing without your bikini. These youngsters can’t seem to decide which activity would be most fun - toasting marshmallows, go-go dancing or making out. Toasting marshmallows wins out. I’d have thought the two (rather pretty) girls might have been a bit miffed that their physical charms weren’t sufficient to keep their boyfriends amused. 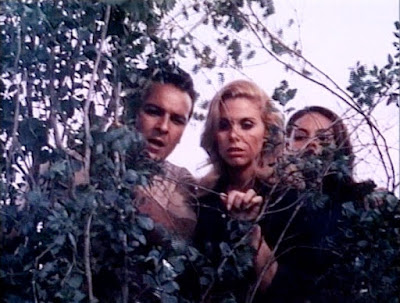 The acting is variable but good enough for the kind of film this is.

Something Weird’s DVD includes another Grefé horror movie made a year earlier, Sting of Death. Both movies are accompanied by commentary tracks in which Frank Henenlotter joins Grefé. The commentary track for The Death Curse of Tartu is as much fun as the movie. Extras include a couple of bizarre shorts as well. The Death Curse of Tartu was, surprisingly, shot in colour. The transfer is OK and quite acceptable given the rarity and obscurity of the movie.

The Death Curse of Tartu is enjoyable low-budget schlock. Recommended.
Posted by dfordoom at 16:08