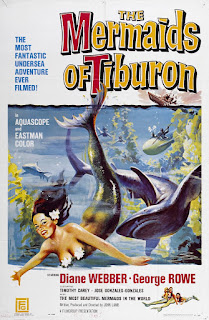 Which brings us to the erotic element and that’s quite a complicated story. This movie exists in at least three, and possibly four, different versions. The original US theatrical version would have no trouble getting a G rating today. There was in all probability an international version with some nudity. A couple of years later Lamb did some reshoots, adding quite a bit of nudity, and retitled the film The Aqua Sex. Then, twenty-five years after its original release, Lamb drastically recut the movie and the result was the final version which was given the title Mermaids of Tiburon, The Nude version. This version has lots and lots of nudity. It’s only partial nudity. The girls are topless, although they aren’t wearing a great deal on the bottom half either. Which version you prefer is a matter of taste. The Nude Version goes a bit overboard in terms of the quantity of female flesh on display but it’s still tasteful nudity and the girls are certainly very attractive.

The plot can be disposed of very quickly. Marine biologist Dr Samuel Jamison (George Rowe) heads off to the remote island of Tiburon off the coast of Mexico to investigate reports of a hitherto unknown sea mammal seen in the area. There’s also the lure of pearls, very large pearls of very high quality, so the expedition offers the promise of both scientific interest and money. If you’re a marine biologist life doesn’t get much better than that. 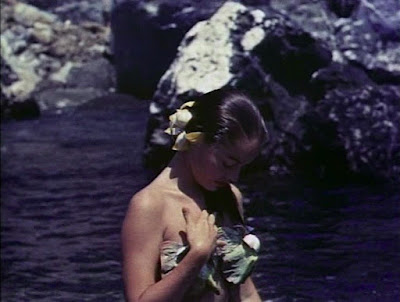 Except that Dr Jamison is about to discover that Tiburon offers a third attraction that makes science and profit seem rather unimportant. He discovers that the island is home to a colony of mermaids. Very pretty mermaids they are too. Dr Jamison knows all the legends about mermaids, how they lure men to their doom, but he’s willing to take that chance. Sometimes you have to take risks when you’re a scientist.

While Dr Jamison is busily pursuing the aquatic lovelies the unscrupulous hoodlum Milo Sangster (Timothy Carey) is after those pearls and he’s prepared to take extreme measures to get them.

The acting is mostly pretty awful although Timothy Carey’s scenery-chewing is a great deal of fun. Dr Jamison provides the voiceover narration. Whether the narration is supposed to dead serious or somewhat tongue-in-cheek is hard to say but it turns out to be rather amusing in a deadpan way. 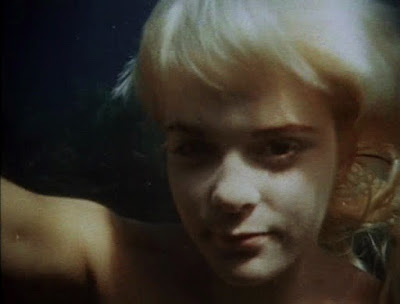 Diane Webber plays the mermaid with whom the hero is obsessed in the original version while Gaby Martone is the main focus in the Nude Version with Miss Webber’s screen time unfortunately seriously curtailed. Neither has to do much besides looking lovely and both manage that with no great difficulty.

One real oddity of the Nude Version is that some of the mermaids have tails and some don’t. No reason is given for this and one is left to assume that when Lamb did the 1964 reshoots he decided to ditch the tails because the girls without tails could wear skimpy fur bikini bottom things which show off their semi-naked behinds rather nicely.

The underwater sequences take up a very large part of the film’s running time and they’re superbly done, and not just by the standards of 1962. The fact that in the Nude Version these sequences feature beautiful near-naked women might well be seen by some people as being a definite bonus. 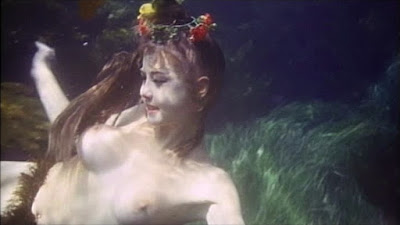 The two versions of Mermaids of Tiburon are not quite entirely different films, but the differences are significant. Apart from the added nudity the Nude Version has been extensively recut. The two versions end up being the same story turned into two different kinds of film. The original version is a charming and rather innocent romantic fantasy with just a hint of eroticism (you can’t make mermaids entirely unerotic) and it is in no sense an exploitation movie. The Nude Version still retains much of the charm but it is much more overtly and frankly an erotic fantasy movie, and it’s definitely an exploitation movie. Since John Lamb was responsible for both versions it raises interesting questions about his intentions. It would appear that his intentions in 1987 were not at all the same as his intentions in 1962. 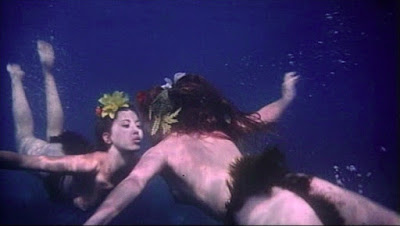 The original version is probably the better film overall, with mermaids who look like mermaids rather than just semi-naked aquatic girls. It’s also much more focused, with the hero’s attention centred on just one of the mermaids. There’s a real romantic angle involved. It works as a fantasy movie. The Nude Version isn’t terrible by any means. As long as you accept that it’s about the nude girls then it has to be said that it works in the same way that the better nudie-cuties work.

Kit Parker Films and VCI Entertainment have released this movie as their Psychotronica Volume 3 disc, paired with the Mexican-Cuban oddity Yambao. The DVD includes both the Nude Version and the original non-nude theatrical version of Mermaids of Tiburon which is rather nice since they are so different in tone. There’s also a boxed set that includes all three Psychotronica Volumes, a total of six films. They make up a varied but extremely interesting collection and the boxed set is definitely the way to go.

The Nude Version of Mermaids of Tiburon is letterboxed and the transfer is quite acceptable if not dazzling. The original non-nude theatrical version is fullframe but the image quality is slightly superior compared to the Nude Version.
Posted by dfordoom at 19:39