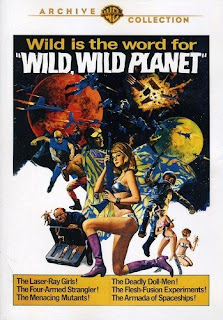 If you are familiar with Italian cinematic science fiction then you will already have a fair idea of what to expect - this is a shiny plastic and chrome vision of the future with flying cars and a huge rotating space station (called Gamma One) and rockets shuttling back and forth between the planets. This was the 1960s, so everything in the future was going to actually work. Everything in the future was going to be very cool. The men would be handsome and, more importantly of all, the women were all going to be gorgeous.

It’s not actually explicitly stated but this is a future of very advanced biotechnology so it’s possible that the women just stay young and beautiful forever. Or maybe the producers just wanted lots of hot women in the movie.

This is not Star Trek however, where sordid details like politics and business never intrude. This is a future in which real power seems to be in the hands of giant corporations. They’re not just transnational corporations, they’re transplanetary corporation. And it seems that the big money is in post-humanism - which means there’s a huge market in replacement organs. One of these corporations, CBM, has plans to grow artificial organs.

This kind of medical technology raises obvious ethical questions but CBM doesn’t seem too worried about such things. In fact CBM isn’t the least bit concerned about ethics and as will discover their chief scientist is both evil and insane.

So in some ways this movie actually does a better job of predicting the future than most British and American TV and movie sci-fi of its era. 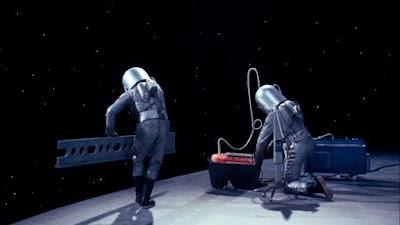 The future might be cool but it’s not trouble-free. People are disappearing. Lots of people. And in increasing numbers. There’s a suspicion that these disappearances might be connected with flocks of girls hanging around the city. The people who have disappeared may have been kidnapped by the girl. There’s also a weird sinister guy in sunglasses who keeps popping up and then vanishing.

There are some macabre touches. Like miniature people. And people with too many arms.

Commander Mike Halstead of Space Command thinks there’s a connection with the mysterious planet Delphus. Which is a bit of a worry since his girlfriend Lieutenant Connie Gomez (Lisa Gastoni) has accepted an invitation from Mr Nurmi to take a vacation on Delphus. Mr Nurmi works for CBM. 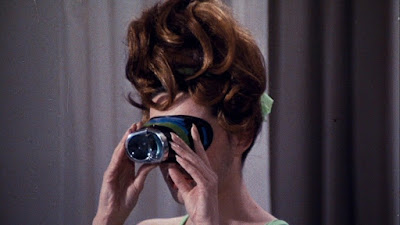 There are no space battles but there are spaceships and they look the way people in the 60s knew spaceships should look. This is the future that we never got and it looks much better than the future we actually did get. The evil robot girls are a nice touch. I’m not sure that they’re actually robots but they do seem to be an artificial maybe semi-organic life form which is actually more interesting. And the evil artificial guys are actually quite spooky.

There is some action, and even some definite hints of horror (the bad guys are up to some pretty nefarious tricks and the results are not pretty). Margheriti had spent the preceding couple of years making gothic horror movies so he had a sound understanding of creepiness.

The acting is adequate for the type of movie this is. In other words it’s enjoyably terrible. Look out for Franco Nero in a small rôle. 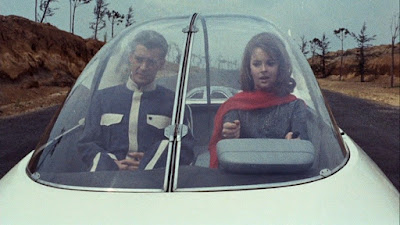 I’ve never understood why producer-director Antonio Margheriti doesn’t have a bigger following among cult movie fans. OK, he was no Mario Bava and you aren’t going to get the kind of visual genius that Bava could provide. But by the standards of European low-budget/exploitation film-makers Margheriti was quite competent and he had a very clear understanding of what sells - his horror movies (like The Long Hair of Death starring Barbara Steele) have some reasonable chills and some hints of sleaze and his science fiction movies have glamour and a certain amount of enjoyably cheesy style. His movies are undemanding fun. He went on to make three more Gamma One movies.

While the very low budget is evident the special effects and miniatures work is generally at least witty and fun even when it’s ludicrously unconvincing. Antonio Margheriti had a background in those areas and obviously loved using miniatures. It might be a cheap movie but it’s colourful and filled to overflowing with 60s visual style. The production design is original and impressive. 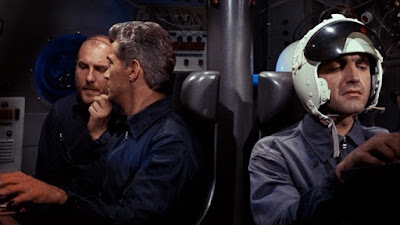 The plot is goofy and outlandish and basically crazy but it does make a kind of sense, and this is after all a mad scientist movie so the craziness is a feature rather than a bug.

The Warner Archive release offers a very nice anamorphic transfer (the movie was shot in colour and widescreen). The colours look pretty good. There are of course no extras.

The Wild, Wild Planet is not by any objective standards a great or even a good movie but as a silly outrageous popcorn movie with a lot of 60s style it’s gloriously entertaining if you’re in the right mood. And as it happens I’m always in the right mood for this type of movie! So I’m not going to apologise for giving it a highly recommended rating.
Posted by dfordoom at 20:09

I love these Gamma One movies, and their associated, Japanese-produced GREEN SLIME. In one of these, a science station is attacked by Space Yeti! You just can't think about them. Sit back with an adult beverage, some buttery popcorn, and just watch.

Randall Landers said...
"I love these Gamma One movies, and their associated, Japanese-produced GREEN SLIME. "

I'm going to have to add GREEN SLIME to my shopping list. Thanks for the recommendation!

Thanks - never seen this, although I've seen that poster more than once. I'll keep an eye out - undemanding Euro-sci-fi sounds right up my street!