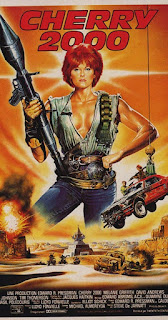 Cherry 2000 is a movie that I am, perhaps oddly, inordinately fond of. Buying the Blu-Ray release provides the perfect opportunity to revisit this very underrated little 1987 sci-fi flick.

Sam Treadwill (David Andrews) is a recycling executive in Anaheim and he’s had a hard day at work but that’s OK because Cherry (Pamela Gidley) is waiting for him at home. Cherry is not only gorgeous, she’s the sweetest girl in the world. Sam can’t believe how lucky he is to have a woman like Cherry. She is the perfect girlfriend. Tonight she’s made his favourite dinner, and the wine is ready as well. Sam and Cherry start getting romantic (as they always do). Making love on the kitchen floor seems like a really good idea - exciting but still kind of romantic (Sam and Cherry are both romantics). And it would have been a great idea, if only the dishwasher hadn’t chosen that moment to overflow. The water all over the kitchen floor doesn’t slow Sam and Cherry down (it just makes it more exciting) but then the water gets inside Cherry’s circuitry and blows her electronics completely. You see Cherry is a sex robot.

Cherry is however more than just a sex robot. She’s a Cherry 2000. You can’t get them any more. They don’t even make the parts for them now. Among connoisseurs they’re recognised as classics. The newer models just aren’t as responsive. Cherry belongs to the age when pride in workmanship was still a thing. But Cherry is now just a useless collection of electronic junk. Well, not quite. Her chip is still intact. That means her own distinctive personality (like women, every Cherry 2000 is slightly different) is still there. And her memories are still there. The memories of all the wonderful times they had together. All Sam needs to do is to find a replacement body for her.

That’s where things get tricky. Cherry 2000s are very very hard to find. There is a rumour that there’s a warehouse in Zone 7 that has some, still in mint condition. But that means travelling to the Zones. That’s something to think twice about. This is a future world that owes a good deal to Mad Max. The Zones are beyond the reach of the law. They’re seriously bad places. They’re like a nightmare cyberpunk version of the Wild West. No sane person would go there. But that’s the only place there’s a chance of finding a Cherry 2000. And Sam misses Cherry terribly. He wants her back. 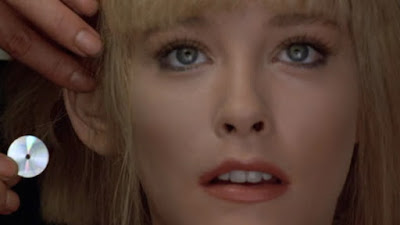 To get to the Zone he will need to find a tracker. There’s one named E. Johnson in the town of Glory Hole that sounds like just the man for the job. Except it turns out that E. Johnson (Melanie Griffith) is a young woman. And she wants Sam to come along when she goes to Zone 7 (she needs someone to ride shotgun). The movie now becomes more of an 80s action movie, but a good 80s action movie with some original and clever set-pieces (the magnetic claw, the enormous drain thing).

In between the action sequences Sam gets to know Johnson. She’s seriously tough and very dangerous but also oddly feminine. Melanie Griffith does not play Johnson as a typical action heroine. We never forget that for all her weirdness Johnson is still very much a woman. And she never forgets it. In her own way she’s a romantic, but like Sam she’s never figured out how to do the emotional relationship with the opposite sex thing, although she’d clearly like to. She’s slightly bewildered by men (in this future world the men are as damaged and deranged as the women) but she really would like to find one of her own. She’s not like any girl Sam has known before. She’s strange but somehow more like a real woman than any of the women you meet in singles bars in Anaheim. And she is a real woman. There’s no need to worry about her circuitry burning out. Of course Sam is still in love with Cherry. 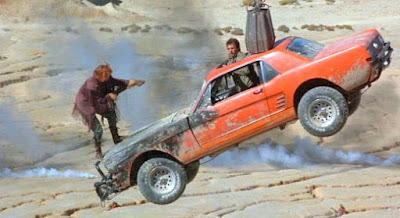 This is a very 80s movie, but it’s 80s in a good way. It has actual style. This vision of the future obviously owes a lot to the Mad Max movies and to the emerging cyberpunk genre but it has a flavour of its own. This is a slowly collapsing society. It’s collapsing economically and it’s collapsing socially. We get a glimpse of what dating is like in this future world, and we can easily understand why Sam is happier with Cherry. In this world a one-night stand requires complex legal negotiations that specify exactly what sex acts are and are not included in the package. We can only imagine how nightmarish an actual relationship would be, if people still had actual emotional relationships. With Cherry Sam does have an emotional relationship and it’s delightfully uncomplicated - he loves her and she loves him. He loves having sex with her and she loves having sex with him. They do sweet romantic things for each other. And they don’t need a lawyer to negotiate a contract for them when they want to make love.

It’s a vision of a future in which buying a sex robot isn’t something you do when you’re a hopeless loser (and Sam isn’t a hopeless loser). It’s something that really seems like the least worst of some very unappetising options.

One of the really appealing things about this movie is that despite the subject matter it isn’t crass or vulgar. It’s a movie about the search for love. It’s a love story. It’s a romantic triangle - a boy, a girl and a sexbot - and it’s handled with sensitivity. When we discover that Sam is having sex with a robot we might be slightly taken aback, but once we get to know him and once we come to understand why he loves Cherry we can’t help feeling that it’s romantic, in a weird sort of way. And as sex robots go Cherry is a very nice girl. 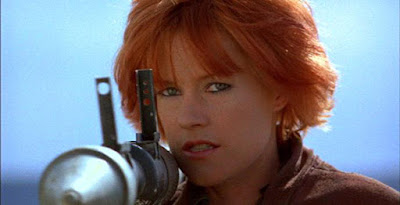 David Andrews is very good. He makes Sam slightly geeky but not too geeky and manages to avoid making him seem creepy or pathetic. Sam lives in a broken world and even if he is in love with a sex robot in a paradoxical way he’s more normal than most of the men in his world. He wants love, commitment and romance.

Melanie Griffith is one of those actresses you love or hate. I like her performance. Even that little girl voice of hers makes her an interesting action heroine. She makes Johnson eccentric and odd but still rather likeable. In her own paradoxical way she’s more normal than most of the women in this world. She seems like she wants to be fiercely independent but she also wants love, commitment and romance.

Pamela Gidney gives Cherry just that very very slight touch of disconnectedness that makes her seem like a robot that is a very realistic simulation of a woman, but just not quite right.

Some critics have fallen into the trap of seeing this as a feminist film. It’s a fine example of the way critics impose their own views on a film and ignore the film itself. This is not a gender-reversal film. While Johnson seems to be cast as the action heroine Sam is not a mere sidekick or a bumbling wimp. He’s an ex-military guy who handles himself just fine in a gun fight. He’s not a male weakling. Johnson wouldn’t be interested in him in that case. She is interested in him because she slowly learns that in his quiet unassuming way he’s reasonably masculine whilst also being caring, a combination that women have been known to fall for. And she learns that she can rely on him. 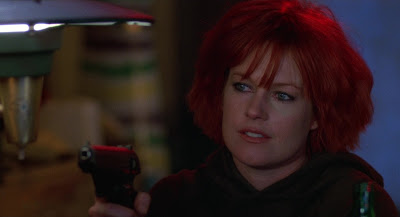 Johnson is superficially fiercely independent but in fact it’s very obvious that she’s looking for a man to love her. In this crazy future world finding a mate is extremely difficult, but she wants one. There’s a key moment, usually overlooked, when he happens to see her with her guard down and she gives him the sort of smile that lets him know she’s OK with that. Both Sam and Johnson are in the same boat - despite their surface eccentricities they’re the most normal healthy people in the movie. They both want all the things usually associated with good old-fashioned tradition marriage - love and commitment and dependability and romance. The message of the movie seems to be that these are good things and that a society that doesn’t value these things is in trouble. It’s actually a very socially conservative message.

There’s obviously plenty of satire here but Cherry 2000 doesn’t just take aim at the obvious targets such as the rampant consumerism of the 80s. It’s a movie about social collapse and about the way that the devaluing of human relationships and a society obsessed with pleasure and consumption set up a vicious feedback loop and everything falls apart.

The Signal One Region B/2 Bu-Ray looks great and there are quite a few extras including a director’s commentary track. The commentary is interesting - director Steve de Jarnatt was brought into the project very late and seems to have very little input into the film’s visual style. He was simply a hired gun working with a production team that had already been assembled. He also appears to have had no idea what Michael Almereyda’s screenplay was all about and he still doesn’t understand why the film has gained an enthusiastic cult following.

Cherry 2000 has a great deal of obvious cult appeal but it’s really an intelligent and provocative science fiction film as well as being a fine action flick. Very highly recommended.
Posted by dfordoom at 00:15