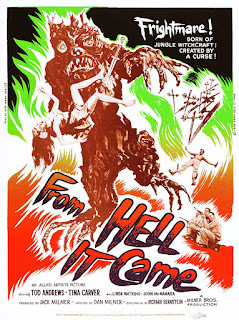 From Hell It Came may not be the silliest of 1950s monster movies but it certainly has to rank in the top five. This is the infamous killer tree trunk movie.

It opens on a small Pacific island, a US colony, with the execution of a native prince named Kimo. He’s the victim of a plot by a rival and an evil witch doctor to usurp power. Kimo was accused of helping the Americans to poison the previous chief. Kimo vows to come back from the dead and take his revenge.

The island is suffering from an outbreak of plague. The new evil chief blames the Americans. Since the Americans did explode a hydrogen bomb on a nearby island and since the fallout from the explosion did drift on to the island and cause radiation sickness it’s not difficult to see how the  new chief persuaded his people that the Americans are the bad guys. In fact of course the Americans are only there to help and to bring the natives the advantages of modern science and medicine. Spearheading this philanthropic mission are Dr Arnold (Tod Andrews) and Professor Clark (John McNamara). They’ve both been on the island too long and they’re clearly going a bit stir-crazy. Luckily they have plenty of booze. 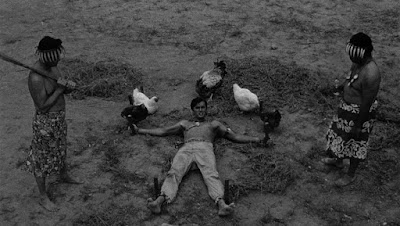 The American scientists have an uphill struggle to convince the natives to trust them but seem to be making progress when a strange tree trunk appears in the native cemetery. The locals are inclined to think it’s the spirit of Kimo that has come back in the form of the the monster Tabanga and he’s looking for vengeance. The American scientists are sceptical until they discover that the tree trunk has a human heartbeat!

The smart thing to do would be to hit the tree stump with a massive dose of herbicide but if they did that we’d be denied the excitement of seeing a rampaging tree stump creating mayhem. 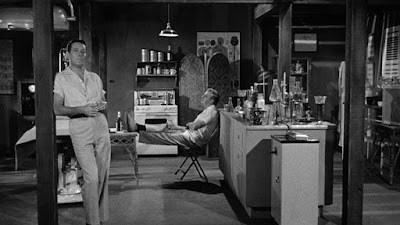 The evil witch doctor has his own plans for the Tabanga. If he can force it to do his bidding he will have an unstoppable weapon in his possession. He will be able to expel the hated Americans from the island and he will have supreme unchallenged power. No-one can stand against the Tabanga. Of course the Tabanga is just a tree with a bad attitude that moves incredibly slowly and doesn’t seem to have any superpowers but by the standards of the island it’s a super-weapon.

You might be wondering how a movie with a premise like this could possibly void descending into utter silliness. This movie doesn’t even try to avoid that fate - it dives head-first into the deepest pit of silliness it can find. 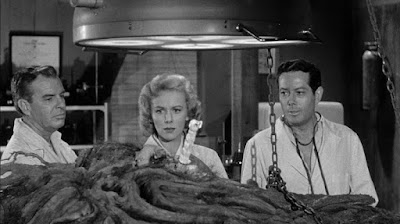 The three leads are unexciting if competent. The major annoyance is Linda Watkins as the predatory widow Mrs Kilgore. Her accent may well be the worst I’ve ever heard. I assumed she was trying for a cockney accent but then she mentions returning to Australia, so instead of being the worst cockney accent in cinema history it turns out that this is the worst Australian accent in cinema history. Added to which her acting is generally excruciating. You will find yourself praying that she will be one of Tabanga’s first victims.

The makeup effects are impressive in their own way. They wanted a walking tree trunk that looked just slightly human and that’s what they got. It looks really dumb but it does look like a slightly human tree trunk. 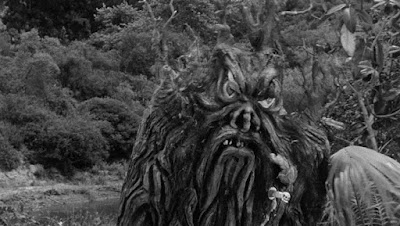 You have to admire the cast for being able to play their scenes in this move while keeping a straight face.

Apart from its silliness it’s a movie made with at least a moderate degree of competence. Dan Milner was no Ed Wood. It is excessively talky in the early stages and once the action starts it’s not all that exciting. But compared to some of the worst 50s sci-fi movies (like The Beast of Yucca Flats) it’s enjoyable in its goofiness.

The Warner Archive made-on-demand DVD offers a remarkably good anamorphic transfer. This might be a terrible movie but it looks great.

For all its many flaws From Hell It Came is oddly endearing. If you’re in the mood for a very silly monster movie it’s fun. Recommended.
Posted by dfordoom at 21:25

Tabanga rocks, but you're right. I wish he had torn Linda Watkins limb from limb. (Ironic, eh?) She's only slightly less annoying than Una O'Connor.