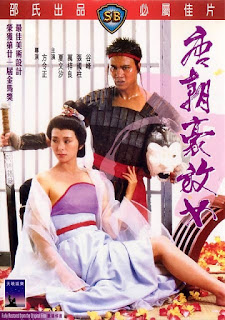 The result is a movie with lots of swordplay action and lots of nudity and sex. You’d think that would be a winning formula, and you’d be absolutely correct.

What Shaw Brothers did here however was not merely to take their standard historical swordplay formula and add copious amounts of nudity and sex. This is very much a woman-centric movie, and the emphasis is on her emotional and sexual life (and for the heroine the two are one and the same thing). The sex is what the movie is all about.

The movie is set, obviously, during the Tang Dynasty (which lasted from 618 to 907AD). This was Imperial China at the peak of its greatness, both politically and culturally. Yu Yuan-gi (Pat Ha) is a young woman who has decided to become a Taoist priestess. You might think that this means that she’s a very spiritual woman. You would be wrong. She is a young lady obsessed with two things, writing poetry and having sex. For her the Taoist nunnery is merely a convenient place to rest and recuperate after exhausting bouts of poetry-writing and love-making.

Of course the disadvantage of a nunnery is that there are no men. That’s not a problem for our heroine. She likes sex with girls as well. She’s very adaptable. Nunneries also have lots of rules but this one seems to be very forgiving of those who stray from the path of spiritual enlightenment. 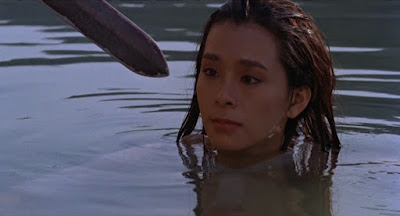 After a while she leaves the nunnery and lives a life of frivolous pleasure. She is having a swim when a guy plunges his sword into the water next to her. This gets her pretty excited. The sword belongs to hunky wandering swordsman, Tsui Po-Hau (Alex Man), with whom she hooks up. They have lots of hot sex, then he goes off and has some sword fights, then he comes back and they have more hot sex. Then one time he leaves and doesn’t come back so she goes back to the nunnery, repents of her wickedness, and proceeds to seduce her maid Lu Chiao.

Yu Yuan-gi is jealous of Tsui Po-Hau because men have it so good. It’s easy to understand why she’s jealous. The poor girl has a wretched time, living a life of ease and pleasure and spending most of her time writing poetry and having sex. It’s a tough life for a woman. 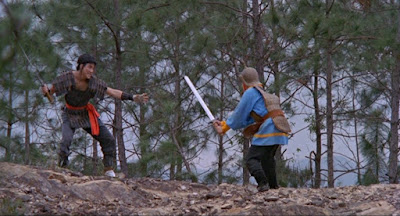 Yu Yuan-gi and Lu Chiao finally get expelled from the nunnery (apparently having lesbian sex on the premises is a bit too much even if you do offer to repent) so they move into a whorehouse. This makes no discernible difference to Yu Yuan-gi’s lifestyle. But trouble is on the horizon and Tsui Po-Hau will make his reappearance.

Pat Ha was just nineteen when she made this movie. She’s stunningly beautiful and looks equally good with or without clothes (not that she keeps her clothes on for very long). She’s also a pretty decent actress.

Alex Man’s performance is nothing if not energetic. Tsui Po-Hau is totally nuts but he’s nuts in a way that gets Yu Yuan-gi really hot - the two things he likes doing are lopping people’s heads off and having sex with her. What’s for a girl not to love? And she obviously loves bad boys. 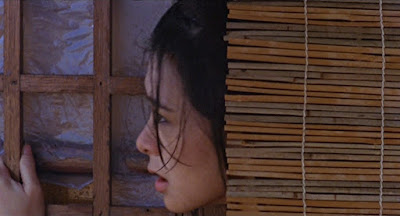 The supporting cast includes an amazing number of extremely beautiful young women. There’s certainly no shortage of feminine pulchritude here. They don’t all take their clothes off, but most of them do.

If it’s a Shaw Brothers historical movie one thing you can be sure of is that it will look gorgeous. And that’s the case here. They may not have had Hollywood budgets but every cent spent on their movies ended up on the screen. It looks like a very expensive movie. The costumes are lavish, the sets are sumptuous.

Eddie Ling-Ching Fong directs in a suitably lively manner, showing some imagination but never succumbing to the temptation to go overboard with cinematic tricks. Ardy Lam’s colour cinematography is magnificent. The colours are overwhelming. 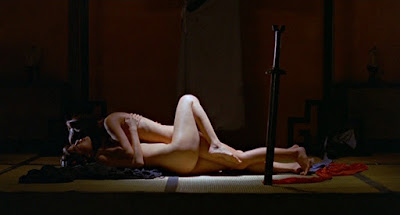 This is a strictly softcore movie but the sex scenes are quite explicit by softcore standards and they’re very erotically charged.

There are some problems with this film. The tone is all over the place and the heroine’s motivations are confusing and enigmatic to say the least. Apparently the original cut of the film was about an hour longer so this ruthless editing, although undoubtedly necessary, has left the movie making no real sense.

As to claims that Yu Yuan-gi is a feminist heroine - she is a mad, evil, manipulative and narcissistic monster who brings misery to everyone unlucky enough to cross her path. The film is based on the life story of an actual notorious poetess and courtesan of the Tang Dynasty who was apparently a pretty nasty piece of work.

One amusing thing about the movie is that Yu Yuan-gi makes a great song and dance about not accepting money from one of her admirers and claims to be proudly independent, even though it’s clear that her considerable wealth derives from her career as a courtesan. It’s typical of her essential dishonesty.

All things considered An Amorous Woman of Tang Dynasty can best be described as an interesting, gorgeous, sexy mess of a film. It’s well made and the eroticism is powerful but it’s still pretty unsatisfactory.
Posted by dfordoom at 21:54