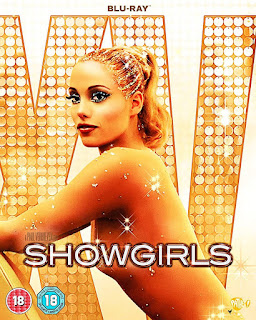 Paul Verhoeven’s infamous 1995 film Showgirls may not be the most critically reviled movie of all time but it has to be right up there in the top five. That in itself makes it interesting. I’d already seen the movie twice but recently I gave in to temptation and bought it on Blu-Ray (I already own it on DVD). I guess that has to make me a serious Showgirls fan. And I’m not ashamed.

For those who believed the critics and avoided this film the plot is straightforward. Nomi Malone (Elizabeth Berkley) arrives in Las Vegas with a dream. She wants to be a showgirl. She wants to be a superstar showgirl, like the famous Cristal Connors. She is aiming for the top, but she has to start at the bottom, working in a sleazy strip joint called Cheetah’s. She gradually works her way up. All she needs is one big break. If only by some amazing stroke of fortune she could take over Cristal Connors’ spot for one night then the world would recognise Nomi as a star. But will stardom be worth it? It’s pretty much 42nd Street but with lots and lots of nudity.

There are several ways to approach Showgirls. The easiest way is to just accept the almost universal opinion of critics at the time (and since) that it’s a spectacularly bad movie, one of the biggest turkeys of all time. The second approach is to see it as triumph of unintentional camp. Most fans of the movie (and it does have a genuine cult following) approach it this way. The third approach is to consider the possibility that the movie turned out exactly how Verhoeven wanted it to turn out, which means having to try to understand what he was actually trying to do.

I personally reject the first approach out of hand. If mainstream critics are united in reviling a particular film I immediately want to see that film. Sometimes it turns out that the critics were right but often such a film turns out to be something wondrously strange and delightful. Mainstream critics are generally incapable of understanding cult movies. Usually they ignore such movies, but Showgirls was a big-budget major-studio production so they couldn’t do that. So they savaged it.

The second approach has a lot to be said for it. Showgirls is about as camp as a movie can possibly be. Gloriously so. There are lots of moments when you ask yourself what on earth was Verhoeven thinking, or perhaps what was he smoking? Showgirls takes trashiness to places other movies never thought of going.

The third approach can be interesting. The first thing you have to do is to accept that some of the criticism levelled at Showgirls really do miss the point. For example it might be quite true that the world of superstar Las Vegas showgirls who are household names existed only in Verhoeven’s imagination. But while most people think of this movie as a Vegas movie it isn’t really. Verhoeven was not making a movie about Vegas. His target was the entire American media-entertainment world and in fact American consumerism, which (in his view) makes us all whores. I think it’s fair to say that he was also taking a swipe at celebrity worship. You might not agree with him, but those was his intentions. He could just as easily have set the movie in Hollywood but that had already been done many times and it might have been misunderstood as a movie purely about Hollywood. Las Vegas seemed better suited to his purpose. The actual Las Vegas would not have served the purpose so he invented an imaginary Vegas, in which showgirls are like movie stars.

Verhoeven was certainly aiming at satire. It’s not very subtle satire, but then Verhoeven isn’t a particularly subtle director. Verhoeven movies like RoboCop, Starship Troopers and Basic Instinct have many virtues but subtlety isn’t one of them. And even though his movies aren’t subtle they still manage to get misunderstood (Starship Troopers being an obvious example).

You have to view all the performances in the light of Verhoeven’s intentions. Judged in conventional acting terms Kyle MacLachlan is stupendously awful as Cristal’s boyfriend (sort of boyfriend in a decidedly unhealthy way) Zack, but within the context of the movie he’s just right. Zack is, like everyone else in the film, a whore. He is whatever people want him to be. Gina Gershon is immense fun as Cristal, going wildly over-the-top at every opportunity. At least Cristal knows she’s a whore and she accepts it.

Molly (Gina Ravera) is Nomi’s only real friend and she’s the only character with any real integrity. Which makes her the least interesting character (it’s that sort of movie). Robert Davi provides amusement as Al, the sleazy manager of Cheetah’s, who exploits his girls but in his own weird depraved way actually cares about them.

If Verhoeven’s objective was to strip away every thread of glamour from the glitzy greedy grasping world of Las Vegas and to expose the utter corruption and emptiness of the dreams it offers (and the dreams that Hollywood and the entire entertainment industry offer) then you’d have to say he succeeds. Showgirls has been much criticised for its lack of genuine eroticism but really that’s the point. This is sex as business. If you want it you can get it but don’t expect it to make you feel good. Vegas will chew up all your dreams and spit them out and that’s what this movie does with breathtaking ruthlessness.

The film also wants to play around with the links between money, power and sex (which again made Vegas an obvious setting). Everybody is playing power games with everybody else and all the power games involve sex. Most obviously there’s the bizarre three-way dynamic between Nomi, Cristal and Zack. Everything that happens between these three is about power, made most explicit in the infamous lap dancing scene with Cristal pulling the strings but with Nomi making a bid to take control. The power struggles between Nomi and Cristal never stop. Nomi wants money and fame but mostly she wants control.

Verhoeven did however have other intentions as well. Like so many European intellectuals he seems to have had a love-hate relationship with America. While he’s mercilessly demolishing the American dream he’s clearly besotted with American pop culture and he sincerely wanted to make Showgirls as a big-budget musical. Not quite a traditional Hollywood musical, but a Hollywood musical nonetheless.

Verhoeven was (or rather is) also a director obsessed with religious symbolism and it’s no coincidence that the show which Cristal headlines is called Goddess. The bizarre routines in the show are clearly meant to be a kind of pagan celebration of sexuality, and there’s Catholic symbolism as well.

There are times when Showgirls really does hit the target. James, the black dancer with whom Nomi becomes almost emotionally involved, wants her to give up stripping and join him in doing real dancing with serious artistic intentions but when we see his arty dance routine it’s absolutely no different from what Nomi does at Cheetah’s. James is just a whore as well but he can’t see it. And Cristal sneers that what Nomi does at Cheetah’s is not dancing but her own show at the Stardust is also no different from what Nomi does at the strip club, it’s just more expensively staged. They’re all doing the same thing. Cristal just gets paid more and James deludes himself that he’s doing art.

Joe Eszterhas’s script has been accused of misogyny, which is nonsense. This is a script which is equally brutal to all its characters, male and female. This is misanthropy, not misogyny.

Verhoeven was in fact very happy with the movie, and is still very fond of it. The reality is that nothing quite works as he intended it to, but in a way it still does work. Nothing is believable, the characters are not real people with real human emotions, but that just makes it more fascinatingly weird and hyper-real (or perhaps surreal would be more accurate). This is not reality but it’s a strange alternative kind of reality or unreality. Which perhaps is the point - Vegas is not the real world. Visually Showgirls is also of course wonderfully excessive, again to the point of hyper-reality.

At the end of the day I think the best way to enjoy Showgirls is a combination of the second and third approaches I outlined at the beginning. Verhoeven did succeed in his objective, it just happened to be an objective with which mainstream critics and audiences were violently out of sympathy and it happened to succeed in a very strange sort of way.

It can certainly be enjoyed as a weirdly mesmerising exercise in extreme camp or even out-and-out kitsch, but it’s more enjoyable if you also view it as a movie with serious intentions that often fails but in failing it succeeds on a whole different level of weirdness. Most bad movies are either just bad or they’re just bad movies that are so crazy that they’re entertaining. Showgirls is something else again. It’s bad in conventional terms but it achieves a kind of greatness all its own. They don’t make movies like this any more. In fact nobody ever made movies like this. Except Paul Verhoeven and Joe Eszterhas.

It’s essential to realise that the film’s trashiness and emotional emptiness and it’s unerotic eroticism are deliberate. These were not mistakes on the part of the director and the writer. They were conscious choices.

Showgirls flopped badly on its original release but has since made a ton of money.

Showgirls has had quite a few DVD and Blu-Ray releases (testifying to its enduring cult appeal). The UK Blu-Ray from Pathé offers a good transfer with a few extras. I reviewed the DVD release of Showgirls quite a few years back.

There is no other movie quite like Showgirls. It’s totally off-the-wall but it’s hypnotic and insanely entertaining once you allow yourself to become immersed in its bizarre alternate universe. It creates its own genre. Personally I just love this movie, almost to the point of obsession. Highly recommended.
Posted by dfordoom at 20:14

Have you seen Verhoeven's Elle? It's a fine and very original movie. Isabelle Huppert is quite astonishing in it.

I really appreciate your review, and much of it reflects my own thoughts. My simplification of SHOWGIRLS is FLASH GORDON MEETS STRIPPERS. Both movies are totally outlandish, often extremely campy, surely very entertaining, and above all visually astonishing. I highly recommend it, but with a caveat: don't take it seriously. And a glass of an adult beverage helps. :)

No, I haven't. I've only seen his more well-known American films. I guess I should explore his filmography in a bit more detail. Thanks for the recommendation.

Randall Landers said...
"I highly recommend it, but with a caveat: don't take it seriously. And a glass of an adult beverage helps. :)"

Yes, I agree with that. In fact the more adult beverages you consume the better the film gets!