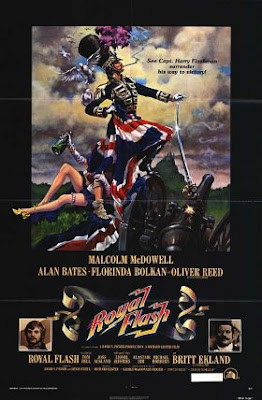 Harry Flashman is a coward, a cad, a liar and a bully. His principal interests in life are gambling and whores. He is also a certified military hero, the only survivor of the gallant defence of Piper’s Fort in Afghanistan in 1842. At the time the relief column arrived he was in fact desperately trying to save his own skin by surrendering the fort, but when his unconscious body was found wrapped in the British flag appearances suggested that here indeed was a Noble Manly Hero. While still basking in this totally undeserved glory Flashman encounters an up-and-coming German politician named Bismarck in the company of the notorious courtesan Lola Montez, with fateful consequences both for himself and for the history of Europe. Royal Flash, the 1975 film based on the second of George MacDonald Fraser’s immensely successful series of Flashman novels, seemed to have most of the ingredients required for a hit movie – director Richard Lester was riding high after the enormous success of The Three Musketeers and its sequel, the movie’s cast included a galaxy of British acting talent, the locations were simply gorgeous, it was photographed by the great Geoffrey Unsworth, and it offered a combination of adventure, comedy and romance. Alas, it was not to be, and the movie failed at the box office. I suspect it failed partly because in order to really enjoy the Flashman novels the reader requires at least a cursory knowledge of 19th century history, and mainstream cinema audiences were likely to be left somewhat perplexed by the plot. If you don’t have at least a rough idea of Bismarck’s historical significance and the course of German unification, and if you’ve never heard of Lola Montez, you’re going to miss much of the fun, which relies on the skilful and witty way in which Fraser (who also wrote the screenplay) weaves together historical facts and the career of his mythical anti-hero. It’s also a slightly quirky movie, with lots of odd but delightful little visual flourishes and in-jokes (there are some wonderfully fanciful Victorian gadgets that give the movie almost a steampunk feel at times). And it’s also possible that movie audiences simply couldn’t accept the idea of an adventure film with such an outrageous scoundrel as its hero. Be that as it may, the elements that ensured the movie’s commercial failure are the very elements that make for cult success and Royal Flash has over the years accumulated a small but devoted following.

Malcolm MacDowell is fun as the unscrupulous and unapologetic rogue Flashman, Alan Bates is delightfully villainous, Florinda Bolkan is glamorous and charismatic as Lola Montez and Oliver Reed gives one of his most memorably sinister performances as Bismarck. Bob Hoskins, Alastair Sim, Michael Hordern and Lionel Jeffries give great support in minor roles, and even Britt Eckland is surprisingly good as the ice princess Flashman finds himself forced to marry. Royal Flash is highly entertaining and looks glorious, and the recent DVD release from Fox (which comes with some very tempting extras) should do much to rescue this movie from undeserved oblivion.
Posted by dfordoom at 18:49