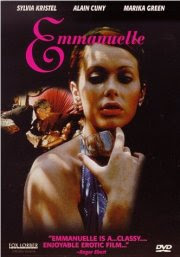 The DVD release is one of those instances where the extras are possibly more interesting than the movie. It contains two superb documentaries. The first is An Erotic Success: The Making of Emmanuelle and it’s a fascinating account of the utter chaos that accompanied the shooting of the movie – with first-time feature director Just Jaeckin not having a clue how to make a feature film, with lead actress Sylvia Kristel unable to speak a word of French, with male star Alain Cuny not merely disinterested but actively hostile, major problems with the authorities in Thailand where most of the shooting took place, and to cap it all off the film had to be processed in France so the crew were filming the movie without being able to see any of the footage they’d shot. Right up to the moment the film was released almost everyone concerned with the making of it was so convinced it would be a disaster that they declined the producer’s offer of shares in the profit. Now weren’t they kicking themselves when it started shattering box office records! Soft Sell: Emmanuelle in America is almost as interesting, especially the sections dealing with the promotion of the movie (one of the most successful promotional campaigns in history).

So what about the movie itself? Emmanuelle is a diplomat’s wife who arrives in Thailand to join her husband. They have an open marriage. Emmanuelle has not yet taken advantage of this arrangement, but now she decides it’s about time she did. She sets out to explore her sexuality. The exploration starts on the plane taking her to Bangkok, this being possibly the most famous scene in the movie. In Thailand the diplomat’s wives have little to do, and they deal with the boredom by bed-hopping. Emmanuelle engages in some light-hearted lesbian flirting, although her friend Ariane soon persuade her to do more than mere flirting. Emmanuelle plays at love as well as sex, with a lady archaeologist, but makes the mistake of really falling in love. She also finds herself drawn into the erotic games of a much older man, Mario, and discovers some fascinating and at time frightening pleasures.

The movie unquestionably has some major flaws. It’s slow. It has lengthy philosophical speeches rather clumsily shoe-horned into the dialogue. It’s a movie that is very self-consciously arty. And for a movie that was considered softcore porn it really doesn’t have all that much nudity and sex. On the other hand it does look magnificent. Breath-taking locations, and production values and cinematography that would never be seen again in this type of movie. And never will a movie like this be shot on 35mm film. The acting varies quite a bit. Alain Cuny as Mario (the only name actor in the production) is simply awful. Sylvia Kristel’s strangely detached performance was undoubtedly partly the result of her having to learn her lines phonetically, and often literally not knowing what she was saying. Oddly enough it works, and it makes her more intriguing and also more convincingly naïve. All the actresses look like real women, rather than silicone-enhanced walking advertisements for the cosmetic surgery industry.

Despite its flaws, it works. It works because it really does make an attempt to see sexuality from a female perspective – it’s not always successful in this, but at least the attempt was made. And it works because it really does avoid looking sleazy. The sex scenes are aesthetically pleasing. And at times it does generate some real erotic heat – the celebrated sex-on-a-plane scene is very very sexy. Not to mention the notorious girl-smoking-a-cigarette scene (a scene considered too shocking for American audiences). Unusually for this type of film, the lesbian sex scenes are not included for mere titillation – Emmanuelle’s affair with her lady archaeologist is the real thing, this is real love, it’s central to the plot, and the affair is handled with both sensitivity and passion. The rape scene is one that troubled many feminists at the time (and it troubled the British censor so much it was cut entirely for the British release). Camille Paglia argues (in the accompanying documentary) that this is actually a dream sequence, and I’m inclined to agree with her. In fact it make little sense otherwise. Paglia also argues passionately and enthusiastically that the movie is, overall, a very positive and pro-feminist film, and again I find myself agreeing with her.