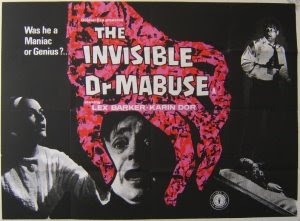 The Invisible Dr Mabuse (1962) is one of the many many sequels to Fritz Lang’s original 1922 silent classic Dr Mabuse The Gambler. That film was not only a masterpiece of German Expressionism, it was directly and indirectly an influence on the development of countless movie genres - the film noir, the spy film, the science fiction film and the mystery thriller. Dr Mabuse became a legendary figure, a German equivalent of Sherlock Holmes’ nemesis Professor Moriarty, an evil genius sitting like a malevolent spider at the centre of a web of deception and corruption. No matter how many times it seemed that Dr Mabuse had finally been destroyed, he just kept coming back for the next sequel. The Mabuse movies, like the Edgar Wallace krimis with which they had much in common, were a staple of the German film industry in the 60s.

The Invisible Dr Mabuse has everything you’d expect in a Mabuse film and more. It has the great diabolical criminal mastermind himself, an evil clown, a top-secret scientific project of such importance that the fate of civilisation is at stake, a mad scientist, a beautiful actress, glamorous showgirls, unlikely gadgetry and some of the most gloriously silly technobabble ever committed to celluloid. The plot involves Operation X, an ingenious scientific invention that allows light beams to pass through the gaps between particles of matter, thus making an object (or person) effectively invisible. FBI agent Joe Como has battled Dr Mabuse before, and is convinced that he is still alive and plotting to get his hands on this invention. The FBI and the German authorities believe that Mabuse is dead, but Joe Como can recognise a Dr Mabuse plot when he sees one.

The cast includes plenty of faces that will be familiar to fans of 1960s German movies of this type, with Lex Barker as Joe Como, Karin Dor as the beautiful actress involved with the mad scientist, and Wolfgang Preiss playing two different roles. Harald Reinl had plenty of experience directing this type of movie and keeps the action moving along nicely. It’s not as good as the previous year’s The Return of Dr Mabuse but it’s still a great deal of fun.
Posted by dfordoom at 22:13