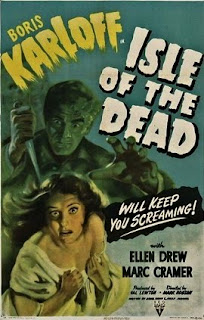 Inspired by Arnold Böcklin’s painting of the same name, Isle of the Dead is perhaps the most under-appreciated of all the Val Lewton RKO horror movies. It was released in 1945.

During the First Balkan War in 1912 an American war correspondent named Oliver Davis joins a Greek general (General Pherides, played by Boris Karloff) in a journey to a small island. The island is a cemetery, an island of the dead, where the general’s wife is interred. To their surprise they find the island is inhabited by the living as well as the dead. An archaeologist has taken up permanent residence, and has been joined by a group of people fleeing the war. But death is about to reassert its dominion over the island - the travellers have brought plague with them.

General Pherides is determined to face death as a soldier. He has a plan of campaign worked out, and with the assistance of an army surgeon he intends not only to battle death, but to win the battle. The general’s faith in science is not shared by his companions, and the old peasant woman Kyra who serves a housekeeper is convinced that the young companion of the wife of an English diplomat is in fact a vorvolaka - a kind of female vampire.

General Pherides is a man torn between a belief in progress and science on the one hand and the beliefs and superstitions of his youth on the other. That conflict provides the movie with its principal theme, with Greece being a country torn between the modern world and the almost overwhelming burden of the past. As his war against death falters and death claims one victim after another the general finds the pull of the past and of traditional beliefs more and more difficult to resist. There’s also a subplot involving premature burial that adds to the atmosphere of impending doom and steadily growing fear. 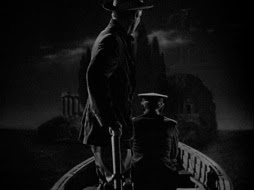 Karloff gives one of his best performances, playing a man who is neither hero nor villain, although at times he seems equally capable of filling either role. Helene Thimig is positively terrifying as the peasant woman Kyra.

This one has the visual style that distinguished the Lewton movies - lots of shadows, very film noir-ish. There are no real overt scares, but the psychological horror is built up very effectively and becomes almost unbearable, with the claustrophobic sets and the scenario of people trapped on an island of death being stalked by the plague adding to the horror. Mark Robson was at best a competent director but with Val Lewton’s guiding hand behind him he made a couple of excellent entries in the RKO horror series. 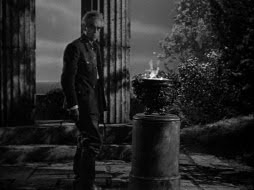 Very few people seem to like this movie, but to me it seems both an original idea and a well-executed piece of psychological horror. Like most of the Lewton movies it uses the supernatural as a motivation for the actions of the characters rather than being an explicitly supernatural movie.

This movie is included in Warner Home Video’s excellent Val Lewton DVD boxed set, a must-but for all serious horror fans. It’s quite a nice print too.
Posted by dfordoom at 01:15

An intriguing movie, inspired, IIRC, by a painting by the same name. Eerie painting, eerie movie, and Karloff is absolutely terrific. Not for everyone, but should be watched by all.

Randall, yes it's inspired by the painting of the same name by Swiss Symbolist artist Arnold Böcklin.