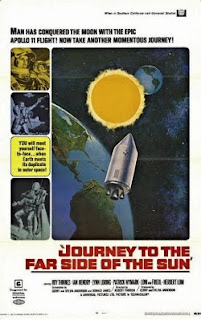 In 1969, with a string of enormously successful science fiction puppet shows behind them (Stingray, Thunderbirds, Captain Scarlet, etc) Gerry and Sylvia Anderson were keen to branch out into live action sci-fi. This led to the TV series UFO, possibly still the best British science fiction television program ever made. But immediately before UFO, they made the far less successful feature film Journey to the Far Side of the Sun (also known as Doppelgänger).

The biggest problem with this film is that it came out in the wake of Kubrick’s sensational, controversial, widely praised and widely condemned but impossible to ignore 2001: A Space Odyssey. And the shadow of 2001 hangs heavily over Journey to the Far Side of the Sun. Not that it’s by any stretch of the imagination a rip-off of Kubrick’s movie. The plot has nothing in common with it. But the feel of the movie is very similar. It seems to be aiming for the same arthouse/cult crossover audience as 2001. And although it’s a much shorter film, the pacing is just as leisurely.

It starts in a similar way to 2001, with an unexpected and mysterious discovery that leads to the mounting of a manned space exploration mission to investigate this perplexing find. The puzzle in question is the existence of a hitherto unknown planet, revealed by an unmanned probe launched towards the sun. This planet is the same size as Earth, it’s the same distance from the sun, and its orbit is identical to ours, except that it’s on the opposite side of the sun and has therefore remained hidden until now (yes I know the science there is fairly dodgy but hey this is the movies). Two astronauts are sent by the European Space Agency to 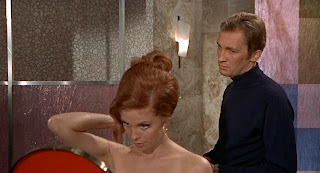 take closer look. The journey there and back will take six weeks. Three weeks later the mission ends with a crash landing, and when the chief astronaut is rescued he is surprised to be asked if he speaks English. But where exactly is he? The plot, with many variations, will not be unfamiliar to hardened sci-fi fans but I’ll still try not to give away the solution

American actor Roy Thinnes (best remembered today for the reasonably good 1960s science fiction TV series The Invaders) was imported to play the spacecraft pilot. His performance is less than riveting, and had the movie been made after UFO rather than before I suspect that the star of that series, Ed Bishop (who plays a supporting role here), might have landed the lead role, and would probably have made a much better go of it. The second member of the crew is a British scientist played by Ian Hendry, who gives much the same performance that he gave in every other role he ever played.

The movie’s arty pretensions don’t quite come off, and Gerry and Sylvia Anderson would have been well advised to stick with the formula that worked so well for them on TV, combining interesting science fiction ideas with reasonably strong characterisation and a healthy dose of action and adventure. Journey to the Far Side of the Sun just takes itself a bit too seriously. It’s certainly not a complete write-off tho 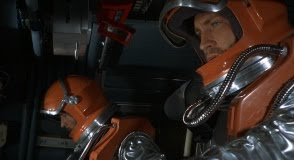 ugh. The movie wisely doesn’t try to explain too much and retains some aura of mystery. The special effects are what you expect from the makers of Captain Scarlet, UFO and Space: 1999 - in other words they make very extensive use of models and they look extremely good. The movie as a whole looks terrific, with cool 1960s sets and costumes.

It’s a bit of an oddity, but worth a look, and as well as Ed Bishop you’ll also spot several other members of the cast UFO including George Sewell. Plus there’s a cameo by Herbert Lom, always a plus.

Yes! I remember seeing this film as a kid about 30 or so years ago... isn't the twist, as such, the fact the hero ends up on a mirror image of Earth? Okay I know I maybe plot spoiling here...

Yep, and the original title was Doppelganger, which is probaby more appropriate. The twist is actually handled quite well.