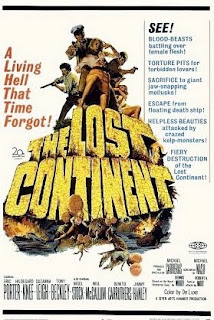 Hammer made movies in an extraordinary variety of genres over the years but I don’t think they ever made another film quite as odd as The Lost Continent. It’s a science fiction horror adventure thriller and it features some of the weirdest (and most effective) visual imagery in all of Hammer’s output.

The film is based on a Dennis Wheatley novel, Uncharted Seas. I haven’t read the novel but there seems to be a very obvious debt to William Hope Hogson’s The Boats of the Glen Carrig, one of the strangest novels ever written.

As the tramp steamer Corita leaves port bound for Caracas it is intercepted by a customs launch but the Corita’s captain ignores the customs officers’ orders to heave to, and the Corita heads for the open sea. It isn’t long before we discover why Captain Lansen was so anxious to avoid the annoying formalities of a customs inspection. Both his cargo and his passengers are equally dangerous and illegal.

The cargo comprises dozens of drums of a high explosive called Phosphor-B. It’s an illegal cargo at the best of times, but given the fact that this steamer is totally unseaworthy and is uninsured and that Phosphor-B explodes on contact with water it’s an even more illegal undertaking. The passengers are all in need of a passage anywhere out of the country. They’re all on the run from something. Captain Lansen is b 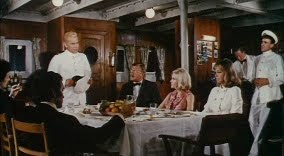 roke and wants to retire. The high-risk cargo and the high-risk passengers should bring in a sufficiently healthy profit to allow him to sell his ship for scrap and retire comfortably.

Which would be all well and good except for the fact that the Corita is heading straight for a hurricane. It’s only a matter of time before disaster strikes. After various adventures and intrigues involving the ill-assorted passengers and the mutinous crew the ill-fated steamer finds itself trapped in a strange sea covered by a bizarre and deadly sea-weed. With the propellors hopelessly fouled the ship drifts into what turns out to be a strange and unknown world.

At this point what appeared to be a rather melodramatic thriller suddenly becomes something very different and much much stranger. We’re entering a lost world, a vast sea covered so thickly with the deadly weed that people can walk cross it, a sea dotted with islands and with scores of wrecked ships dating back for many centuries. There are people living in this lost world, two bizarre cultures constantly at odds with one another. One is ruled by a 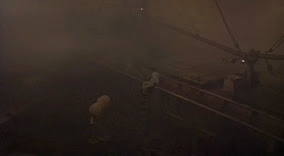 boy who claims to be descended from an ancient Spanish conquistador. He also claims to be a god. And there are monsters in this strange world.

The cast is headed by Eric Porter as Captain Lansen, a rather ambiguous character. He’s a crook and a liar but with a strong streak of unexpected heroism.

This particular movie was not only produced by Michael Carreras but directed by him as well. The real stars are cinematographer Paul Beeson and production designer Arthur Lawson. They give the movie the right other-worldly atmosphere, and the sepia-wash photographic look of the movie is very moody and quite spooky.

It’s a brave attempt to do something radically different. It doesn’t really succeed, but it’s an interesting failure, and it’s entertain 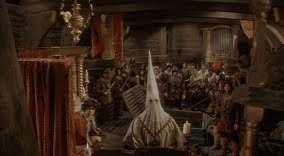 ing in its own way. It has some pacing problems but once the lost world is reached the sheer weirdness of it all makes the journey worthwhile.

My copy came as part of a Hammer two-movie set from Anchor Bay, paired with The Reptile. The two movies don’t really have anything in common apart from the fact that they’re both oddities and they’re both somewhat underrated. The set also includes a couple of episodes from the World of Hammer TV documentary series.

The Lost Continent is definitely a film for those with offbeat tastes, and a liking for high camp also helps. I enjoyed it but if you’re expecting anything resembling Hammer’s better-known gothic horror movies you may be disappointed.
Posted by dfordoom at 23:16

This is good fun - unintentionally camp with some suitably weird and psychedelic imagery.