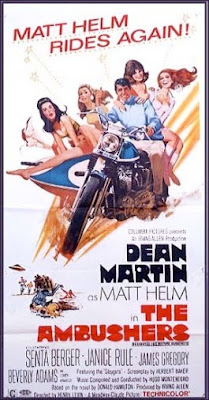 Even if you’re a fan of 1960s spy spoof movies you may find the Matt Helm movies to be a bit of an acquired taste. And The Ambushers, the third in the series, has a particularly poor reputation.

There’s no doubt that The Ambushers is a very silly movie, with amazingly goof (and cheap) special effects. But it’s intentionally silly. Whether you enjoy the silliness is of course a matter of taste. There were two main approaches to making spy spoof movies in the 60s. You could try to retain at least a semblance of a proper spy movie plot but play it for laughs as well as thrills. Or you could abandon any pretense of plausibility and play it purely for laughs The Matt Helm movies, and especially The Ambushers, fall into the second category. 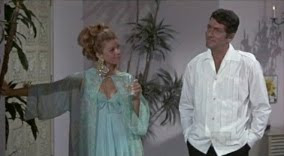 ut for revenge on her former captors.

There’s also another glamorous female, played by Senta Berger, and she also wants revenge on the same gang of bad guys. That’s it really. Very little in the way of plot twists or double-crosses. Mostly it’s just a romp and an opportunity for Dean Martin to make lots of wisecracks.

Dean Martin doesn’t bother to act, he just plays the role as Dean Martin, but that appears to be intentional. It provides an excus 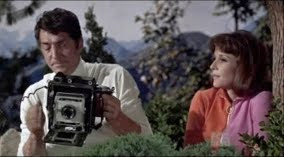 Senta Berger doesn’t do too much apart from looking like the typical glamorous eurobabe as femme fatale but she does it with a certain amount of style.

The film’s greatest strength is the chemistry between Dean Martin and Janice Rule who plays Sheila Sommers. It’s not so much actual romantic chemistry as comic che 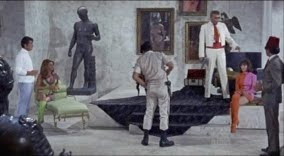 mistry. Ms Rule understands exactly what is required of her and the interchanges between her and Martin really do sparkle. She’s by far the best thing about this movie.

Being a 1967 movie aimed squarely at the widest possible audience it’s all very tame. The violence is cartoonish and jokey, with the hero threatened by drowning in a vat of beer being a typical example. Being Dean Martin he doesn’t find the idea of total immersion in alcohol scary in the least. The sexiness is confined to lots of innuendos and girls in bikinis.

The fact that Matt Helm’s secr

etary is a gorgeous young woman who rejoices in the name of Lovey Kravesit gives you an idea of the general tone of the movie. That, and the fact that the female agents of ICE conceal most of their high-tech gadgetry in their bras.

In fact it’s a bit like an American version of a Carry On movie, with the same sort of cheeky but good-natured abundance of double entendres and the same air of general lunacy. It’s certainly closer in spirit to Carry On Spying than to a James Bond movie.

If you’ve never seen a Matt Helm movie it’s perhaps best not to start with this one. The Silencers would possibly be a much better choice. But The Ambushers is still harmless fun, and it certainly has a wonderful 60s vibe to it.
Posted by dfordoom at 18:27

Hey pallie, likes thanks ever so much man for featurin' our Dino in your review of "The Ambushers." Couldn't agree with you more that the Helmer capers are pure and simply our Dino doin' what he does best...playin' our Dino. "The Ambushers" is truly the least of the quartet (I loves numero duo most, "Murders' Row) it is still great fun to watch our great man havin' such fun on the big screen...never was, never will be anyone as cool as the King of Cool...oh, to return to the days when Dino walked the earth...btw, knows that your review will be featured soon at ilovedinomartin...hopes you will do more reviews of our beloved Dino's flicks....

Hey pallie, likes man just a wee bit of patter to lets you know that ilovedinomartin is rerunnin' your great great words of Dino-wisdom on our great man in Helmer 3. Sure all the pallies gathered 'round our humble little Dino-blog will digs your Dino-reflections!