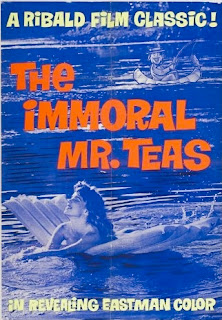 Russ Meyer had several claims to fame as a film-maker. He was one of the outstanding combat cameramen of World War 2. He made some of the most legendary outrageous (and innovative) camp classics of postwar cinema, such as Faster, Pusscycat! Kill! Kill! and Beyond the Valley of the Dolls. He directed the movie that made X-rated movies mainstream (Vixen).
And he invented the nudie-cutie.

The nudie-cutie was a fascinating product of its times. The US Supreme Court had ruled that nudity was not in itself obscene. This opened the door to exploitation film-makers, but they still had to tread warily. They could get away with nudity, but not with sex.
So the trick was to find a way to make movies that included lots of totally non-sexual nudity. 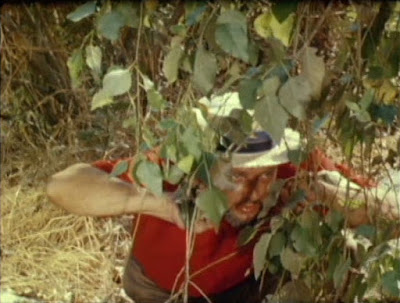 There were two ways of solving this problem. The first was the nudist camp movie. The problem with these was that people could only take so much volleyball. Even nude volleyball. The nudie-cutie on the other hand combined skin with comedy and relied on finding amusing and ingenious excuses for the display of naked female flesh.

Meyer was probably the person best qualified to invent this genre. He’d been a very successful photographer for magazines such as Playboy. These being the glory days of cheesecake photography when the erotic frisson of such photos depended more on the skill of the photographer than on the explicitness of the images Meyer had had plenty of practice in finding ways to make nude photography interesting, glamorous and imaginative. He applied the same aesthetic to the nudie movie. And since Meyer had (as he was to demonstrate many times later in his career) a knack for visual humour and for corny but genuinely amusing gags it’s not surprising that his first foray into the nudie-cutie genre, The Immoral Mr Teas, went on to make him a truckload of money. 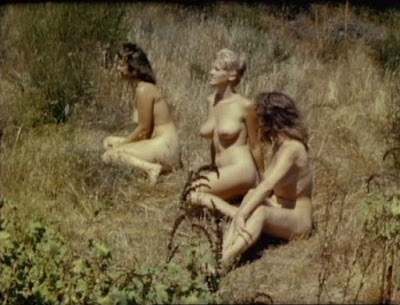 The plot of the film is about as minimalist as you can get. The mild-mannered Mr Teas is so obsessed by the pretty women who seem to be everywhere about him that he can’t help undressing them with his eyes. In fact his obsession has gone so far that they really do appear to him to be naked. This neatly sets up the excuse for the nudity.

The movie starts off rather sedately, with the emphasis being more on the gags than on the skin, and by the halfway point you might well be wondering what all the fuss was about. The pace certainly picks up though, and the second half has enough unclothed female pulchritude to satisfy even someone as obsessed as Mr Teas. 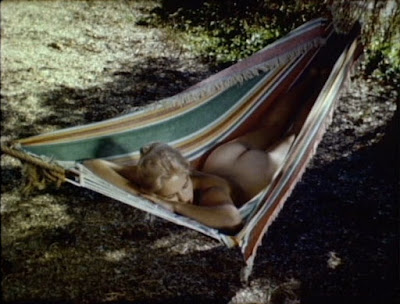 In the 1950s American audiences had flocked to art-house cinemas to see European movies like And God Created Woman. A tantalisingly brief glimpse of Brigitte Bardot’s bare bottom was enough to guarantee a very healthy box-office. There was certainly no doubt about what American audiences wanted to see, and the nudie-cutie became a very profitable genre indeed.

But apart from the copious amounts of nudity, is The Immoral Mr Teas worth seeing for anything other than its historical value? I think it is. Meyer was already a very accomplished cinematographer and there is nothing crude or amateurish about this production. He hadn’t yet developed his distinctive and revolutionary approach to film editing but the movie still manages to be reasonably entertaining. It might not seem to have too much in common with Meyer’s later masterpieces but as with all his movies it’s obvious that it’s been made by someone with a genuine flair for making movies, someone who is considerably more than a mere hack. 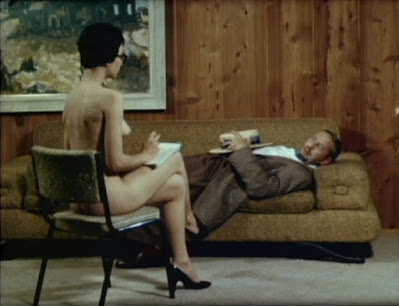 It’s not great cinematic art, but it’s good-natured harmless fun. And it does mark the feature film debut of one of America’s most interesting film-making talents (his earlier lost movie French Peep Show was just a burlesque movie, more or less just a filmed burlesque show, so I think it’s reasonable to describe The Immoral Mr Teas as his first real movie.

The Immoral Mr Teas is highly recommended as being the most pure example of the nudie-cutie.
Posted by dfordoom at 17:13

Thank you for a great review and also an initiated presentation of Russ Meyer.

In my opinion his only equal in film history is Jean-Luc Godard. They both invented their own way of filming and I never get tired of watching their masterpieces.

Keep up the good work, and please don't stop reviewing cult movies. Your site ought to be more famous than it is. Since it is truly the best!