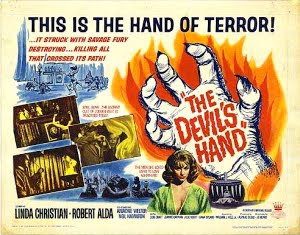 I’m a sucker for movies involving voodoo dolls so I’m probably a bit biased but for my money The Devil's Hand is good cheesy fun.

Rick (Robert Alda) is being troubled by strange dreams about a glamorous blonde. When he and his girlfriend Donna wander into a doll shop and find not only a doll that bears an uncanny resemblance to Donna but also a doll that is the spitting image of the blonde from his dream he starts to get worried. And curious. Donna on the other hand just thinks he’s been playing around with this blonde on the side.

The blonde turns out to be real, and she has mind control powers. She forces Rick to come to her apartment and basical 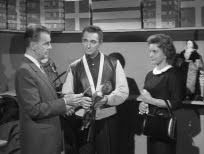 ly tells him he belongs to her now. I have to say that Rick doesn’t put up much resistance. Poor Donna is soon forgotten.

The blonde’s name is Bianca and she works in the doll shop, which is in fact a front for a cult of voodoo devil-worshippers. The cult leader is the man who runs the doll shop, Francis Lamont. The cult promises its followers wealth and power. For those who might feel tempted to betray the cult there are loyalty tests. The cult member is placed on an altar and a wheel with knives attached is lowered onto them. If the devil god 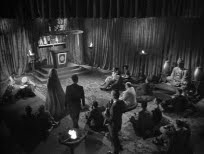 Gamba knows they are loyal the knives turn out to be rubber, but if they are traitors the knives are real and death awaits them.

Rick is a loyal cult member but he also still cherishes a soft spot for Donna who has been afflicted with serious heart disease by means of a needle plunged into the doll that represents her. Can Rick balance his devotion to Gamba and to his new blonde girlfriend with his desire to prevent Donna from being harmed? 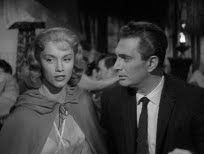 ere’s no gore and to be honest there’s not much in the way of genuine scares. On the other hand there’s plenty of camp fun and entertaining cheesiness. There are voodoo ceremonies complete with bongo drums and black dancers (to add some exoticism). The knife-armed wheel of death is embarrassingly low-budget but this makes it more fun.

This is part of the Mill Creek 32-movie Drive-In Cult Classics boxed set. It seems to be uncut and the transfer is watchable if not brilliant.
Posted by dfordoom at 16:37

This is perfect camp because it seems to be utterly clueless about its material in casting someone like Hamilton as a decadent cultist. There's also something mildly unsettling about its implicit equation of race-mingling (there are Asians in the cult, as I recall) and devil worship, but that only adds to the camp value.