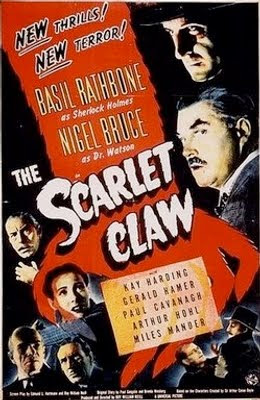 In fact The Scarlet Claw is probably as close as this series came to a horror/mystery crossover film.

Holmes and Dr Watson are in Canada for a conference on the occult, chaired by Lord Penrose, when news is received that Lady Penrose has been found dead. Her throat has been slashed, but whether by a human, an animal or some supernatural beast is yet to be determined. The wounds are almost identical to those found recently on local livestock in the vicinity of the village of La Mort Rouge, and those attacks have been widely blamed on a supernatural creature. Local legend has it that this creature appears at lengthy and irregular intervals.

Lord Penrose being a firm believer in the supernatural is naturally inclined to attribute his wife’s death to this monster. While Sherlock Holmes is prepared to keep an open mind, 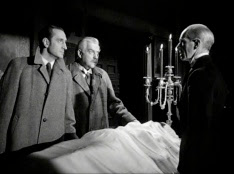 he is much more inclined to suspect murder, and to suspect a very human murderer. Lord Penrose is not keen on having Holmes investigate the case, but when Holmes receives a letter written by Lady Penrose the day before her death, a letter in which she speaks of a threat to her life, there is no stopping him from becoming involved.

It is not long before Holmes has an encounter himself with the famous monster, and begins to unravel a mystery involving murders in a touring theatrical company and several people who are not the people they appear to be. 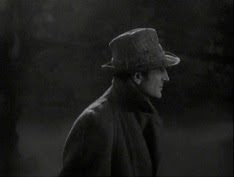 ery little difference to this film. I always think of Universal’s Sherlock Holmes films in much the same way I think of Hammer’s horror films - as taking place in a kind of imaginary world, in this case a blending of the 1940s with a dash of the 1890s and a setting that is not really Baker Street in London but Baker Street at Universal Studios. So having this film set in a Canada located on Universal’s back lot doesn’t disturb me.

The big problem with Universal’s genre films was always their conviction that such films needed to have comic relief. This comic relief ruined many of their horror films. The Sherlock Holmes movies also had to have comic relief, but they were more fortunate in that it was provided mostly by Nigel Bruce as Dr Watson. While this annoys Sherlock Holmes purists who dislike seeing Watson portrayed as a buffoon it does at least have several advantages - Ni 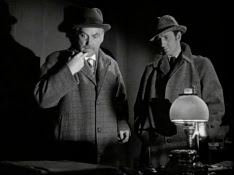 gel Bruce was a capable comic actor and his Dr Watson was basically likeable, so the comic relief is rarely annoying. At times it’s even actually amusing.

In this outing both Basil Rathbone and Nigel Bruce are in good form. They have a competent if not overly exciting supporting cast.

Roy William Neill does his usual competent job as director. Being a Sherlock Holmes story you don’t really expect for one moment that the supernatural explanation is going to stand up to Holmes’s scrutiny, but Conan Doyle included suggestions of the supernatural and elements of horror in several of his original stories so it’s a perfectly valid plot device in a Holmes movie.

There’s an abundance of plot twists, Dr Watson gets to act the fool but he also gets to save Holmes’s life, and there’s plenty of entertainment to be had. The Scarlet Claw is a great deal of fun.
Posted by dfordoom at 00:41

Hi, here via LJ. Your view of the comic relief being well upheld by Bruce brings to mind the radio program that they did in the forties. I used to be part of an old-time radio club and only heard /of/ it and not actually experienced it, but the roles were switched, Rathbone being the earnest bumbler and Bruce taking on the mantle of Great Detective, for one episode only. How fun it would be to find that someplace!