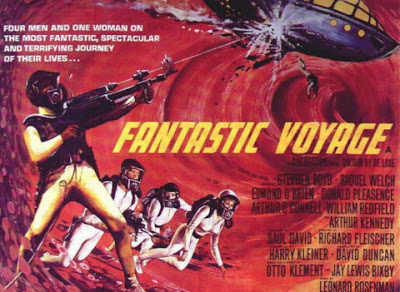 Of all silly science fictional ideas few are sillier than the idea of miniaturisation. But if you’re going to make a movie centred on an absurd idea the important thing is to have the courage to pursue that idea regardless of where it might lead. And Fantastic Voyage certainly does that. Even more important, it’s necessary to treat the ludicrous central idea as if it makes perfect sense, and Fantastic Voyage does that as well.

Both the US and Soviet governments have been working on miniaturisation projects. They can shrink anything, or anyone, to a tiny fraction of its actual size. The drawback is that the process is only good for 60 minutes after which time the person or objec

t reverts to its real size.

A leading scientist on the American side has however made a breakthrough that allows the miniaturisation process to work for an indefinite period. It goes without saying that the Russians are terrified of the prospect of facing whole armies of tiny tiny American soldiers equipped with tiny tiny tanks and tiny tiny guns. So they attempt to kill the scientist in question. They go within a hair’s breadth of success - the scientist is left with a bullet lodged in his brain in such a position that an operation would be impossible.

A daring scheme is hatched to save the situation. A new experimental subma

rine, with a crew that includes a top neurusurgeon and his assistant, will be shrunk to miscroscopic size and injected into the bloodstream of the stricken scientist.

To reach the brain they will have to brave many perils, including attacks by marauding antibodies and by the dreaded white corpuscles. This is all rendered with some delirious 1960s psychedelic-style special effects. Of course none of it seems to even remotely resemble the inside of the human body - it’s more like a combination acid trip and ann underwater caving vacation on an alien planet.

So what could possibly make such a movie

even more fun? How about Donald Pleasence as the delightfully bonkers scientist in charge of the submarine team. He delivers a classic Donald Pleasence performance. Edmond O’Brien does some glorious scenery-chewing as well as the stressed-out general in charge of the miniature warfare program. Arthur Kennedy as the neurosurgeon who must operate on the brain from the inside seems constantly on the point of imploding. Stephen Boyd provides the expected heroics while Raquel Welch is on hand to add some glamour as the surgeon’s faithful assistant. Miss Welch would go on to develop a considerable talent for scenery-chewing herself in movies like Myra Breckinridge but in 1966 that talent had not yet blossomed. There's nothing wrong with her performance, she simply isn't given enough to do.

This movie is included in the Raquel Welch Collection boxed set which I highly recommend if you can find a copy. It also includes the magnificently entertaining caper film Myra Breckinridge and the underrated crime thriller Lady in Cement (in which Miss Welch co-stars with Frank Sinatra) plus the offbeat western Bandolero - an eclectic but fascinating mix of films.

The DVD presentation preserves the Cinemascope aspect ratio and looks extremely good, but sadly there’s a distinct lack of extras.

Fantastic Voyage is a wonderfully entertaining piece of hokum and a superb example of the 60s high camp psychedelic style applied to science fiction.
Posted by dfordoom at 22:45

This is a movie I watched again and again as a kid, and loved every time. I rewatched on Netflix instant a few months back and still liked it, but for different reasons. The "psychedelic innards" aesthetic is very appealing to me, and I loved the "swimming via clearly visible wires" that most of the actors had to do. The corpuscle attack always terrified me as a kid, and it still works. But most fun was the heavy-handed Cold War stuff, exemplified chiefly by (spoiler!) Pleasence's turn as the undercover Commie doc. I mean, who would have thought that the sweaty, twitchy, militantly atheist scientist would turn out to be a Red? Shocking! :D

If they remade this one with super CG effects, I don't think I'd enjoy it quite as much. (I remember almost nothing about the similarly themed Dennis Quaid vehicle INNER SPACE, though.) It's the old Harryhausen argument--in fantasy films, I find a little clunkiness in the special effects only adds to the effect, making things seem much more strange and otherworldly than photorealistic CG would. But then I'm an old fart, so YMMV.