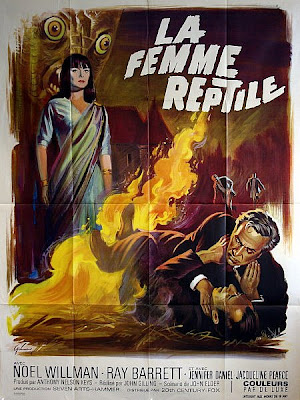 I’m going to be revisiting some lesser known Hammer movies in the next few weeks. First up is one of my favourites, The Reptile.

In 1966 John Gilling directed two movies for Hammer, both making good use of their Cornish settings and with a considerable overlap of cast and crew. Plague of the Zombies is the more highly regarded of this Cornwall duology (and it’s a great movie) but I have a definite soft spot for The Reptile.

Captain Harry Spalding (Ray Barrett) arrives in Cornwall with his new wife to take possession of his late brother’s cottage, Larkrise. Charles Spalding had died suddenly of a heart attack despite having no history of heart problems.

The locals seem not just sullen and unfriendly but also very uncomfortable in the presence of their new neighbours. Perhaps more than uncomfortable, perhaps even afraid. No-one is willing to talk to him, apart from the publican Tom Bailey (Michael Ripper). From Tom he discovers the story of the series of mysterious and terrifying deaths th 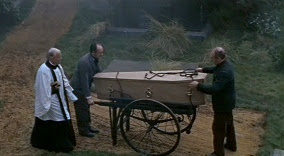 at have occurred in the village. Mr and Mrs Spalding also make the acquaintance of Mad Peter (John Laurie). When Mad Peter turns up at the cottage obviously dying and displaying horrifying symptoms they realise that the stories of mysterious deaths are more than just stories.

Even more disturbing are the inhabitants of the big house not far from the cottage, Dr Franklyn (Noel Willman) and his daughter Anna (Jacqueline Pearce). Dr Franklyn is a theologian who has spent years travelling through the east researching obscure religious cults. The atmosphere between Dr Franklyn and his daughter see 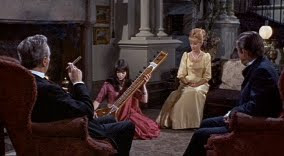 Anna seems keen to befriend the Spaldings while her father seems anxious not to allow any intimacy to grow up between them. Things come to a head when Captain Spalding receives a plaintive note from Anna and decides he must rescue her. He will find that things are not quit 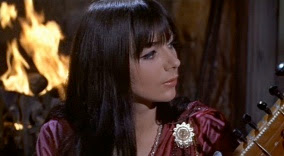 e as they appear. 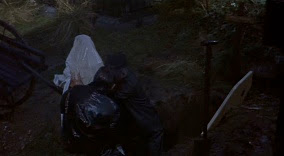 ighly when it comes to the atmosphere which is nicely overheated, with suggestions of forbidden things.

The acting is in fact generally go 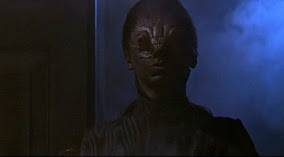 od. Ray Barrett makes a perfectly acceptable baffled but noble hero while Jennifer Daniel shows plenty of spirit as his wife Valerie. Noel Willman is creepy but not entirely unsympathetic. Dr Franklyn is not evil but he’s made one huge mistake and he’s never going to be able to escape the consequences. Michel Ripper gets a more substantial part than usual and as always he’s great fun.

The makeup effects are often regarded as the film’s weak point but I think they’re reasonably effective.

All in all it’s an underrated Hammer offering and well worth seeking out. The DVD release is still in print and it’s a solid transfer.
Posted by dfordoom at 14:10